Stage 1 History: Past and Present Transport 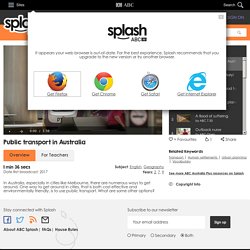 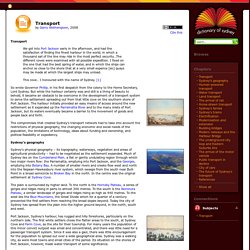 I fixed on the one that had the best spring of water, and in which the ships can anchor so close to the shore that at a very small expence [sic] quays may be made at which the largest ships may unload. How times change: Getting around. Transportation Facts for KidsEasy Science For Kids. Less than one hundred years ago, most people were born, lived and died within 100 miles or less. 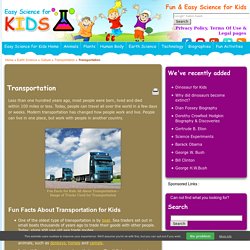 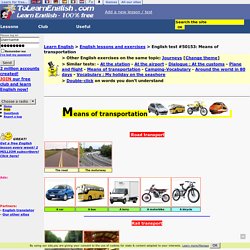 Modes of Transportation (land, air or water) Getting around - Look for clues. Transport Mini Encyclopaedia. Transport Timeline. A smarter future car - ABC online education. DR JONICA NEWBYAround the world, cities are beginning to choke on their own traffic. 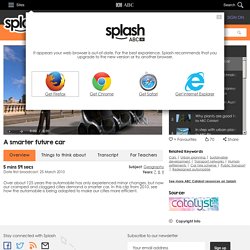 Yet, existing public transport has some frustrating flaws. Well, today, I came by train to avoid the rush hour, freeway, car park. Unfortunately, it's dropped me about 3km from where I want to go and it's about to rain. Wouldn't it be great if I could just pick up a little car here and drop it when I get there? Vidéos d'apprentissage pour les enfants. The penny-farthing. -Its a penny-farthing. 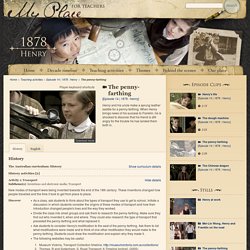 -Exactly. Its the transport of the future. How do you balance? Uh, practice. The seat looks uncomfortable. Well, yes, somewhat. You know, we could make a proper leather saddle with springs that could fit this machine. Cobb & Co. – an Australian transport icon. For 70 years from the 1850s to the 1920s, Cobb & Co. coaches were a principle means of transport in the colonies of Queensland, New South Wales and Victoria.

Settlers moving inland, new immigrants hopeful of success on the gold fields, shearers, agents, squatters, children and their parents—everyone used Cobb & Co. stage coaches to move, as efficiently as was possible, around the colonies. A cartoon of 1856 entitled Melbourne starts for the diggings that appeared in Melbourne Punch magazine. It shows men, women and children shopping for mining equipment and provisions in Elizabeth Street, Melbourne, before heading off to the diggings in Ballarat and Bendigo.

Image courtesy of the State Library of Victoria: mp025177. Legend of Cobb & Co. - Cobb+Co Museum. Freeman CobbWhen gold was discovered in Victoria in the 1850s people from all over the world rushed to the 'diggings' and mining settlements sprang up over night. 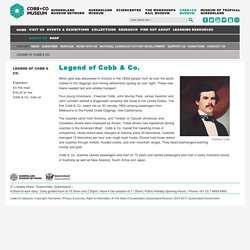 These new towns needed fast and reliable transport. Four young Americans - Freeman Cobb, John Murray Peck, James Swanton and John Lambert started a stagecoach company like those in the United States. The first Cobb & Co. coach ran on 30 January 1854 carrying passengers from Melbourne to the Forest Creek Diggings, now Castlemaine. Cobb & Co - When Cobb & Co was King. The Company's Beginnings Established with the intention of servicing the Victorian goldfields, Cobb & Co quickly developed to become the most successful company of its kind during the 19th Century, pioneering transport routes, delivering mail, gold and passengers throughout the country and contributing greatly to social growth and the expansion of pastoral settlement across Australia.

Cobb & Co was set up in Melbourne, Victoria in 1853 by a small group of immigrant Americans - Freeman Cobb, John Murray Peck, John B Lamber and James Swanton – and originally was called the American Telegraph Line of Coaches. Cobb & Co coaches: historical transport. IMAGINE, IF YOU WILL, that it's 1898 in Brisbane, Queensland. 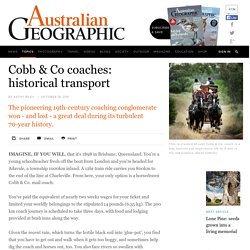 You're a young schoolteacher fresh off the boat from London and you're headed for Adavale, a township 1000km inland. A 12hr train ride carries you 800km to the end of the line at Charleville. From here, your only option is a horsedrawn Cobb & Co. mail coach. You've paid the equivalent of nearly two weeks wages for your ticket and limited your worldly belongings to the stipulated 14 pounds (6.35 kg). The 200 km coach journey is scheduled to take three days, with food and lodging provided at bush inns along the way.

The horse and carriage. Locomotive No. 1, Sydney - MAAS Collection. History of Rail in Australia. A brief history of Australia's railways appears below, but if you wish to access other information about historic railways, some links are provided here: Introduction. 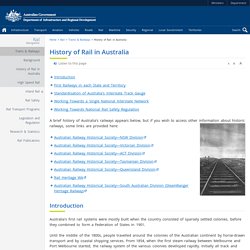 Australia’s transport industry has a fascinating history due to the fact our country throws hardships at operators due to climate extremes and some of the toughest terrain in the world. Equipment is really put through its paces, even today, and those pioneers who opened major trucking routes across the land in days gone by did not have the technology nor the power we experience today. In recent times transport operators and truck enthusiasts have recognised the need to restore those vehicles responsible for serving communities. History — Transport - State Transit. From double deckers buses with conductors, to PrePay only services on bendy buses. Just some of the changes that have occurred during 75 years of government bus services in New South Wales. Government bus services were introduced as result of the NSW Transport Act, which the Government introduced in 1931 as a way of rationalising and improving bus services.

Before the Act was introduced there were more than 200 private bus companies, many of which were operating the same routes. The first Government bus route was introduced on Christmas Day, 25 December 1932. By 1937 there were 37 routes. Historical information kindly supplied by Greg Travers. For more information about the history of government buses in New South Wales, read "The New South Wales Government Bus - a Diamond Jubilee" by Greg Travers.