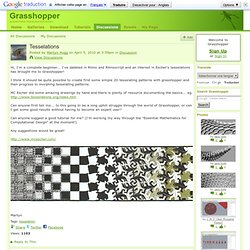 I've dabbled in Rhino and Rhinoscript and an interest in Escher's tesselations has brought me to Grasshopper! I think it should be quite possible to create first some simple 2D tesselating patterns with grasshopper and then progress to morphing tesselating patterns. MC Escher did some amazing drawings by hand and there is plenty of resource documenting the basics... eg. Can anyone first tell me...

Conical anamorphosis. Delete the duplicated curves. Using the Matrix component in the Maths tab. Sort Points is not sorting. 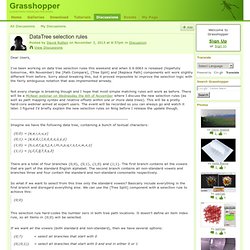 Sorry about breaking this, but it proved impossible to improve the selection logic with the fairly ambiguous notation that was implemented already. Not every change is breaking though and I hope that most simple matching rules will work as before. There will be a McNeel webinar on Wednesday the 6th of November where I discuss the new selection rules (as well as path mapping syntax and relative offsets within one or more data trees). This will be a pretty hard-core webinar aimed at expert users. Imagine we have the following data tree, containing a bunch of textual characters: Need Help Selecting Data from Tree. So I'm trying to make something like this Right now my data goes from {0,0,0,0} to {0,0,35,35} because there are 72 curves and 36 intersection points. 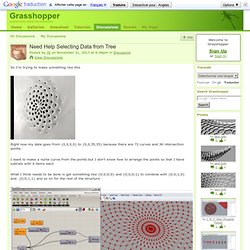 Multiple Domains in a List. Hi All, Big fan of grasshopper and these forums and I've always come here for help, this just happens to be the first time I couldn't find the answer to my question in a previous post. 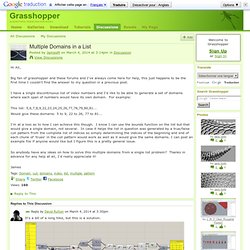 I have a single discontinuous list of index numbers and I'd like to be able to generate a set of domains where each span of numbers would have its own domain. For example: This list: 5,6,7,8,9,22,23,24,25,26,77,78,79,80,81... Would give these domains: 5 to 9, 22 to 26, 77 to 81... Simple list/tree question. RANDOM NORMAL OFFSET. I want to make a definition that: applying a surface. that might be oriented in any direction. will recognizes the direction of its normal. and applies an offset with a random value. to generate a non-planar delaunay mesh. here and image of what I have. but how could I tell to move randomly the points in the mesh normal direction? 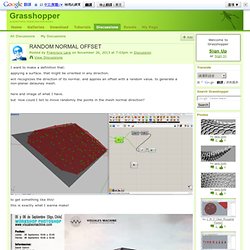 To get something like this! Local variations of the density of a random point distribution. Hi everybody! 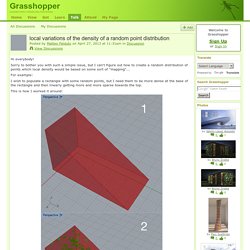 Sorry to bother you with such a simple issue, but I can't figure out how to create a random distribution of points which local density would be based on some sort of "mapping"... For example: I wish to populate a rectangle with some random points, but I need them to be more dense at the base of the rectangle and then linearly getting more and more sparse towards the top. This is how I worked it around: 1) first I have created a triangular prism, Subcurves out of list of points. Chaoyangmen Beijing SOHO III by Zaha Hadid Architects. Solid Metaball? Ive been expiramenting with the simple functions of the metaball. 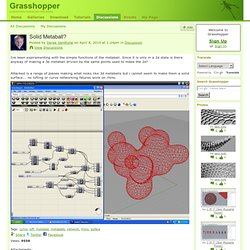 Since it is only in a 2d state is there anyway of making a 3d metaball drivien by the same points used to make the 2d? Attached is a range of planes making what looks like 3d metaballs but i cannot seem to make them a solid surface... no lofting or curve networking fetures work on rhino. Tags: curve, loft, metaball, metaballs, network, rhino, suface Attachments: Metaballxyz.ghx, 195 KB. 3D Metaball. It takes me a whole Morning to type the 256 arrays.And it takes much more time to caculate the 3d metaball. 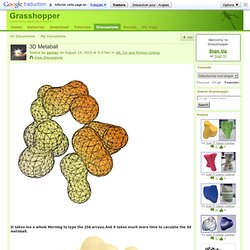 Tags: How to make an Twinkie? GHinc01. Image sampler point density. Non-Coplanar 'Tangents' Distribution of any objects according to curve and distance to attraction points. Single surface from multiple surfaces- not join- for evaluating surface. I was trying evaluate a the mobius strip, however have foudn this difficult as I cant creat it from a single surface. 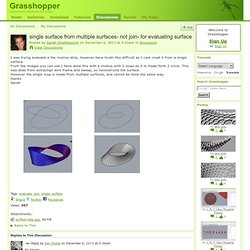 From the images you can see I have done this with a mobius with 2 loops as it is made form 2 circle. This was does from extractign wire frame and sweep, so reconstructs the surface. However the single loop is made from multiple surfaces, and cannot be done the same way. thanks Sarah. Changing point coordinates with height change. Hola everyone i am trying to move points on a grid in the y direction and relative to each other as their height grows in the z direction. so far i have only managed to sort them so i have their z coordinates in chronological order, and i assume i must use remap to keep some sense of order for the movement along the y axis. beyond that i haven't any idea how to do it! 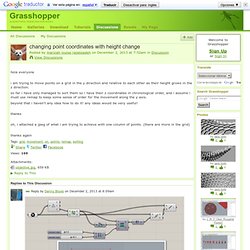 Any ideas would be very useful! Thanks. Rotating the grid 45 degree, more attractors. Line segmentation from intersection points. Tangent line between ordered circles. Hello Everyone! I need help with my project. I've already generated a line and divide it. I've created circles for each divided point of the line. I would like to create a TANGENT LINE between the circles ( continuously , so in order). I've already measured the distance between one center point and all the center points of the other circles.