Tips on Learning to Talk. Learning to talk is a process that starts at birth, when your baby experiences how voices can sound. 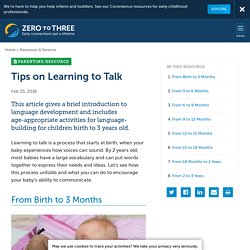 By 2 years old, most babies have a large vocabulary and can put words together to express their needs and ideas. Let’s see how this process unfolds and what you can do to encourage your baby’s ability to communicate. From Birth to 3 Months Your baby listens to your voice. He coos and gurgles and tries to make the same sounds you make. Sing to your baby. From 3 to 6 Months Your baby is learning how people talk to each other. Hold your baby close so he will look in your eyes.Talk to him and smile.When your baby babbles, imitate the sounds.If he tries to make the same sound you do, say the word again. From 6 to 9 Months Your baby will play with sounds. Play games like Peek-a-Boo or Pat-a-Cake. From 9 to 12 Months Your baby will begin to understand simple words. From 12 to 15 Months Babies begin to use words. Talk about the things you use, like “cup,” “juice,” “doll.” A few more myths about speakers of multiple languages.

Language teacher and researcher Miguel Angel Muñoz explains the latest research on how being bilingual affects your brain, ahead of a British Council seminar in Cardiff on whether learning a foreign language makes you smarter. You can watch the live-streamed seminar on Tuesday, 3 June. More than half the world's population uses two or more languages every day It is hard to estimate the exact number of bilingual people in the world, as there is a lack of reliable statistics . But in 2012, a Eurobarometer survey established that 'just over half of Europeans (54%)' are bilingual, and other studies hypothesise that more than half of the world’s population is bilingual. So what about you? Being bilingual isn't black-and-white To answer that question, first we need to establish what being bilingual means. I, for example, am -- or used to be -- proficient in German, but I have not used my German regularly for a very long time.

The Body Coach TV. Build Skills with Online Courses from Top Institutions. Patricia Kuhl: The linguistic genius of babies. Being Multilingual: The natives and the speakers. Let me start with the good news. 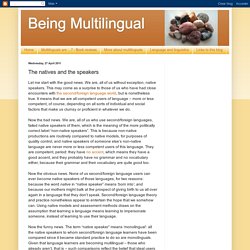 We are, all of us without exception, native speakers. This may come as a surprise to those of us who have had close encounters with the second/foreign language world, but is nonetheless true. It means that we are all competent users of language – more or less competent, of course, depending on all sorts of individual and social factors that make us clumsy or proficient in whatever we do. Now the bad news. We are, all of us who use second/foreign languages, failed native speakers of them, which is the meaning of the more politically correct label “non-native speakers”. Now the obvious news. Now the funny news. And now, the extremely funny news. Near-native-like users of languages could well make ideal candidates to international espionage agencies – barring suspicion that the enemy might also have access to millisecond-detectors, of course.

Thomas Paul Bonfiglio’s book, Mother tongues and nations. Being Multilingual: You speak with an accent. I don’t. Accents are things that only other people have. They are, by extension, things that you don’t want to have. Accents are, in short, shortcomings. This is why, if someone tells you that “you speak with no accent”, you can be sure of two things: that you have received words of praise indeed; and that you speak with the same accent as that person.

So the person is actually not only praising her own accent, she is also giving evidence that she has no idea she’s got one. We seldom hear people say “We speak with an accent” or “I speak with an accent” – unless we’re talking about our uses of foreign languages. So let’s check out your accent. This is (choose the nearest answer – I was going to say “the best answer”, but I suddenly remembered that “best” has prescriptive connotations): a tomahto a potahto a tomayto a potayto I could tweak this test a little, like this: 1.1 a tomahto. ENGLISH IN EARLY CHILDHOOD.