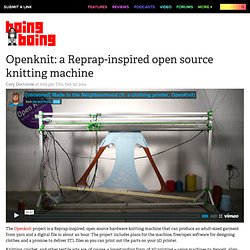 The project includes plans for the machine, free/open software for designing clothes, and a promise to deliver STL files so you can print out the parts on your 3D printer. Knitting, crochet, and other textile arts are, of course, a longstanding form of 3D printing -- using machines to deposit, align and interlock a feedstock to form 3D objects.

The Openknit garments are rather beautiful, as you can see from the Flickr set. If you're interested in understanding the underlying system, here's a good explanatory animation. It shows a high degree of ingenuity and skill on the part of the designers. Presently, production outsourcing has become the norm: mass fabrication of goods at low costs improves corporate profit margins but pushes precarious labour conditions due to a race to the bottom in competing developing markets. Cameron Sinclair: A call for open-source architecture. AngelBlocks : Lifestyle Automation For Everyone by Steve Montgomery. Unlike normal home automation that only works with lights and appliances, AngelBlocks works with all of your things, from your kitchen lights to your bathroom trash can. 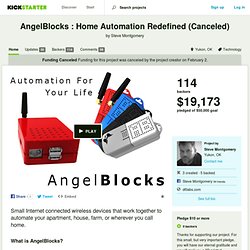 AngelBlocks are tiny, battery powered, wireless building blocks that can be attached to your things giving them the ability to sense and control the environment around them and to communicate with you using messaging and popular social media. Push an AngelBlock into your plant and it will text you when it gets thirsty. Stick one on your washer and get notified the instant your laundry is done. Place one in your car and it can automatically shut your garage door, turn off lights and appliances, and enable your home's security when you pull out of the driveway. AngelBlocks work together to create the most inexpensive, easiest to use, flexible home automation system on the market today. AngelBlocks “learn” their senses. Lasersaur Manual. 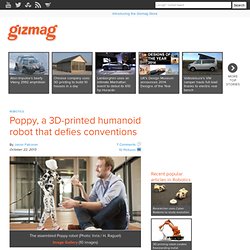 They were able to design, fabricate, and assemble a relatively large robot for around €8,000 (US$11,000) including servo motors and electronics. That's about a third the cost of commercial robots in the same size category like the RQ-TITAN, and is still cheaper than smaller humanoids like the Aldebaran Robotics NAO. And best of all, they plan to make their design open source. View all One of the ways they managed to keep the cost down is by using lightweight materials, which means the robot requires less powerful (and cheaper) servo motors. 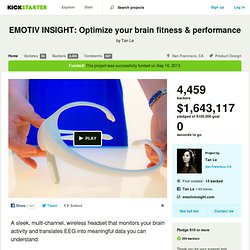 Over the course of this campaign, you joined our community and pledged to change how people think about their brain and how we could use brainwear to improve how we live, work, and play. Thanks to you, we are making the Emotiv Insight a reality! Thank you again for being such an awesome community! The human brain, our most advanced organ, is an intricate and complex network of connections.

Largely enigmatic, it’s our own personal machine that can extract patterns from overwhelming amounts of data. Emotiv Insight is a sleek, 5 channel, wireless headset that reads your brainwaves and a mobile app that translates those signals into meaningful data everyone can understand. Our brains are made up of a hundred billion nerve cells called neurons. Puzzlebox Orbit: Brain-Controlled Helicopter by Puzzlebox.

For the past two years Puzzlebox has been producing brain-controlled helicopters for classrooms and television. 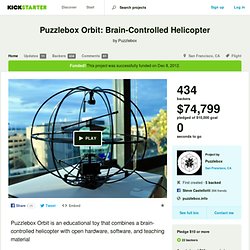 Now comes the chance to fly your own. The Purpose Join the experiment. We are building and selling this crazy new toy. Then we show everyone how we made it. Our overall goal is to explore an Open approach to Brain-Computer Interface (BCI) technology. Then we start the next experiment. The Product. Orbit Mobile Edition.

The Puzzlebox Orbit is a brain-controlled helicopter. 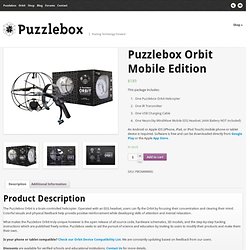 Operated with an EEG headset, users can fly the Orbit by focusing their concentration and clearing their mind. Colorful visuals and physical feedback help provide positive reinforcement while developing skills of attention and mental relaxation. What makes the Puzzlebox Orbit truly unique however is the open release of all source code, hardware schematics, 3D models, and the step-by-step hacking instructions which are published freely online.

Puzzlebox seeks to aid the pursuit of science and education by inviting its users to modify their products and make them their own.