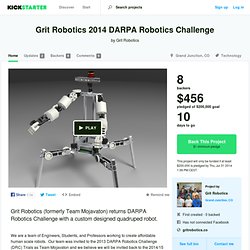 Our team was invited to the 2013 DARPA Robotics Challenge (DRC) Trials as Team Mojavaton and we believe we will be invited back to the 2014/15 DARPA DRC. But we are working hard to do much more than that. Currently to build a human scale robot a person needs to spend more than $20,000, and in some instances much more. This is too much for hobbyists, schools, or charity organizations, like science museums, boy scouts, girl scouts. Our plan, which we are making progress on, is to create a "hinge" joint that can acts a servo that is strong enough for a human scale robot. We are asking for your help because we do not plan to make this design proprietary, and we cannot make sufficient progress with only nights and weekends.

If we are funded we will put all of the design in an open source location. 3D printed parts will be posted to thingiverse. Thanks for considering our project. The Cyclone Muscle Explained. How to hack a servo for continuous rotation - TowerPro MG995. Why would you want or need to modify your perfectly good servo? 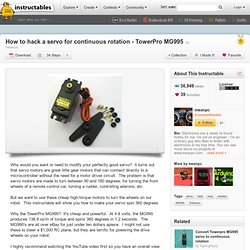 It turns out that servo motors are great little gear motors that can connect directly to a microcontroller without the need for a motor driver circuit. The problem is that servo motors are made to turn between 90 and 180 degrees, for turning the front wheels of a remote control car, turning a rudder, controlling ailerons, etc. Automation. Bionic hand designed and 3D printed in bedroom - This is 3D technology!! Metal Fabrication Material Handling Automation Robots. Many companies in the metal fabrication industry struggle to maintain a workforce big enough to meet their production needs and brave enough to handle the working conditions. 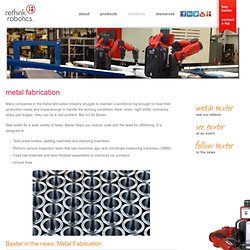 Heat, noise, night shifts, monotony, sharp part edges—they can be a real problem. But not for Baxter. Well suited for a wide variety of tasks, Baxter helps you reduce costs and the need for offshoring. It is designed to: Tend press brakes, welding machines and stamping machinesPerform various inspection tasks that use machines, jigs, and coordinate measuring machines (CMMs)Feed raw materials and semi-finished assemblies to machines via conveyorUnload lines. Universal Gripper from iRobot. Arduino Uno vs BeagleBone vs Raspberry Pi. The Monday Jolt is a new column about microcontrollers and electronics that appears in MAKE every Monday morning. 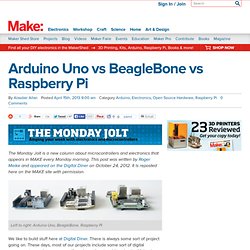 This post was written by Roger Meike and appeared on the Digital Diner on October 24, 2012. It is reposted here on the MAKE site with permission. Left to right: Arduino Uno, BeagleBone, Raspberry Pi We like to build stuff here at Digital Diner. There is always some sort of project going on. There are so many great platforms for creating digitally enabled devices that its gotten hard to figure out which one to use. The three models (all of which we use here at Digital Diner) are the Arduino, Raspberry Pi and BeagleBone. The Arduino Uno is a staple for the maker community. The Raspberry Pi is the newcomer to the game. How-To: Work with Shape-Memory Alloy. We’re very pleased to have Jie Qi on MAKE for our Advanced Materials month (which has been extended until Feb 6). 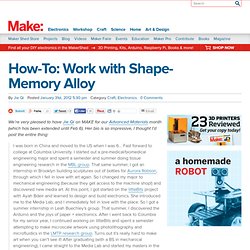 Her bio is so impressive, I thought I’d post the entire thing: I was born in China and moved to the US when I was 6… Fast forward to college at Columbia University. I started out a pre-medical/biomedical engineering major and spent a semester and summer doing tissue engineering research in the MBL group. That same summer, I got an internship in Brooklyn building sculptures out of bottles for Aurora Robson, through which I fell in love with art again. So I changed my major to mechanical engineering (because they get access to the machine shop!) Jie put together this wonderful introduction to shape-memory alloys (SMA) for us. You’ve likely heard about shape-memory alloys (SMAs), metals that change shape when heated to an activation temperature. The most commonly used SMA is nitinol (nickel titanium). Venus fly trap pop-up page: Animated vines: I/O self-folding paper: Jie Qi.