Hillary Clinton Won The First Presidential Debate, Polling Finds. Pete Souza: Capturing unguarded moments with Obama. As a staff photographer, for one and a half terms, his candid shots of "Dutch" and Nancy loosened the stiff collar of office, and brought humanity and intimacy to the administration. 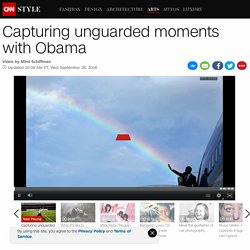 When George H.W. Bush took over, Souza returned to freelancing. Years later he began covering a young senator from Illinois, who would one day assume the highest office in the land. Since that day in January 2009, Souza has barely left President Obama's side. He's toured the world capturing official engagements and private moments. "I don't think there's really anyone else in the White House that has that kind of exposure to him," Souza admits. "From a documentary standpoint, I'm the only person that sees him in all these different roles. " Social media changes the game Whether that's photographing the beloved Bo aboard Air Force One or Jacob Philadelphia, a young African American comparing his hair to Obama's, Souza has been there. And the public have never been far behind. Artificial Mexico Cactus - Commercial Silk Int'l. Artificial Hairbrush Cactus Plants - Commercial Silk Int'l. Artificial Cactus - Giant Sisal Agave - Commercial Silk Intl'l. 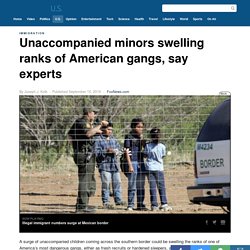 Some 227,149 unaccompanied children have been apprehended at the border over the last six years, according to the U.S. Border Patrol. They remain in federal custody until a sponsor can be located, at which time they are often sent to communities where they are ripe for recruitment by Latin gangs such as the infamous MS-13. “Our safety standards have increased,” Andrea Helling, spokeswoman for the U.S. Department of Health and Human Services, told FoxNews.com.

Federal law requires the Department of Homeland Security transfer children under 18 to the custody of Helling’s agency until they are released to an appropriate sponsor, usually a relative, while their immigration cases are adjudicated. “We’re looking at the possibility,” said Lt. Hillary Clinton 'healthy and fit to serve as president,' doctor says. Hillary Clinton’s doctor on Wednesday pronounced her “healthy and fit” to serve as president, making a belated effort at transparency and hoping to contain political damage after the Democratic nominee was too weak to make it through a Sept. 11 memorial service this weekend. 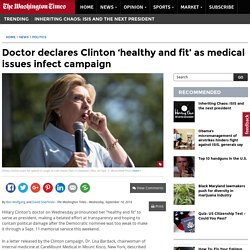 In a letter released by the Clinton campaign, Dr. Lisa Bardack, chairwoman of internal medicine at CareMount Medical in Mount Kisco, New York, described a series of nagging conditions and a handful of medications Mrs. Clinton is taking, but said other than allergies, a sinus infection and her bout with pneumonia, she has no major medical issues. 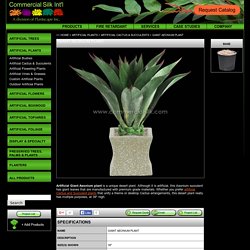 Flowering Fake Fairy Castle Cactus. Artificial Euphorbia Cactus - Commercial Silk Int'l. Artificial Dracaena Dragon Tree - Commercial Silk Int'l. Trump, Clinton rip each other over Iraq War, ISIS at military forum. Donald Trump and Hillary Clinton slammed each other over the Iraq War and the fight against ISIS at a national security forum Wednesday, with the Republican nominee also appearing willing to allow undocumented immigrants wishing to serve in the military to remain in the U.S. 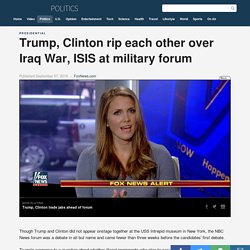 Though Trump and Clinton did not appear onstage together at the USS Intrepid museum in New York, the NBC News forum was a debate in all but name and came fewer than three weeks before the candidates' first debate. Trump's response to a question about whether illegal immigrants who plan to serve in the military can stay in America marked another apparent shift for the Republican nominee, who caused outrage during the GOP primary with his call to deport all illegal immigrants. "I think that when you serve in the armed forces, that's a very special situation, and I could see myself working that out," Trump said. "We need to be careful and vet carefully, but it would be a special circumstance, yes. " Donald Trump, Hillary Clinton declare each other unfit to serve as commander in chief. Seeking to paint themselves as eminently qualified and the other’s judgment as lacking, Donald Trump and Hillary Clinton traded barbs Wednesday night over the Iraq War, the Islamic State, U.S. intervention in Libya and other key foreign policy challenges, each telling a hall full of veterans and servicemen and -women that the other isn’t fit to serve as commander in chief. 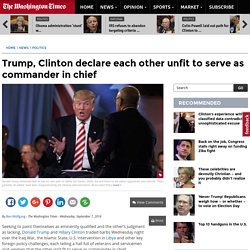 At a forum hosted by NBC News and the Iraq and Afghanistan Veterans of America, the two White House hopefuls each accused the other of fully supporting the 2003 invasion of Iraq, pointing to how the conflict has destabilized the region and led to the rise of the Islamic State. For her part, Mrs. Clinton once again admitted she’d made a mistake with her vote to authorize the conflict, but quickly turned the tables on her Republican foe and highlighted his own muddy position on the war. That record, she said, also included the 2011 military intervention in Libya, a decision Mrs. Artificial Dessert Yucca Tree - Commercial Silk Int'l. Artificial Desert Cactus - Commercial Silk Int'l. Request Catalog Similar Products. 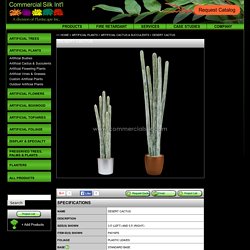 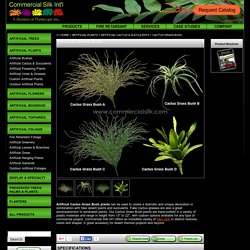 Fake Cactus grasses are also a great accompaniment to windowsill plants. Our Cactus Grass Bush plants are hand-crafted in a variety of plastic materials and range in height from 13" to 22", with custom options available for any type of commercial project. Commercial Silk Int’l offers an incredible variety of fake cacti in distinct textures, colors and shapes. 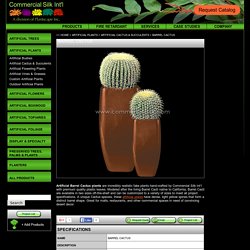 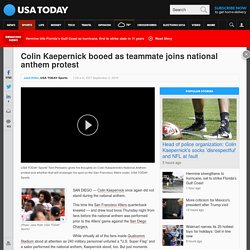 USA TODAY Sports SAN DIEGO — Colin Kaepernick once again did not stand during the national anthem. This time the San Francisco 49ers quarterback kneeled — and drew loud boos Thursday night from fans before the national anthem was performed prior to the 49ers' game against the San Diego Chargers. While virtually all of the fans inside Qualcomm Stadium stood at attention as 240 military personnel unfurled a "U.S.

He has topped Forbes magazine's list of the world's highest paid actors with an estimated payday of $64.5 million. USA TODAY The Rock has dislodged Iron Man from the top of Forbes' highest-paid actor list. Dwayne Johnson, the most successful performer to cross over from pro wrestling, pulled in $64.5 million between June 2015-2016, thanks to his roles in the Fast & Furious franchise and San Andreas. His participation in animated Disney feature Moana, due Nov. 23, will likely help his placing on next year's list. WATCH: A Powerful Poem On How North East Women Are Objectified Everyday. Recently, a North-Eastern woman, Monika Khangembam, alleged that an immigration officer at Delhi airport 'humiliated' her by repeatedly asking questions about her nationality.

"The officer looked at my passport and said you don't look like an Indian," wrote Monika in a Facebook post. Monika is not alone. Yesterday, a Reddit thread pointed out how people from North East are treated elsewhere in the country. Artificial ZZ Plant - Commercial Silk Int'l. Artificial Sumac Plant - Commercial Silk Int'l. Artificial Sumac Plant (also pronounced Sumach) is manufactured with our fire retardant silk foliage. The Sumac plant is designed after the living shrub that turns a fiery red in the fall season. Our artificial plant can be manufactured in green or can be painted red for a burst of color. Our artificial Sumac has been specified in wilderness themes and pairs well with Aspen trees and Mugho Pine plants.

Our design team can help you design your interior theme landscape project. Artificial Sequoia Plant 18" Artificial Selloum Plant - Commercial Silk Int'l. Donald Trump claims sarcasm, but damage on hack comments lingers. But he's finding out that presidents -- and by extension, presidential nominees -- don't get that luxury when the topic is national security. The GOP nominee tried to dampen controversy over his apparent call Wednesday for Russia to either stage an espionage cyber hack to find Clinton's deleted emails or to publish information it had already stolen.

"Of course I'm being sarcastic," Trump said in a Fox News interview that aired the day after his comments at a news conference in Florida sparked a national furor and offered ammunition for Democrats who claim he's not fit to be president. The affair is a lesson for Trump in how every word a potential commander in chief utters is parsed and amplified, and can have significant political and diplomatic consequences.

US presidents in the modern era have seen singular sentences and offhand comments define global perceptions on US policies and leadership. On Thursday, Senate Minority Leader Harry Reid called for Trump to get "fake briefings. " Takeaways: Clinton skates through her program and sticks her landing. Play Video Play Fullscreen Stronger together: Day 4 highlights from the convention Hillary Clinton accepting her presidential nomination and her daughter Chelsea introducing her mom with loving memories are just a few of the memorable moments from the final night of the Democratic National Convention. Artificial Sea Grape Plant (Green)- Commercial Silk Int'l. Artificial Sea Grape Plant - Commercial Silk Int'l.

Artificial Peace Lily Plant. Artificial Topiary Olive Hedge - Black Olive - Commercial Silk. Outdoor Privacy Screen - Azalea Screen - Commercial Silk Int'l. Outdoor Artificial Azalea Screen by Commercial Silk Int'l is manufactured to create outdoor privacy screening for living walls, visual screens, or to conceal unsightly objects. Our plant screen can be mounted on the wall or on the ceiling, and can be crafted with several foliage varieties, also see our boxwood screening plant and our ivy screen plants. Our artificial screen plants are manufactured to withstand all hot and cold weather conditions because they are made with UV (Ultraviolet) artificial foliage, which is created through a process by which ultraviolet blocking chemicals are impregnated into the materials during the manufacturing process. These chemicals are blended with the fabric as well as the plastic or PVC parts. Our outdoor foliages have been tested for colorfastness according to ASTM G 155-05, and after one year of UV exposure equivalent to Miami, Florida, our product had NO COLOR LOSS visible by sight.

Artificial Live Oak bush is a multi stem plant that is built on. 7 Truths For Families Trying To Make It Out The Door In The Morn. 3 castaways rescued after spelling 'help' with palm leaves on re. Our artificial Pine spreader plants are built on real wood stems. Our Limber Pine Collection is great for creating memorable theme. Our artificial large leaf boxwood foliage is suitable for indoor. Artificial Large Leaf Boxwood Plant (Exterior) Artificial Janet Craig plant is designed to be a replica of the. Artificial Janet Craig leaves are vivid and broad textured. Hosta fire retardant foliage has vibrant green leaves with a var. Silk Hosta Moonglow fire retardant foliage. Hibiscus Plant is an ideal plant for tropical landscapes.