UNFCCC COP 21 Paris France - 2015 Paris Climate Conference. ‘’The cooperation of over 190 countries in securing many positive outcomes owes much to the patience and persistence of the COP President—Manuel Pulgar-Vidal—and the spirit of Lima as we look forward to Paris—the city of lights and the city of love for our shared future and shared environment’’Christiana Figueres, Executive Secretary of the UN Framework on Climate Change (UNFCCC) COP - What’s it all about? 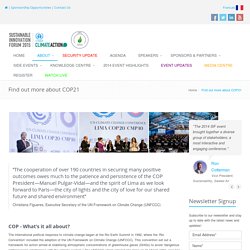 The international political response to climate change began at the Rio Earth Summit in 1992, where the ‘Rio Convention’ included the adoption of the UN Framework on Climate Change (UNFCCC). This convention set out a framework for action aimed at stabilising atmospheric concentrations of greenhouse gases (GHGs) to avoid “dangerous anthropogenic interference with the climate system.” The UNFCCC which entered into force on 21 March 1994, now has a near-universal membership of 195 parties. To visit the official COP21 website for more information, click here. Watch official COP21 video. Tools for action. Tools for action. COP21: Paris conference could be climate turning point, says Obama. US President Barack Obama has said the UN climate conference in Paris could be a "turning point" in global efforts to limit future temperature rises. 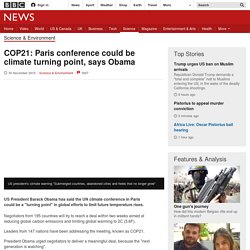 Negotiators from 195 countries will try to reach a deal within two weeks aimed at reducing global carbon emissions and limiting global warming to 2C (3.6F). Leaders from 147 nations have been addressing the meeting, known as COP21. President Obama urged negotiators to deliver a meaningful deal, because the "next generation is watching". He told delegates: "Climate change could define the contours of this century more than any other (challenge). "I came here personally to say the United States not only recognises the problem but is committed to do something about it. " Image copyright UNFCCC He added that recent years had shown that the global economy had grown while emissions had remained flat, breaking the old arguments for inaction "that economic growth and environmental protection were in conflict". There are certainly positive omens.

COP21: 'Never have the stakes been so high' "A political moment like this may not come again," U.N. 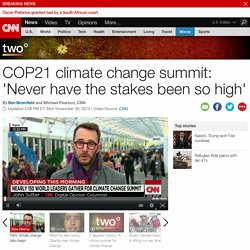 Secretary-General Ban Ki-moon told leaders gathered for the conference. "We have never faced such a test. But neither have we encountered such great opportunity. " The talks began with a moment of silence for victims of the November 13 terror attacks in Paris, and the tragedy served as a touchstone for world leaders urging unity and action. "What greater rejection of those who would tear down our world than marshaling our best efforts to save it," President Barack Obama said in his speech. French President Francois Hollande noted that "never have the stakes been so high because this is about the future of the planet, the future of life.

" "And yet two weeks ago, here in Paris itself, a group of fanatics was sowing the seeds of death in the streets," he said. Legally binding agreement Leaders of 150 nations, along with 40,000 delegates from 195 countries, are attending the conference, called COP21. Acted. 1. 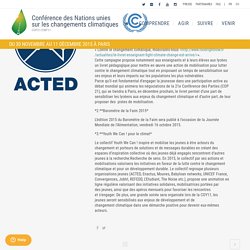 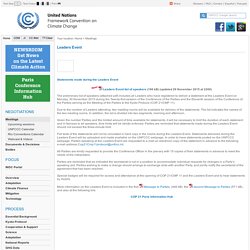