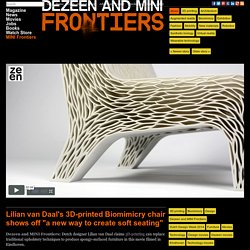 Van Daal is investigating alternative production methods for upholstered furniture, which is usually very resource-intensive to make. "Soft seating usually consists of several different materials [and] it's all glued together, which is a problem for the recyclability of a product," she explains in the movie. "You need five or six different factories [to produce conventional upholstered furniture]. But with 3D printing you can produce very locally and you don't have material waste in the production process; you only use the material you need. " Van Daal was able to create these varying zones of stiffness by imitating plant cell structures in the natural world. "I have to develop it further," she says. 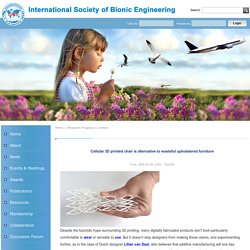 But it doesn't stop designers from making those claims, and experimenting further, as in the case of Dutch designer Lilian van Daal, who believes that additive manufacturing will one day replace the resource-intensive process behind traditional, upholstered furniture with one that is streamlined and resource-efficient. Today's upholstered furniture is a pain to recycle, being an amalgamation of glues, springs, chemicals, foams and fabrics. 3D printing would help to solve this issue, says the graduate of The Hague's Royal Academy of Art over at Dezeen: Gt2P develops furniture construction systems using digital crafting and traditional techniques. 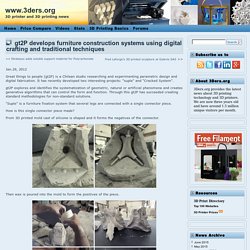 It has recently developed two interesting projects: "suple" and "Cracked System". gt2P explores and identifies the systematization of geometric, natural or artificial phenomena and creates generative algorithms that can control the form and function. Multithread: 3D printed furniture illustrating the forces at work. How 3D printing has led to a revolution in furniture design. Modular Furniture System with 3D Printed Connectors – LINK. Minale-Maeda's 3D Printed Connector Can be Downloaded to Make DIY Furniture. Italian-Japanese Studio Minale-Maeda has come up with a little clever design that allows people anywhere in the world to make their own furniture. 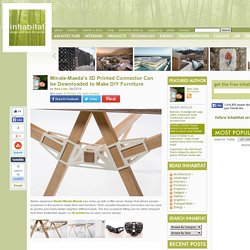 Their versatile Keystone connectors can be used to quickly and easily fasten together different parts. The tiny sculptural fitting can be either shipped from their Rotterdam studio, or 3D printed as an open source design. Massive BigRep One 3D Printer Can Create Life-Size Furniture. By now you’ve probably seen desktop 3D Printers capable of churning out knick-knacks and tchotchkes – but the new BigRep One 3D printer is capable of printing life-size furniture! 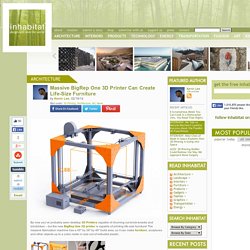 The massive fabrication machine has a 45″ by 39″ by 46″ build area, so it can make furniture, sculptures and other objects up to a cubic meter in size out of extruded plastic. Inspired by the RepRap Project, BigRep decided to create a blown-up version of the printer fit for the realms of industry and art. BigRep’s founders Marcel Tasler and Lukas Oehmigen come from an art background, and they wanted to develop a printer big enough to create 1:1 scale prototypes.

In addition, the BigRep One can fabricate retail-ready products and designer furniture like the stool you see above. The BigRep printer comes with two extruding heads, and it can create objects with nine different filaments including Laywood and Laybrick, which allow you to print out wooden and sandstone objects. A 3-D Printer For Every Home! (Yeah, Right) There are a few Holy Grails on the Internet--things that thou shalt not touch because the Internet is still pretty much run by geeks. 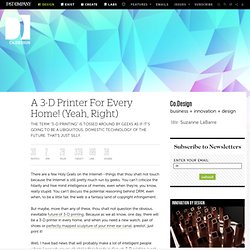 You can’t criticize the hilarity and hive mind intelligence of memes, even when they’re, you know, really stupid. You can’t discuss the potential reasoning behind DRM, even when, to be a little fair, the web is a fantasy land of copyright infringement. But maybe, more than any of these, thou shalt not question the obvious, inevitable future of 3-D printing. Because as we all know, one day, there will be a 3-D printer in every home, and when you need a new watch, pair of shoes or perfectly mapped sculpture of your inner ear canal, presto!

, just print it! Well, I have bad news that will probably make a lot of intelligent people whom I respect very much shake their heads in disgust. 3-D printing is not “bigger than the Internet” or even as big as the Internet. 3-D printing is not the next home revolution. For One, We Just Don’t Need That Much Crap. MakerBot Unveils Next-Gen 3D Printer, And First Retail Store. Yesterday in downtown Brooklyn, MakerBot unveiled the second generation of its popular desktop 3-D printer: the Replicator 2. 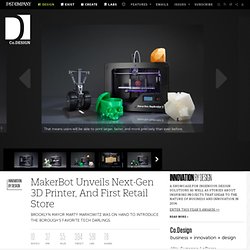 Speaking in a bistro next to the MakerBot offices, CEO Bre Pettis was charmingly excited to rip away the black fabric covering the revamped machine. “First of all, it’s just a beautiful desktop 3-D printer,” he said. The Replicator 2 is poised to make desktop 3-D printing a far more ubiquitous technology. The new model is 37% bigger than MakerBot’s original, and prints with a far greater accuracy--100 microns per inch, to be exact (one micron is about as thick as a piece of paper). That means users will be able to print larger, faster, and more precisely than ever before. For more advanced users, MakerBot will introduce a dual-extrusion version called the Replicator 2X next year.

Pettis also unveiled a new software, MakerWare, which is arguably more important than the Replicator 2. The World’s First 3D Printing Pen that Lets you Draw Sculptures. Forget those pesky 3D printers that require software and the knowledge of 3D modeling and behold the 3Doodler, the world’s first pen that draws in three dimensions in real time. 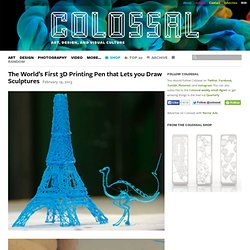 Imagine holding a pen and waving it through the air, only the line your pen creates stays frozen, suspended and permanent in 3D space. Sound like magic? Well it certainly looks like it, watch the video above to see the thing in action. The 3Doodler was designed by Boston-based company WobbleWorks who recently launched a Kickstarter campaign to sell the miraculous little devices that utilizes a special plastic which is heated and instantly cooled to form solid structures as you draw.

I don’t know about you but for me this might have just won the most impulsive Kickstarter purchase in history.