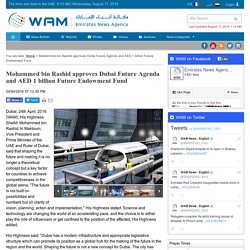 "The future is not built on possibilities and numbers but on clarity of vision, planning, action and implementation," His Highness stated. Science and technology are changing the world at an accelerating pace, and the choice is to either play the role of influencers or get confined to the position of the affected, His Highness added. El príncipe heredero de Dubái lanza el programa Dubai Future Accelerators para atender siete. 7 Goals of the Dubai Future Accelerator Program. Dubai is ramping up to make the rest of the world’s tech accelerators look meek. 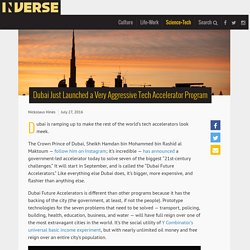 The Crown Prince of Dubai, Sheikh Hamdan bin Mohammed bin Rashid al Maktoum — follow him on Instagram; it’s incredible — has announced a government-led accelerator today to solve seven of the biggest “21st-century challenges.” It will start in September, and is called the “Dubai Future Accelerators.” Like everything else Dubai does, it’s bigger, more expensive, and flashier than anything else. Dubai Future Accelerators is different than other programs because it has the backing of the city (the government, at least, if not the people). Dubai construyó la primera oficina del mundo con una impresora 3D. The World in 2050. SU Global Summit. Dubai launches Museum of the Future. Museum of the Future - See the future, create the future.

Dubai Museum of Future Innovation & UAE Mars Mission. Construction of world's first 3D printed metal bridge begins today in Red Light District of Amsterdam. Oct 16, 2015 | By Kira Amsterdam is a world-renowned capital city, as famous for its 17th century architecture and ubiquitous fairy-tale canals as it is for its progressive culture and technology-driven research institutes. 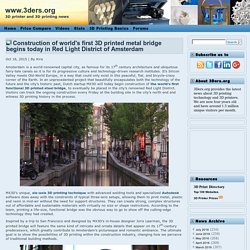 It's Silicon Valley meets Old-World Europe, in a way that could only exist in this peaceful, flat, and bicycle-crazy corner of the Earth. In an unprecedented project that beautifully encapsulates both the technology of the future and the city’s historic past, Dutch startup MX3D will today begin construction of the world’s first functional 3D printed steel bridge, to eventually be placed in the city’s renowned Red Light District. A robot is planning to 3D print a steel bridge in Amsterdam. While 3D printing has endless possibilities, we have yet to see many applications in everyday use. 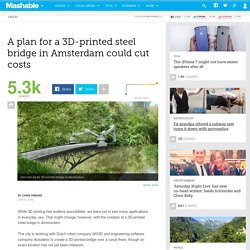 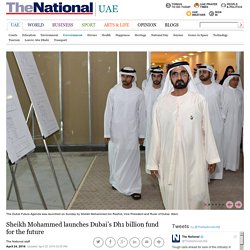 Sheikh Mohammed also approved the establishment of the Future Endowment Fund, worth Dh1 billion, to invest in innovation. And he approved the Future Cities programme as a framework for strategies and research projects to shape the future of Dubai and the UAE and create a global model in the field of future cities with components such as energy, transportation and infrastructure. The agenda is a roadmap for the Dubai Future Foundation and will focus on supporting and developing individuals, organisations and the public and private sectors. UAE aims to be world hub for technology. DUBAI // The UAE on Wednesday launched the latest component of its strategy to become an ideas hothouse and a world-leading hub for technology. 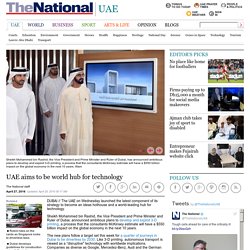 Sheikh Mohammed bin Rashid, the Vice President and Prime Minister and Ruler of Dubai, announced ambitious plans to develop and exploit 3-D printing, a process that the consultants McKinsey estimate will have a $550 billion impact on the global economy in the next 10 years. The new plans follow a target set this week for a quarter of journeys in Dubai to be driverless by 2030. Museum of the Future 2016. Construction of World's 1st 3D Printed Bridge Begins - 3D Printing Industry. In Amsterdam, today, Dutch 3D printing firm MX3D cut the ribbon on its project to 3D print a steel bridge across one of the city’s famous canals using two modified, multi-axis robotic arms. 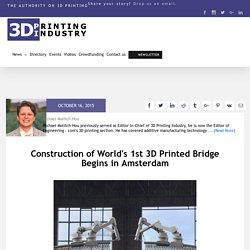 And the way that it cut that ribbon was quite befitting. One more time! The final moment of revealing the location of #mx3dbridge: Oudezijds Achterburgwal pic.twitter.com/orjzYOvv88— MX3D Bridge (@MX3D_Bridge) October 16, 2015. Ciudad Creativa Digital. Fondodelfuturo.gob.