12 Best Libraries in the US and Why You Should Visit. Libraries are a precious resource. 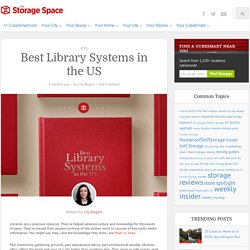 They've helped advance culture and knowledge for thousands of years. They've moved from ancient archives of the written word to sources of free multi-media information. You might say they—and the knowledge they hold—are Made to Keep. Part community gathering grounds, part educational mecca, part architectural wonder, libraries often reflect the heart and soul of a city better than anything else. They serve as safe spaces, lead conversations on human rights, provide thoughtful assistance, organize learning events, and give access to digital resources. We've chosen to explore some of the best libraries in the U.S. that not only do all of the above but go beyond. 1.

With San Diego Central Library at the core, this system of libraries serves the many neighborhoods of the sprawling city, with 36 branches. Other notable San Diego librariesThe San Diego State University Library is architecturally stunning and has an impressive collection and resource center. Coding App for Kids. Coding App for Kids. Organize your resources in an online digital binder - LiveBinders. On building learning playlists. We create them on Spotify and YouTube and iTunes. 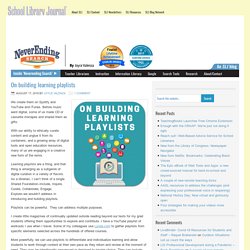 Before music went digital, some of us made CD or cassette mixtapes and shared them as gifts. With our ability to ethically curate content and unglue it from its containers, and a growing array of digital tools and open education resources, many of us are engaging in a creative new form of the remix. Learning playlists are a thing, and that thing is emerging as a subgenre of digital curation in a variety of flavors.

As a librarian, I can’t think of a single Shared Foundation–Include, Inquire, Curate, Collaborate, Engage, Explore–we wouldn’t address in introducing and building playlists. Playlists can be powerful. I create little magazines of continually updated outside reading beyond our texts for my grad students offering them opportunities to explore and contribute. Let’s explore a few playlist possibilities. Differentiation: Imagine creating instruction (face-to-face or flipped) using Google Docs or Slides as your major platform. Curation and the School Librarian.

It’s one of AASL’s Shared Foundations in the new National Standards. 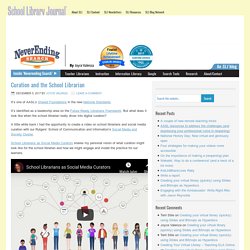 It’s identified as a leadership area on the Future Ready Librarians Framework. But what does it look like when the school librarian really dives into digital curation? A little while back I had the opportunity to create a video on school librarians and social media curation with our Rutgers’ School of Communication and Information’s Social Media and Society Cluster. School Librarians as Social Media Curators shares my personal vision of what curation might look like for the school librarian and how we might engage and model the practice for our learners.

You may also be interested in: A revised manifesto. Thank you all for the kind feedback you offered for my rant a few days back. 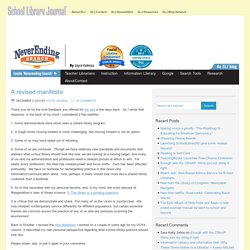 As I wrote that response, in the back of my mind I considered a few realities: 1. Some administrators have never seen a vibrant library program. 2. In tough times moving forward is more challenging. 3. 4. 5. It is critical that we demonstrate and share. Back in October, I revised the little Manifesto I worked on a couple of years ago for my VOYA column. Please share, add, or pull it apart in your comments. Manifesto for 21st Century School Librarians My prompt: A couple of summers back a young school librarian, fresh out of library school, asked a very honest question at one of our state retreats: We’re all doing different stuff.

Well into the 21st century, it is clear that the concept of modern teacher librarian practice is not clear. What Does It Mean to Be "Political"? By Russell JohnsonLeading up to Lady Gaga’s Super Bowl performance, countless bloggers wondered about whether or not she would “go political,” and whether or not she should. 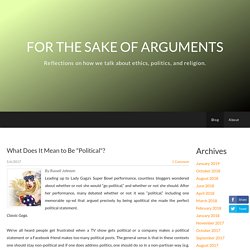 After her performance, many debated whether or not it was “political,” including one memorable op-ed that argued precisely by being apolitical she made the perfect political statement.Classic Gaga.We’ve all heard people get frustrated when a TV show gets political or a company makes a political statement or a Facebook friend makes too many political posts. The general sense is that in these contexts one should stay non-political and if one does address politics, one should do so in a non-partisan way (e.g. saying “make your voice heard, get out and vote” is fine, but telling people how they should vote isn't). The obvious sense of “political” in these contexts is “making reference to a topic that is currently disputed by politicians or a bone of contention between the right and left.”