Simple Sourdough Toasting or Sandwich Bread. As I mentioned a few weeks, a number of requests about how to make my mother’s peasant bread with a sourdough starter encouraged me to dip my toe into the wonderful world of naturally leavened breads. 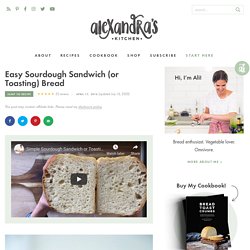 You can read more about that experiment here, which led to this simple sourdough focaccia recipe, an adaptation of my favorite yeasted, refrigerator focaccia. It also led to this sourdough toasting bread, which is essentially the same formula, just baked in a different vessel and without the slick of oil and sprinkling of sea salt on top. I’ve been making this bread even more often than the focaccia these days because I love the shape: it’s so nice for morning toast and for sandwiches. PS: Essential Equipment For Sourdough Bread Baking PPS: How to Activate, Feed, and Maintain A Sourdough Starter A sourdough starter. That’s it! As always, when mixing sourdough doughs, it’s best to weigh everything with a digital scale. Add 10 g kosher (or other) salt. Add 430 g water. Stir to combine. Print. Simple Sourdough Focaccia Bread Recipe. This post may contain affiliate links. 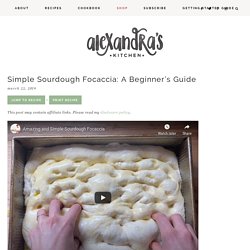 Please read my disclosure policy. Sourdough is having a moment. Longtime sourdough bakers may cringe at this proclamation, just as our grandparents likely roll over in their graves when they hear “toast” is a thing. But it’s true. I cannot open a magazine without seeing a feature on a bakery and its naturally leavened loaves; I cannot scroll through instagram without seeing a crumb shot of a halved sourdough miche, a beautiful web of irregular holes, or an intricately scored, thick-crusted boule being presented like Simba to the animal kingdom.

My interest in sourdough in recent months has been spurred by a number of requests about how to make my mother’s peasant bread with a sourdough starter. But achieving that sour taste — even a subtle sour taste — is something yeast, even with a long slow rise cannot achieve. So I began experimenting. I also think focaccia is an ideal bread with which to begin a sourdough journey. Sourdough Bagel. Top five iced coffees from around the world. Iced coffee has been a popular drink in Africa and Asia for centuries, but it’s only really made it big in the West over the last few years, initially made popular by a couple of American coffee giants and the explosion of London’s coffee scene. 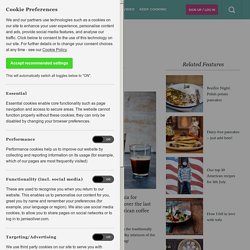 The recipes we’ve got here cover the whole spectrum, all the way from the traditionally brewed drinks of North Africa and Vietnam right up to the sugary, milky mixtures of the modern-day caffeine junkie – so load up those ice-trays and get brewing! 1. Mazagran Known worldwide as the original iced coffee, the Mazagran was brought back from North Africa to France in the 19th Century. It quickly became popular in the coffee houses of Paris, and was the first European coffee to be served in tall, narrow glasses.

Simply brew your espresso nice and strong and serve over ice with a glass of lemon-spiked ice-cold water. Ingredients 2 shots of strong, hot espressoice cubes½ a lemon1 glass of ice-cold water 2. 3. Cold brew is everywhere. 4. The Best Sourdough Sandwich Bread, yeast-free. First let me clarify that when I say this sourdough sandwich bread is yeast-free, I mean it’s free of any added yeast. 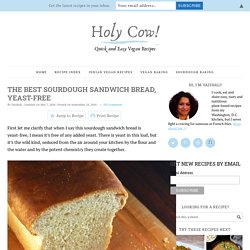 There is yeast in this loaf, but it’s the wild kind, seduced from the air around your kitchen by the flour and the water and by the potent chemistry they create together. Pin it This is the most perfect sandwich bread I’ve ever baked, and yes, it’s mostly white flour, but I don’t feel like the devil about it. Research shows that the healthiness of white sourdough bread far exceeds that of wholegrain and multigrain breads. That’s because sourdough has a powerful effect on blood sugar: when left to work its fermenting magic, it breaks down the starches in the foods it’s added to, making them easier to digest. Many sourdough breads need to be started a day before, but this one can easily be made in about eight hours from start to finish, including three rise times. I am in love with my starter. Any suggestions?