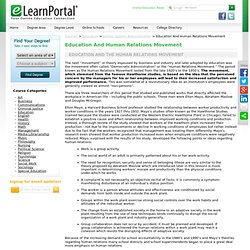 The period known as the Human Relations Movement lasted from the late 1920’s to the 1950’s. The movement, which stemmed from the famous Hawthorne studies, is based on the idea that the perceived concern by the managers for his or her employees will lead to their increased satisfaction and improved performance. This was somewhat of a revolutionary idea as an institution’s employees were generally viewed as almost “non-persons”. There are three researchers of this period that studied and published works that directly affected the workplace in American life – including the public schools. Elton Mayo, a Harvard Business School professor studied the relationship between worker productivity and worker conditions in the years 1927 thru 1932. Work is a group activity. International management. International management is the management of business operations in an organisation serving markets and operating in more than one country. 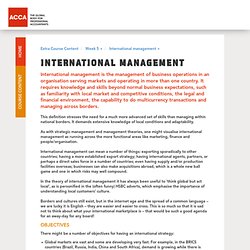 It requires knowledge and skills beyond normal business expectations, such as familiarity with local market and competitive conditions, the legal and financial environment, the capability to do multicurrency transactions and managing across borders. This definition stresses the need for a much more advanced set of skills than managing within national borders. It demands extensive knowledge of local conditions and adaptability. As with strategic management and management theories, one might visualise international management as running across the more functional areas like marketing, finance and people/organisation. In the theory of international management it has always been useful to ‘think global but act local’, as is personified in the (often funny) HSBC adverts, which emphasise the importance of understanding local customers’ culture.

Objectives. Leadership style. Podcast: Theories of leadership. Routes to the top. The traditional career path is no longer enough. 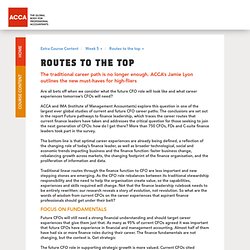 ACCA’s Jamie Lyon outlines the new must-haves for high-fliers Are all bets off when we consider what the future CFO role will look like and what career experiences tomorrow’s CFOs will need? ACCA and IMA (Institute of Management Accountants) explore this question in one of the largest ever global studies of current and future CFO career paths. The conclusions are set out in the report Future pathways to finance leadership, which traces the career routes that current finance leaders have taken and addresses the critical question for those seeking to join the next generation of CFOs: how do I get there?

More than 750 CFOs, FDs and C-suite finance leaders took part in the survey. Traditional linear routes through the finance function to CFO are less important and new stepping stones are emerging. Focus on fundamentals Future CFOs will still need a strong financial understanding and should target career experiences that give them just that. The importance of teams. We are often told that teams are the way forward, especially in business. 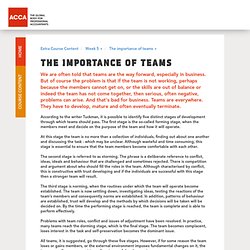 But of course the problem is that if the team is not working, perhaps because the members cannot get on, or the skills are out of balance or indeed the team has not come together, then serious, often negative, problems can arise. And that's bad for business. Teams are everywhere. They have to develop, mature and often eventually terminate. According to the writer Tuckman, it is possible to identify five distinct stages of development through which teams should pass.

Strategy and people. A discussion of the challenges of people when considering business strategy An organisation’s resources. will probably contribute to most of the weaknesses and strengths in a SWOT analysis. 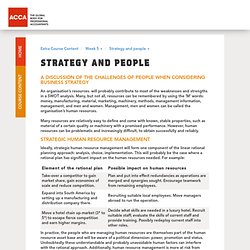 Many, but not all, resources can be remembered by using the ‘M’ words: money, manufacturing, material, marketing, machinery, methods, management information, management, and men and women. Management, men and women can be called the organisation’s human resources. Many resources are relatively easy to define and come with known, stable properties, such as material of a certain quality or machinery with a promised performance.

Podcast: Strategy and people. Five ways to improve diversity in the workplace. 1. 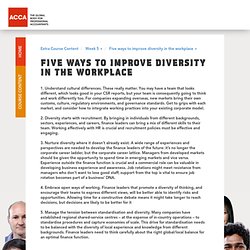 Understand cultural differences. These really matter. You may have a team that looks different, which looks good in your CSR reports, but your team is consequently going to think and work differently too. For companies expanding overseas, new markets bring their own customs, culture, regulatory environments, and governance standards. Get to grips with each market, and consider how to integrate working practices into your existing corporate model. 2. 3. 4. Equal opportunities and managing diversity. Organisations and businesses are made up of many individuals working together to achieve organisational success. 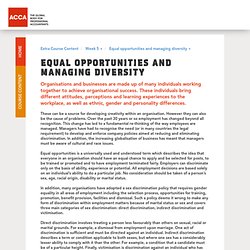 These individuals bring different attitudes, perceptions and learning experiences to the workplace, as well as ethnic, gender and personality differences. These can be a source for developing creativity within an organisation. However they can also be the cause of problems. Over the past 30 years or so employment has changed beyond all recognition. This change has led to a fundamental re-thinking of the way employees are managed. Equal opportunities is a universally used and understood term which describes the idea that everyone in an organisation should have an equal chance to apply and be selected for posts, to be trained or promoted and to have employment terminated fairly.

Direct discrimination involves treating a person less favourably than others on sexual, racial or marital grounds.