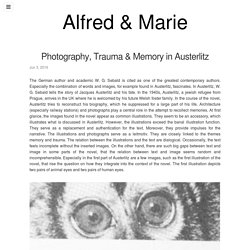 G. Sebald is cited as one of the greatest contemporary authors. Especially the combination of words and images, for example found in Austerlitz, fascinates. In Austerlitz, W. G. First, it seems to be enigmatic what those eyes might represent. In the attempt to visualize the past, images play a key role. The separation of refugee children from their families and their life in a foreign country weren’t traditionally classified as traumatic, but as a rescue.

Austerlitz enthusiasm for architecture seems to be a replacement and a suppressing mechanism. According to Freud, the hysterical state of mind is dominated by unconscious ideas. In Prague, the place of his childhood, his former nanny confronts Austerlitz with a photograph depicting two unidentified people, a woman and a man, on a theatre stage. After discovering that his mother had been interned in Terezín, Austerlitz begins to search a photograph that depicts his mother. Literature Baer, Ulrich (Hg.) Rag-picking history. Cast-iron capital, Skipton station, Yorkshire, 1880 ‘All I remember of Pilsen, where we stopped for some time, said Austerlitz, is that I went out on the platform to photograph the capital of a cast-iron column which had touched some chord of recognition in me. 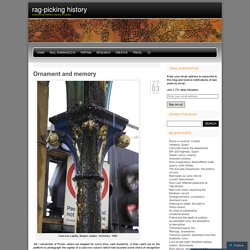 What made me uneasy … was the idea that this cast-iron column, which with its scaly surface seemed almost to approach the nature of a living being, might remember me and was, if I may so put it, said Austerlitz, a witness to what I could no longer recollect for myself.’ For Austerlitz, the eponymous narrator of W. G. Sebald’s 2001 novel, the repressed memories of his traumatic childhood in Nazi Germany keep resurfacing in unexpected and disturbing contexts. Liverpool Street Station, London, 1875 Paddington Station, London, 1852-55 York Station, 1877 It’s precisely this function of ornament that infuses Sebald’s Austerlitz with its narrative potency. Preston station, 1880 Hellifield station, Yorkshire, 1880 Like this: Like Loading... Postcard from Sebald. 2011 : William Jennings. Sebald and the Narration of Trauma. Walking, Researching, Remembering: W. G. Sebald’s The Rings of Saturn as Essay — Patrick Madden » Numéro Cinq. W. 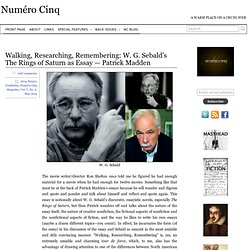 G. Sebald The movie writer/director Ron Shelton once told me he figured he had enough material for a movie when he had enough for twelve movies. Something like that must be at the back of Patrick Madden’s essays because he will wander and digress and quote and ponder and talk about himself and reflect and quote again. This essay is notionally about W. Dg In his book Understanding W. Looking and Looking Away: Sebald Programs on BBC Radio 3 « Vertigo. Crystal Radio Set Made from Quaker Oats Box BBC’s Radio 3 has scheduled a series of five programs leading up to the tenth anniversary of W.G. 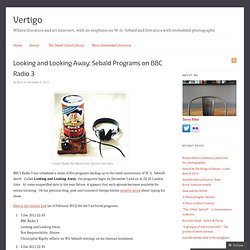 Sebald’s death. Obituary: WG Sebald. 'I don't think one can write from a compromised moral position," remarked the German writer WG Sebald, who has died, aged 57, in a car crash in East Anglia. 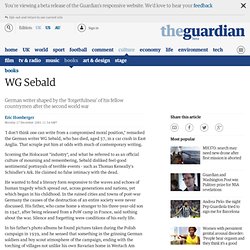 That scruple put him at odds with much of contemporary writing. Scorning the Holocaust "industry", and what he referred to as an official culture of mourning and remembering, Sebald disliked feel-good sentimental portrayals of terrible events - such as Thomas Keneally's Schindler's Ark. He claimed no false intimacy with the dead. He wanted to find a literary form responsive to the waves and echoes of human tragedy which spread out, across generations and nations, yet which began in his childhood.

In the ruined cities and towns of post-war Germany the causes of the destruction of an entire society were never discussed. Sebald doubted whether those who had never experienced Theresienstadt or Auschwitz could simply describe what occurred there. The narrative voice in his books is an inventive one, richly delineated.