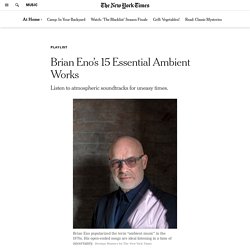 That’s what Covid-19 has brought to many people — and it’s a mental state that Brian Eno’s vast recorded catalog has been prepared for since he first popularized the term “ambient music” in the 1970s. The long days and featureless nights of self-quarantine offer an opportune moment to revisit — or get acquainted with — Eno’s time-warping music. He does have other skills. On four solo albums from the 1970s, after he left Roxy Music, Eno thoroughly mastered rock-song structure, with slyly cerebral lyrics and skewed instrumental sounds; all four albums are gems, particularly “Before and After Science” from 1977.

He has intermittently made song albums in the decades since.

Arts: Composer Nigel Osborne. In the late-1960s, when Nigel Osborne was studying composition in Warsaw, a Polish friend took him on a trip to Belzec, in the south-eastern Lublin district. 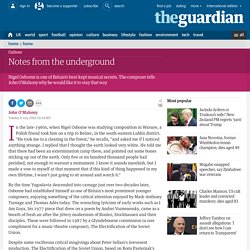 "He took me to a clearing in the forest," he recalls, "and asked me if I noticed anything strange. I replied that I thought the earth looked very white. He told me that there had been an extermination camp there, and pointed out some bones sticking up out of the earth. Only five or six hundred thousand people had perished, not enough to warrant a monument. 10 Greatest Bob Dylan Songs. Blonde On Blonde, 1966 "Visions of Johanna" is a tour de force, a breakthrough not only for the writer but for the very possibilities of songwriting. 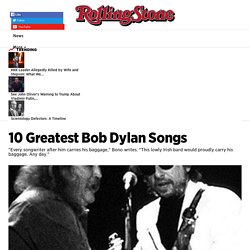 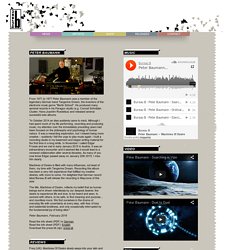 He produced many seminal records in his Paragon studio (e.g. Conrad Schnitzler, Cluster, Hans-Joachim Roedelius) and released several successful solo albums. "In October 2014 an idea suddenly came to mind. Although I had spent much of my life performing, recording and producing music, my attention over the immediately preceding years had been focused on the philosophy and psychology of human nature.

We've been thinking about Bowie a lot here lately, but there's one thing I discovered during all of the recent tributes that I still want to share: how Tony Visconti recorded Robert Fripp's famous guitar part on "Heroes. 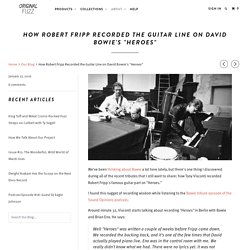 " I found this nugget of recording wisdom while listening to the Bowie tribute episode of the Sound Opinions podcast. Around minute 32, Visconti starts talking about recording "Heroes" in Berlin with Bowie and Brian Eno. He says: Well "Heroes" was written a couple of weeks before Fripp came down. We recorded the backing track, and it's one of the few times that David actually played piano live. Update: Tape Op magazine shared this article on their Facebook page where Nik Far added this video of Tony Visconti discussing the recording process for "Heroes. 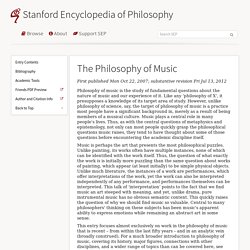 What Is Music? 1.1 Beyond ‘Pure’ Music In most of this entry, the discussion focuses on ‘pure’ or ‘absolute’ music – instrumental music that has no accompanying non-musical components. Most of the philosophers whose work is discussed below also put the focus here, and there are three reasons to do so. The first is that pure music often presents the most difficult philosophical problems. Given the global prevalence of rock music, broadly construed, it is plausible that song is the most common kind of music listened to in the contemporary world. 1.2 The Definition of ‘Music’ Explications of the concept of music usually begin with the idea that music is organized sound. The main problem with the first kind of condition is that every sound seems capable of being included in a musical performance, and thus characterizing the essentially musical features of sounds seems hopeless.

Plato, Music and Misquotes. I spent a pleasant morning, Saturday, browsing through the works of Plato, hunting for the source of a quotation I saw on Facebook, today.* I did several textual searches for words, phrases and quotes on sites that offer his collected works, along with other works by classical authors. 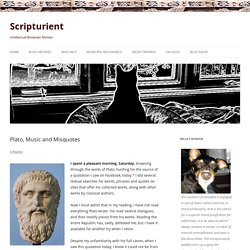 Now I must admit that in my reading, I have not read everything Plato wrote. 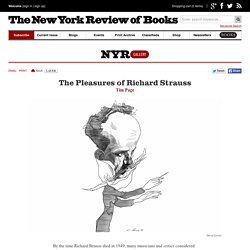 Born in 1864 while Berlioz and Rossini still lived—and a dozen years before Johannes Brahms had written any of his own symphonies—Strauss composed steadily for some sixty-five years and passed away a few months after the premieres of Elliott Carter’s Cello Sonata and John Cage’s Sonatas and Interludes for Prepared Piano. Modernism in Music. Modernism in Music Four Characteristics 1. 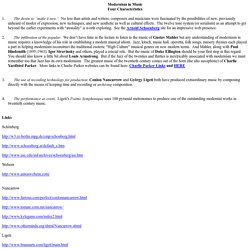