Aziz Ansari on the Music of "Master of None": Father John Misty, Aphex Twin, Arthur Russell, and More. The first and only time we hear the titular Beach House song in the first season of Aziz Ansari's new Netflix series, Master of None, is when Ansari's character, Dev, has been rejected by a woman at the end of a long and seemingly romantic night. 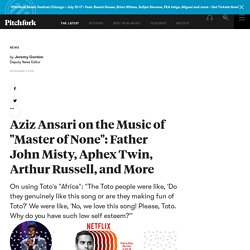 The show, which follows Dev, an aspiring actor who lives a New York life split between success and aimlessness, might have easily taken too much inspiration from the melancholy track, which includes the lines "Cry all the time, cause I'm not having fun. " But Ansari's energy is indefatigable, and the show is accordingly humorous. It's not quite RAAAAAAAANDY! In a Standout Final Season Episode, ‘Parks and Rec’ Became ‘The Johnny Karate Show’ ‘Structurally Sound’ is a recurring feature where each week a different structurally unusual, rule-breaking anomaly of an episode from a comedy series is examined. 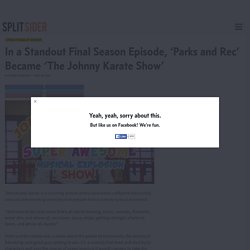 “Welcome to the only show that’s all about learning, music, animals, fireworks, water skis, and above all, ice cream, pizza, ninjas, getting stronger, sharks vs. bears, and above all, karate!” Parks and Recreation was a show about the power of community, the beauty of friendship, and good guys getting to win. It’s a comedy that lived and died by its characters and over the course of seven seasons it would manage to take the inhabitants of Pawnee to some incredible places. Find the Invisible Cow. Le Trône des Frogz - Tous les épisodes ! - A Video PlayList on Dailymotion. 40 Less-Iconic 'SNL' Sketches That We Love Anyway. With Saturday Night Live‘s 40th anniversary special this Sunday, it seems everyone is posting their lists of all-time best sketches and mean-spirited cast member rankings.

And while we appreciate “Behind The Music: Blue Oyster Cult,” “Matt Foley: Motivational Speaker,” and “Sinead O’Connor’s Pope Portrait Gallery” as much as the next SNL-phile, we’d like to recognize a collection of bits that remain near and dear to us… despite, or perhaps because of, their less-famous status. As ignorant millennials who were born too late for that golden Belushi era (Jim Belushi, right?) , our picks lean heavily on post-1990 SNL. Fighting – or at Least Responding to – War and Terrorism with Comedy. Welcome to the latest installment of Tragedy Plus Time. 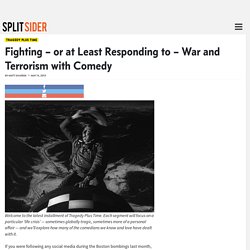 Each segment will focus on a particular ‘life crisis’ — sometimes globally tragic, sometimes more of a personal affair — and we’ll explore how many of the comedians we know and love have dealt with it. If you were following any social media during the Boston bombings last month, you would have observed the global dialogue quickly shift from mundane chatter to the somber details of the attack. Concerns for safety, information about what had transpired, and speculation on the culprits behind it dominated the national conversation.

Remarks about any other topic were deemed callous and inappropriate. Rise-of-the-sadcom. Tig Notaro: Healed And Humorous In New HBO Special. Executive producer and film subject Tig Notaro of ‘Tig’ poses for a portrait at the Village at the Lift Presented by McDonald’s McCafe during the 2015 Sundance Film Festival on January 26, 2015 in Park City, Utah. 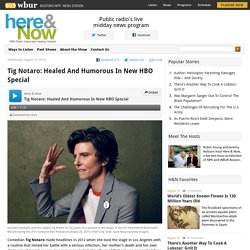 (Larry Busacca/Getty Images) Comedian Tig Notaro made headlines in 2012 when she took the stage in Los Angeles with a routine that mined her battle with a serious infection, her mother’s death and her own diagnosis of breast cancer. Her career exploded: the album of that set was nominated for a Grammy. Notaro is the focus of the new Netflix documentary “Tig,” and her comedy special “Tig Notaro: Boyish Girl Interrupted” premieres on HBO this Saturday. Too Many Cooks. How many cooks is too many cooks? 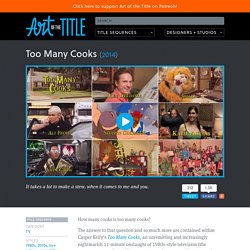 The answer to that question and so much more are contained within Casper Kelly’s Too Many Cooks, an unremitting and increasingly nightmarish 11-minute onslaught of 1980s-style television title sequences, complete with puppet cat, anthropomorphic typography, and, of course, a cannibal machete murderer. Much like the TV shows it’s lampooning, Too Many Cooks begins innocently enough. Man Seeking Woman (2015) A young New Yorker walks away, seemingly calm from a freshly dead relationship, with some garbage bags, a terrarium, and his own personal raincloud overhead. 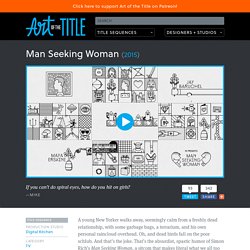 Oh, and dead birds fall on the poor schlub. And that’s the joke. That’s the absurdist, spastic humor of Simon Rich’s Man Seeking Woman, a sitcom that makes literal what we all too often internalize in the emotional minefields of love. To convey that sense of romantic and manic whiplash, Digital Kitchen assembled the FXX show’s title sequence with a series of snappy black-and-white animations. How to Tell a Story, and Other Essays by Mark Twain. BoJack Horseman. BoJack is half-man, half-horse, and all washed up. 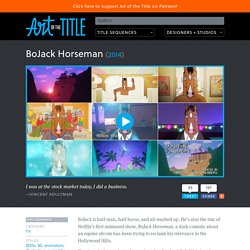 He’s also the star of Netflix’s first animated show, BoJack Horseman, a dark comedy about an equine sitcom has-been trying to reclaim his relevance in the Hollywood Hills. The show is the product of comedy writer Raphael Bob-Waksberg’s heartfelt humour and cartoonist Lisa Hanawalt’s lifelong obsession with drawing goofy animals. The opening sequence directed by Mike Roberts and with music by Patrick and Ralph Carney features BoJack floating through the spaces of his life, disconnected from everyone and everything, staring bleakly into the eyes of the viewer.

The sequence is colourful and intricate, the details inviting close inspection — particularly as they evolve over the course of the series. The title sequence, and the ensuing show, is powered by BoJack and his ennui, and the screwy cast of characters in his orbit. Année 2010 - Accueil. Louis C.K.'s GQ Cover Story - May 2014. The greatest jokes, Louis C.K. tells me, never register as jokes. 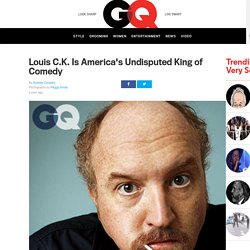 Not quite. The punch line of a great joke may punctuate it and make people laugh, "but it doesn’t solve the joke, doesn’t stop it, so the joke keeps going and going and going... " And the more it keeps going, he explains, the more it tends to "point. " "Toward what? " I ask. "Well...nothing. " "I’ll give you the perfect example," he offers, "but... Fair enough. After I finish laughing, C.K. continues. When it comes to his own jokes, C.K. is proudest of those for which he must commit with Method-actor rigor to some rhetorical or moral absurdity—and then take his argument several parsecs beyond its "logical" conclusion. 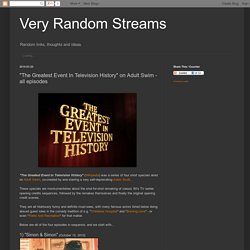 These specials are mockumentaries about the shot-for-shot remaking of classic 80's TV series opening credits sequences, followed by the remakes themselves and finally the original opening credit scenes. They are all hilariously funny and definite must-sees, with many famous actors listed below doing absurd guest roles in the comedy tradition of e.g. "Childrens Hospital" and "Burning Love" - or even "Parks And Recreation" for that matter. The Best of Good Neighbor, the Sketch Group ‘SNL’ Just Hired - Splitsider. Edgar Wright - How to Do Visual Comedy. Nous perdons notre temps pour mieux occuper le vôtre. La philosophie et le rire. Where To Stream Movies & Shows on Netflix, Hulu, Amazon Instant, HBO Go. Six seasons and a movie has always been Community’s mantra, and this past Tuesday, June 2, Yahoo Screen finished making the first half of that (often-screamed!)

Saying a reality. Though there were several incredible moments in this past season—including PSA about incest—the real breakout stars were two characters that have been in the show since episode one: Britta and Annie (Gillian Jacobs and Alison Brie). This season more than any other has allowed the women of Greendale to really flex their comedic chops, and I have to say, it’s a shame it took this long for them to get the comedic attention they so clearly deserve. I’m not by a long shot saying Community is sexist. Liste des références culturelles dans les épisodes des Simpson. Video Game Comedy Is Hard, But it’s Getting Easier - Splitsider. Recently, I revisited one of my favorite games from last year, The Stanley Parable. Developed by Davey Wreden and released for Steam, it’s a bit difficult to describe the game in brief (particularly since half the fun is just diving into it), but basically, it’s structured like a choose-your-own-adventure story.

You assume the role of Stanley, a faceless drone who leaves his office one day to discover all his co-workers have gone missing. As you move through the office to investigate, the Narrator, brilliantly played by Kevan Brighting, comments on your actions and surroundings and, crucially, speculates on your next move. For instance, when you come to two open doors, he says you’ll move through the door on the left. You can choose to follow the narrator’s instructions, or you can choose to ignore him and go your own way — each of the several choices the game presents offers its own branching path, each with a different ending.

Fred Armisen Doesn’t Sleep (Much) Fred Armisen could really use another project. At the moment, all he’s doing is writing, producing and starring in the IFC show Portlandia, leading and curating the band on Late Night with Seth Meyers, guest-starring on shows like Modern Family, Brooklyn Nine-Nine and Broad City, doing social experiments for Heineken (more on that below) and creating a new show for IFC called American Documentary with fellow SNL alums Seth Meyers and Bill Hader. Yep, that’s all. What a shirker. We recently chatted with Armisen about all of his projects, his transition from music to comedy in the late ’90s and why sleeping for eight hours makes him feel guilty. “In New York, people go from Point A to Point B. You’re making the rest of us look bad. In all seriousness, how do you find time to do everything?

We also read that you sleep very little. Like, four hours a night? Do you think the experiment would have gone differently if you’d done it in Portland instead of New York? Who's who on Portlandia. 1. Winter in PortlandiaPeter and Nance cut pasta; ALSO: Moving sun; Candace and Toni get a visit from Candace's son; Food coma, nap time; Bryce and Lisa's electrical outlet hotel; Fred and Carrie soup truck; Gahvin shows off his studio.

GUEST STARS: Bobby Moynihan, Jim Gaffigan, Matt Lucas and Jack White. 2. The Simpsons take the Hollywood Bowl. Celebrities Pick Their Fave Simpsons Episodes. Is the Future of Comedy the Comedy/Drama Hybrid? - Splitsider. In a recent Salon interview, Bob Odenkirk warns aspiring writers to “get out of comedy, because it’s about to collapse.” Sketch comedy, he says, is having its time in the sun now — what with YouTube, Comedy Central’s burgeoning lineup and the legions of theater sketch teams popping up all over — but the market is becoming saturated. What’s next then? He suggests that once the market tires of short sketches, it may turn to more long-form, dramatic material. “I do think that after sketch comes story,” he speculates. And when you look at the TV landscape, that makes sense.

But regardless of exactly how each show borrows, the bottom line is that all these series are following Louie and Girls’ lead by digging beneath the obvious elements of comedy to explore the uncomfortable or painful issues that lie beneath any good punchline. YouTube. How to Start Your Career in Comedy: A Guide for College Students. 9 Things Lena D. and Mindy K. Said at Sundance. Donc Voilà Quoi podcast - Emissions. An Oral History Of ‘Diversity Day,’ A Defining Episode Of ‘The Office’ How ‘Parks and Rec’ Transcended its Mockumentary Roots - Splitsider. Will Forte on 'Last Man on Earth,' 'SNL' and Bowling for Fish Tanks. The Rise of Consumer Comedy - Splitsider. Misery Loves Funny People. How Jim Norton, of All People, Taught Me Trans Acceptance - Splitsider. ‘BoJack Horseman,’ ‘Inside Out,’ and the Beauty of Difficult Emotions - Splitsider.

The 20 Greatest Standup Specials of All Time.