Drawing websites which could be utilised

Young Architect Guide: How to Convince Your Audience With a Powerful Project Narrative. Whether written or verbal, the way architecture projects are described to an audience often comes together as an afterthought relative to the rest of the effort put into them. 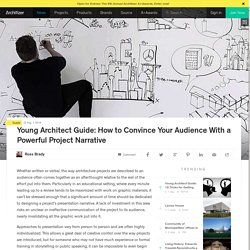 Particularly in an educational setting, where every minute leading up to a review tends to be maximized with work on graphic materials, it can’t be stressed enough that a significant amount of time should be dedicated to designing a project’s presentation narrative. A lack of investment in this area risks an unclear or ineffective communication of the project to its audience, nearly invalidating all the graphic work put into it. The Best Architecture Drawings of 2015. The Best Architecture Drawings of 2015 We believe good projects should be able to express and explain themselves. 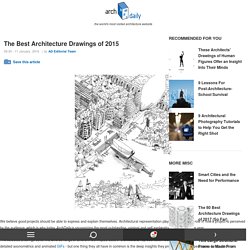 Architectural representation plays a fundamental role in how a project is perceived by the audience, which is why today ArchDaily is recognizing the most outstanding, original and self explanatory drawings of the year. The selected drawings cover the diverse range of different techniques used in architectural representation today, from hand drawing images to perfectly detailed axonometrics and animated GIFs - but one thing they all have in common is the deep insights they provide into the appearance, construction or concept of the buildings they represent. 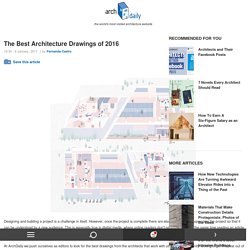 However, once the project is complete there are also challenges in expressing the project so that it can be understood by a new audience. This is especially true in digital media, where online readers don't necessarily spend the same time reading an article as in print media. This way, drawings and all visual representation and it's new forms -such as the animated Gifs- play an important role in the project's understanding At ArchDaily we push ourselves as editors, as well as the architects in our network, to get the best out of the projects we receive and share with the world so that we can deliver knowledge and inspiration to millions of people.

Architecture and the Lost Art of Drawing. Michael Graves & Associates A freehand sketch of the south facade of the Denver Central Library, which the writer designed. 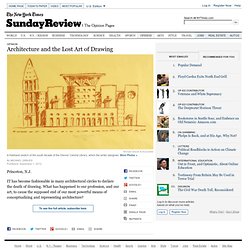 More Photos » IT has become fashionable in many architectural circles to declare the death of drawing. What has happened to our profession, and our art, to cause the supposed end of our most powerful means of conceptualizing and representing architecture? Architectural Sketching [or How to Sketch like Bob] Architectural sketching is becoming a thing of the past – at least that’s how it seems to me most days. 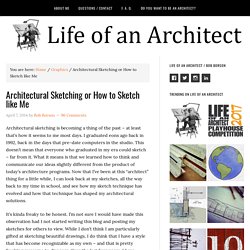 I graduated eons ago back in 1992, back in the days that pre-date computers in the studio. This doesn’t mean that everyone who graduated in my era could sketch – far from it. What it means is that we learned how to think and communicate our ideas slightly different from the product of today’s architecture programs. Now that I’ve been at this “architect” thing for a little while, I can look back at my sketches, all the way back to my time in school, and see how my sketch technique has evolved and how that technique has shaped my architectural solutions.

What do we mean by perspective? Perspective drawings show objects as you would see them in the real world - in three dimensional view. 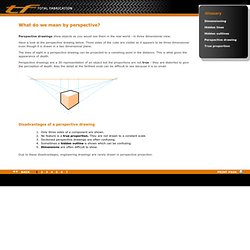 Have a look at the perspective drawing below. Three sides of the cube are visible so it appears to be three dimensional even though it is drawn in a two dimensional plane. The lines of sight in a perspective drawing can be projected to a vanishing point in the distance. This is what gives the appearance of depth. Perspective drawings are a 3D representation of an object but the proportions are not true – they are distorted to give the perception of depth. Engineering Drawing and Sketching. By Ernesto E. 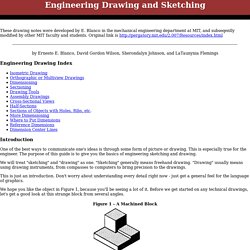 Blanco, David Gordon Wilson, Sherondalyn Johnson, and LaTaunynia Flemings Engineering Drawing Index. Drawing like an Architect. “How good do you need to be at drawing if you want to become an architect” “How can I be an architect – I can’t draw” I wish I got one frequent flyer mile every time I heard one of those two questions … I would have like 300 miles. 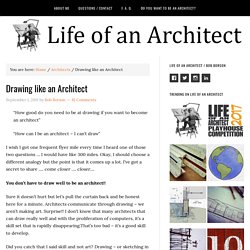 Okay, I should choose a different analogy but the point is that it comes up a lot. Sketchapalooza. Every now and again, someone will try to convince me that the design process is faster using computer software than sketching. 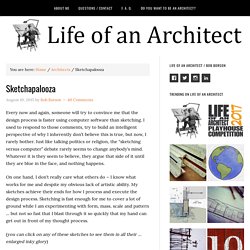 I used to respond to those comments, try to build an intelligent perspective of why I inherently don’t believe this is true, but now, I rarely bother. Just like talking politics or religion, the “sketching versus computer” debate rarely seems to change anybody’s mind. Whatever it is they seem to believe, they argue that side of it until they are blue in the face, and nothing happens. The Lantern House - Construction Drawings. Construction drawings are the things that turn ideas into actualities and trying to create drawings that demonstrate the vision and intended level of craft is a conscious effort on my part. 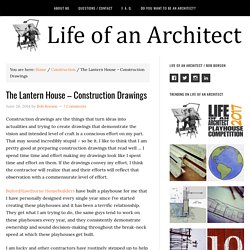 That may sound incredibly stupid – so be it. I like to think that I am pretty good at preparing construction drawings that read well … I spend time time and effort making my drawings look like I spent time and effort on them. If the drawings convey my effort, I think the contractor will realize that and their efforts will reflect that observation with a commensurate level of effort.