(18) 60s scifi. Free movies. Best american movies - Recherche Google. Watch Movies Online. Watch Movies Online. The Nifty Fifties. Watch Classic Movies online on Computer. Cin-Eater: Golden Girl (1951) and Les Girls (1957) Mitzi Gaynor is a recent re-discovery for me, having never been a fan of South Pacific, which I saw once eons ago and promptly moved on from. 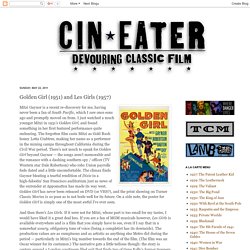 I just watched a much younger Mitzi in 1951’s Golden Girl, and found something in her first featured performance quite endearing. The forgotten film casts Mitzi as Gold Rush honey Lotta Crabtree, making her name as a performer in the mining camps throughout California during the Civil War period. There’s not much to speak for Golden Girl beyond Gaynor — the songs aren’t memorable and the romance with a dashing southern spy / officer (TV Western star Dale Robertson) who robs Union payrolls feels dated and a little uncomfortable.

The climax finds Gaynor bleating a tearful rendition of Dixie in a high-falootin’ San Francisco auditorium just as news of the surrender at Appomattox has made its way west. Golden Girl has never been released on DVD (or VHS?) And then there’s Les Girls. Golden Girl (1951) Directed by Lloyd Bacon Running time: 108 minutes. 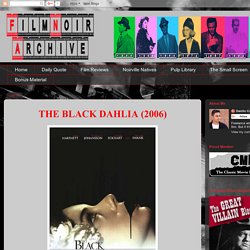 Through diction, characters, and a grating resolution, the story underpins the romanticism of 40’s Los Angeles with it’s darkest criminal hour: Elizabeth Short, sliced up and dumped in an empty field one chilly morning. Worth a read without hesitation, either as a solo story or part of the author’s larger L.A. quartet. As for this cinematic adaptation, brought to life by the typically capable hands of all who were involved, the bar for pulp quality takes a dive faster than a drunk down a rickety flight of steps. The potential for greatness was almost impossible to screw up. Ellroy’s last big budget venture was the Academy Award winning classic L.A. On paper, De Palma didn’t seem like a bad choice to tackle Ellroy’s winding mystery.

That victim, Elizabeth Short, is the only character propped up onscreen that provides any real connection with the audience. The 100 Best Film Noirs of All Time. Since its coining in 1946 by French critic Nino Frank, who observed from afar something dark, quite literally, going on at the American cinema, the term “film noir” has been debated and debated and debated some more.

Is it a genre? A subgenre? A movement? A trend? A commentary? Noir was nothing if not a reaction, a reflection of a nation reeling from despicable evil overseas and revolutionary upheaval on the domestic front. But things get complicated here, and fast. Some define noir as or by a tone, and it’s very much a mood, a sensibility. Enter the private detective and his antihero ilk—a scarred, brooding fella who for his considerable flaws was sympathetic. Except it wasn’t that easy. And so noir cast its misfits—gun-toting, hard-drinking, lipstick and stiletto-wearing human chimneys of neuroses—into a seductive, violent postwar labyrinth, in which the terror was internal and external. Was noir a conscious “response”? An outsider called it. 100. Great Movies. Catch Up TV, Movies, Documentaries, News & Sport. Combustible Celluloid film list - 1000 of the World's Greatest Films. Combustible Celluloid Review - The Man on the Eiffel Tower (1949), Harry Brown, based on a novel by Georges Simenon, Burgess Meredith, Charles Laughton, Franchot Tone, Burgess Meredith, Robert Hutton, Jean Wallace, Patricia Roc, Belita, George Thorpe, Wil.

The Eiffel Class By Jeffrey M. 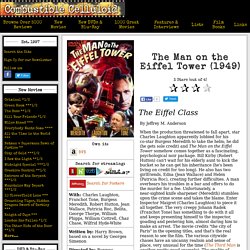 Anderson When the production threatened to fall apart, star Charles Laughton apparently lobbied for his co-star Burgess Meredith to take the helm; he did (he gets sole credit) and The Man on the Eiffel Tower somehow comes together as a fascinating, psychological noir package. Bill Kirby (Robert Hutton) can't wait for his elderly aunt to kick the bucket so he can get his inheritance (he's been living on credit for too long). He also has two girlfriends, Edna (Jean Wallace) and Helen (Patricia Roc), creating further difficulties. DVD Details: The film was shot in "Anscocolor," which is severely washed out in most public domain prints and DVDs.

A Good Movie to Watch - The Good Movies You Haven't yet Seen.