Mihaly Csikszentmihalyi über "Flow" Your Brain Is Hardwired to Snap. By Simon Worrall We’ve all been there: Some jerk cuts you off on the highway. 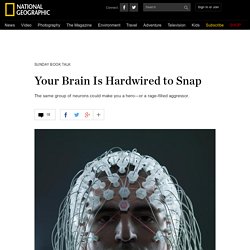 You lean on the horn, scream abuse. You want to get out the car and kick the @#$% out of the bozo’s SUV. Road rage is just one example of what neurobiologist Douglas Fields calls “snapping.” From domestic violence to mass shootings, the news is full of stories of seemingly “normal” people suddenly going berserk. But how and why does this happen?

Speaking from his home in Bethesda, Maryland, Fields explains what neuroscience is teaching us about rage; how the Baltimore riots were about tribe, not race; and why men are more prone to violence—and heroism—than women. In the famous TV show about a serial killer, Dexter says that he is driven to kill by his “lizard brain.” [Laughs] That’s an out-of-date concept, dating back half a century. You were inspired to write this book by an incident while on vacation with your daughter. The 9 Triggers That Make Us Angry, According To Science. Why does traffic or being cut on the road lead to road rage? 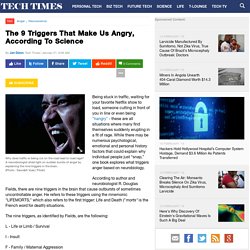 A neurobiologist shed light on sudden bursts of anger by explaining the nine triggers in the brain. (Photo : Saurabh Vyas | Flickr) Being stuck in traffic, waiting for your favorite Netflix show to load, someone cutting in front of you in line or even being "hangry" - these are all situations where many find themselves suddenly erupting in a fit of rage. While there may be numerous psychological, emotional and personal history factors that could explain why individual people just “snap,” one book explores what triggers anger based on neurobiology.

According to author and neurobiologist R. The nine triggers, as identified by Fields, are the following: L - Life or Limb / Survival. Why We Snap: Understanding the Rage Circuit in Your Brain by Douglas Fields. Snapping Violently Rage is a short madness. 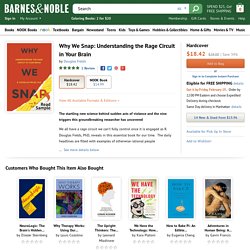 Horace, Book 1, Epistle ii, line 62 You mustn’t say things about Melanie,” he warns her. “Who are you to tell me I mustn’t?” Your Lizard Brain. Official Website of Dexter on Showtime - America's Favorite Serial Killer. Secrets of the Brain. Van Wedeen strokes his half-gray beard and leans toward his computer screen, scrolling through a cascade of files. 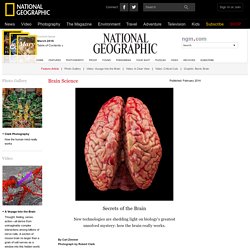 We’re sitting in a windowless library, surrounded by speckled boxes of old letters, curling issues of scientific journals, and an old slide projector that no one has gotten around to throwing out. “It’ll take me a moment to locate your brain,” he says. On a hard drive Wedeen has stored hundreds of brains—exquisitely detailed 3-D images from monkeys, rats, and humans, including me. Wedeen has offered to take me on a journey through my own head. “We’ll hit all the tourist spots,” he promises, smiling. This is my second trip to the Martinos Center for Biomedical Imaging, located in a former ship-rope factory on Boston Harbor.

The magnets that now surrounded me began to rumble and beep. As they see the brain in action, neuroscientists can also see its flaws. On my return trip to his lab Wedeen finally locates the image from my session in the scanner. “It’s all grids,” says Wedeen. Aggressive behaviour. Group versus individual selection As is stated in the section The nature of animal aggression, in most cases animals fight over food, shelter, and mates or over territories where these can be found. 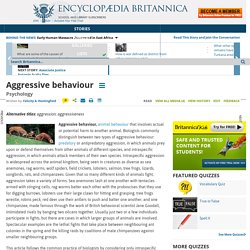 Therefore, in functional terms, it is easy to explain why animals fight: they do so to gain access to valuable resources. A more difficult question to answer is why conflicts are often resolved conventionally, by displays and threats, rather than by out-and-out fighting. For example, why does a stag, instead of using its antlers in an all-out bid for victory, withdraw from a fight after an exchange of roars, thus leaving its rival in possession of a group of fertile females? For a long time the generally accepted answer was that animals refrain from engaging in overt fighting because the high level of injury that this can cause is disadvantageous for the species as a whole. Cost-benefit analysis Territorial behaviour Game theory: the Hawk-Dove model Felicity A. Your Brain Is Hardwired to Snap. PSYCHOLOGY. Die Wurzel des Wahns - DER SPIEGEL. 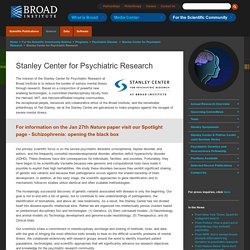 Based on a conjunction of powerful new enabling technologies, a committed interdisciplinary faculty from the Harvard, MIT, and Harvard-affiliated hospital communities, the exceptional people, resources and collaborative ethos of the Broad Institute, and the remarkable philanthropy of Ted Stanley, we at the Stanley Center are galvanized to make progress against the ravages of severe mental illness.

Our primary scientific focus is on the severe psychiatric disorders schizophrenia, bipolar disorder, and autism, and the frequently comorbid neurodevelopmental disorder, attention deficit hyperactivity disorder (ADHD). These illnesses have dire consequences for individuals, families, and societies. The increasingly successful discovery of genetic variants associated with disease is only the beginning.