A bit about the Deep-Web. Freedom Toolbox. Deepweb. Darknet. Intro to Darknets Tor and I2P. Deep_Web. So, You Want A Searchable Database, Huh? - www.htmlgoodies.com. Use these to jump around or read it all... 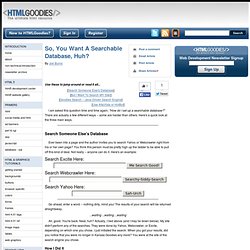 [Search Someone Else's Database] [But I Want To Search MY Site!] [Goodies Search -- Java-Driven Search Engine] [Use AltaVista or HotBot] I am asked this question time and time again, "How do I set up a searchable database? " There are actually a few different ways -- some are harder than others. Here's a quick look at the three main ways. Old Newspapers on line searchable databases. The Educator's Reference Desk: Resource Guides. Discover over 70,000+ databases and specially search engines. Discover over 70,000+ databases and specially search engines. 100 Useful Tips and Tools to Deep Web. 100 Useful Tips and Tools to Research the Deep Web. By Alisa Miller Experts say that typical search engines like Yahoo! 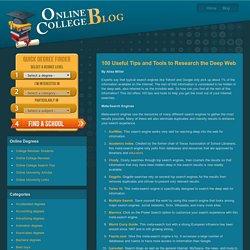 And Google only pick up about 1% of the information available on the Internet. Your entry to the Deep Web, Darknet, Onionland, Tor, Hidden Wiki, Deepweb. Deep Web Search Engines. Where to start a deep web search is easy. 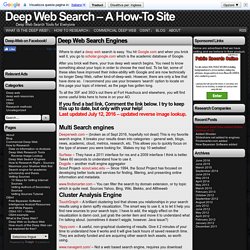 You hit Google.com and when you brick wall it, you go to scholar.google.com which is the academic database of Google. After you brick wall there, your true deep web search begins. You need to know something about your topic in order to choose the next tool. The Deep Web and Open Source Intelligence (OSINT): Two Peas in a Pod. At BrightPlanet we often throw around the acronym OSINT and talk about open source intelligence but what is it, what/if anything does it have to do with the Deep Web and how is it being used? 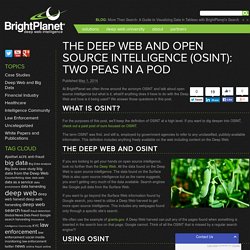 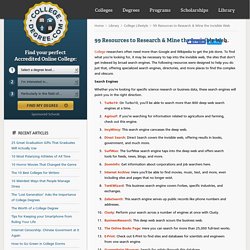 To find what you're looking for, it may be necessary to tap into the invisible web, the sites that don't get indexed by broad search engines. The following resources were designed to help you do just that, offering specialized search engines, directories, and more places to find the complex and obscure. Search Engines Whether you're looking for specific science research or business data, these search engines will point you in the right direction. Deep Web Search Engines. 10 Search Engines to Explore the Invisible Web. Not everything on the web will show up in a list of search results on Google or Bing; there are lots of places that their web crawlers cannot access. 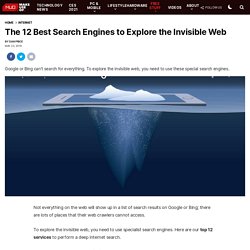 Invisible Web Directory. An Up-To-Date Layman's Guide To Accessing The Deep Web. If you binge-watched the second season of House of Cards, along with a reported 15% of Netflix's 44 million subscribers, you may be newly interested in the Deep Web. 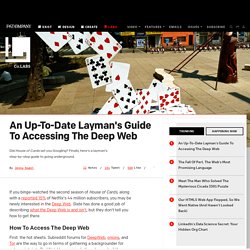 Slate has done a good job of describing what the Deep Web is and isn't, but they don't tell you how to get there. How To Access The Deep Web First: the hot sheets. 21 Cool Internet Tricks to Revolutionize Your Browsing. Thanks to a cool Reddit thread, Internet savvy users have come forward with their best tricks, tips and hacks to revolutionize your browsing experience and make everything that much more enjoyable. 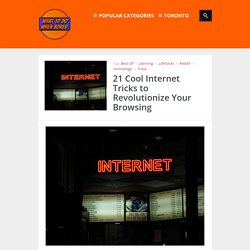 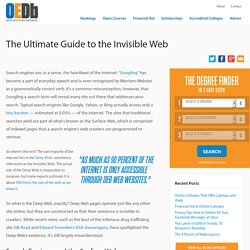 It’s a common misconception, however, that Googling a search term will reveal every site out there that addresses your search. Typical search engines like Google, Yahoo, or Bing actually access only a tiny fraction — estimated at 0.03% — of the internet. The sites that traditional searches yield are part of what’s known as the Surface Web, which is comprised of indexed pages that a search engine’s web crawlers are programmed to retrieve. "As much as 90 percent of the internet is only accessible through deb web websites. " So where’s the rest? Working Links To The Deep Web. Hidden Wikis Index pages in Wiki-based format. 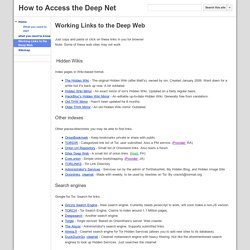 The Hidden Wiki - The original Hidden Wiki (after Matt's), owned by ion. Created January 2009. Went down for a while but it's back up now. Your entry to the Deep Web, Darknet, Onionland, Tor, Hidden Wiki, Deepweb. Darknet (file sharing) Darknets are distinct from other distributed peer-to-peer networks as sharing is anonymous (that is, IP addresses are not publicly shared), and therefore users can communicate with little fear of governmental or corporate interference.[2] For this reason, darknets are often associated with dissident political communications and illegal activities.

More generally, the term "darknet" can be used to describe all non-commercial sites on the Internet,[3] or to refer to all "underground" web communications and technologies, most commonly those associated with illegal activity or dissent.[2] The Microsoft researchers argued that the presence of the darknet was the primary hindrance to the development of workable DRM technologies.

The term has since been widely adopted and has seen usage in major media sources, including Rolling Stone and Wired. Almost all known darknets are decentralized and therefore considered peer to peer. Operation Darknet. Overview Operation Darknet (also known as #OpDarknet) is the codename for a series of distributed denial-of-service (DDoS) attacks carried out by Anonymous on Lolita City, a child pornography sharing website that is accessible in anonymity via The Tor Project’s encrypted service.

This campaign is not to be confused with two earlier Anonymous operations that have shared the same name, one from January 2010 to provide a solution to the censorship threatened by the ACTA (Anti-Counterfeit Trade Agreement) and another initiative from April 2011 to inform Anonymous members to start using I2P to protect their anonymity. Background The operation began in early October 2011 with a mission to expose the underground pedophile community known as “Lolita City.” The website was built via Tor, a software that allows users to host and browse websites anonymously.

Notable Developments October 14th – 15th: PasteBin Release October 15th: Target Freedom Hosting Around 5 p.m. Cipherspaces/Darknets: An Overview Of Attack Strategies. 'Anonymous marketplace': software a boon for criminals and the 'darknet' A nonprofit company largely funded by the US government is inadvertently providing child pornographers, drug dealers and other criminals around the world with software that allows them to remain anonymous on the internet.

The little-known organisation, Tor Project Inc, says its free program is designed to help people protect themselves from internet surveillance. Users include those speaking out against oppressive political regimes in other countries, corporate whistle-blowers, law enforcement officials, and domestic abuse victims.

But the software, which can easily be downloaded from the Tor Project website, also is attracting a growing number of people who trade illegal pornographic material and buy and sell drugs on a part of the Web known as the "darknet," according to federal authorities, advocates for children, and internet specialists. Advertisement The darknet is "a secret internet," said Chester Wisniewski, senior adviser at Burlington computer security company Sophos Inc.