The Problem with Christus Victor. Universalism is not the only topic in Rob Bell's Love Wins that deserves comment, though given the buzz, you'd think that's all he discusses. 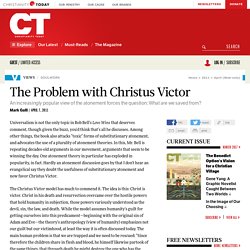 Among other things, the book also attacks "toxic" forms of substitutionary atonement, and advocates the use of a plurality of atonement theories. In this, Mr. Bell is repeating decades-old arguments in our movement, arguments that seem to be winning the day. One atonement theory in particular has exploded in popularity, in fact. Hardly an atonement discussion goes by that I don't hear an evangelical say they doubt the usefulness of substitutionary atonement and now favor Christus Victor.

The Christus Victor model has much to commend it. Indeed, we are enslaved to powers beyond our control, both personally and corporately. On the other hand, "neurotic substitutionary atonement" needs to be abandoned. Many interesting comparisons can be made between the two theories. SoulWork Previous SoulWork Columns: How to Date Jesus' Wife Interview by Kevin P. About Brian Zahnd - Brian Zahnd. Brian Zahnd Brian Zahnd is the founder and lead pastor of Word of Life Church, a Christian congregation located in the heartland of America in Saint Joseph, Missouri. 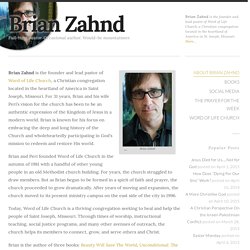 For 31 years, Brian and his wife Peri’s vision for the church has been to be an authentic expression of the Kingdom of Jesus in a modern world. Of Monsters and Mars: How Brian Zahnd Is Saving Evangelical Faith (A Review)  This post originally appeared on The Nuance at Patheos. 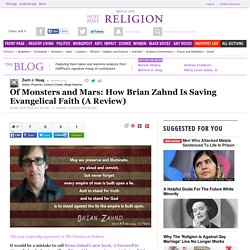 It would be a mistake to call Brian Zahnd's new book, A Farewell to Mars, "a book about pacifism. " It would be an even bigger mistake to call it "a book about Christian pacifism. " Brian says as much when he clarifies that he doesn't claim the pacifist label at all. He is not a pacifist but a Christian - a follower of Jesus, including Jesus's radical and very political ideas (Ch. 1). In other words, the gospel of peace shouldn't be thought of as some extraneous add-on to Christian identity, best left to the social justice-y liberals and dreadlocked new monastics. In other words, A Farewell to Mars has the potential to save evangelical faith. It has been instrumental in saving mine. Jesus Died for Us...Not for God - Brian Zahnd. Jesus Died for Us…Not for GodBrian Zahnd “You killed the Author of life, whom God raised from the dead.” 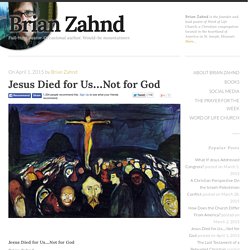 –The Apostle Peter, Acts 3:15 Golgotha is where the great crimes of humanity — pride, rivalry, blame, violence, domination, war, and empire — are dragged into the searing light of divine judgment. One-story-1.pdf. Brian Zahnd on justice and atonement. A friend asked me to comment on this passage from a recent blog post of Brian Zahnd's, How Does "Dying For Our Sins" Work? 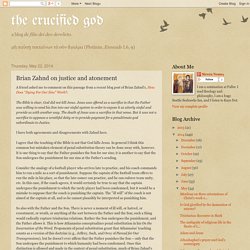 : The Bible is clear, God did not kill Jesus. Jesus was offered as a sacrifice in that the Father was willing to send his Son into our sinful system in order to expose it as utterly sinful and provide us with another way. THE RANSOM THEORY OF THE ATONEMENT. Experimental Theology: Christus Victor and Progressive Christianity. While at Streaming last week during one of the panel discussions I was asked about my use of Christus Victor atonement in my book The Slavery of Death. 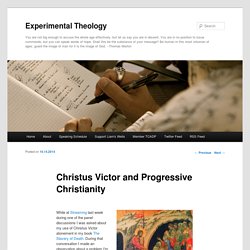 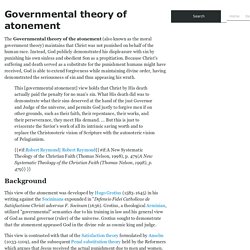 Instead, God publicly demonstrated his displeasure with sin by punishing his own sinless and obedient Son as a propitiation. Because Christ's suffering and death served as a substitute for the punishment humans might have received, God is able to extend forgiveness while maintaining divine order, having demonstrated the seriousness of sin and thus appeasing his wrath. Background. Penal substitutionary atonement. Penal substitutionary atonement refers to the doctrine that Christ died on the cross as a substitute for sinners. 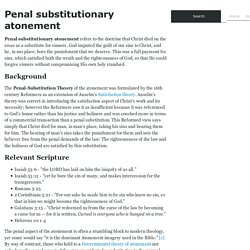 God imputed the guilt of our sins to Christ, and he, in our place, bore the punishment that we deserve. This was a full payment for sins, which satisfied both the wrath and the righteousness of God, so that He could forgive sinners without compromising His own holy standard. Background. CrossPaper.pdf. Monster God or Monster Man - Debate - Resources - Preparing Forerunner Messengers and the Praying Church. Is God a Monster?