A Much-Needed Primer on Cultural Appropriation. By Katie J.M. 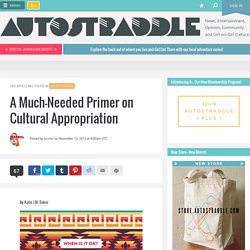 Baker This fall alone, Paul Frank served “Rain Dance Refresher” cocktails at a “Pow Wow”-themed fashion week event, ASOS debuted a “Go Native” Navajo-inspired line with cringe-inducing copy, and Karlie Kloss walked the Victoria’s Secret Fashion Show runway in a floor-length war bonnet and not much else. Why are fashion brands so bad at discerning the difference between cultural appropriation and appreciation — and, moreover, why don’t they care about putting in enough effort to get it right? Fashion brands are often quick to apologize after appropriation-related controversy ensues; most recently, Victoria’s Secret released a statement this week “sincerely” apologizing “as we absolutely had no intention to offend anyone.” Apologies are nice and all, but they’re not enough; how is it possible that, in the year 2012, no one at VS thought twice about how Kloss’s “sexy native” get-up might upset people? Cultural Appropriation: A Conversation - Sanaa Hamid.

Swanpinions / What is cultural appropriation, and how to avoid it. MTV's Look Different. WHAT'S WRONG WITH CULTURAL APPROPRIATION. The Dos and Don'ts of Cultural Appropriation. Sometime during the early 2000s, big, gold, “door-knocker” hoop earrings started to appeal to me, after I’d admired them on girls at school. 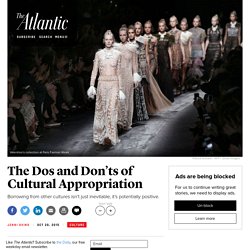 It didn’t faze me that most of the girls who wore these earrings at my high school in St. Louis were black, unlike me. And while it certainly may have occurred to me that I—a semi-preppy dresser—couldn’t pull them off, it never occurred to me that I shouldn’t. This was before the term “cultural appropriation” jumped from academia into the realm of Internet outrage and oversensitivity. Self-appointed guardians of culture have proclaimed that Miley Cyrus shouldn’t twerk, white girls shouldn’t wear cornrows, and Selena Gomez should take off that bindi. At my house, getting dressed is a daily act of cultural appropriation, and I’m not the least bit sorry about it.

As I dress in the morning, I deeply appreciate the craftsmanship and design behind these items, as well as the adventures and people they recall. 1. This is painfully obvious. 2. 3. 4. Cultural appropriation: why they're not 'just clothes' — The Bowdoin Orient. Whether you are a prospective student, in town for Family Weekend, or just passing through Brunswick, the town has a lot to offer. 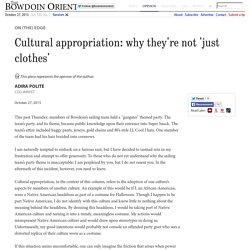 The Orient editors picked a sampling of some of their favorite restaurants, sights, activities and places to stay near Bowdoin. Eat Despite being a small town, Brunswick has a big restaurant scene. The restaurants cover a range of ethnicities, from inventive modern and international cuisine to classic Maine grub. Fat Boy | 111 Bath Road, Brunswick | facebook.com/fatboydriveinAlthough the waitresses aren’t roller-skating to your car, Fat Boy is as old school as it gets. Open Monday-Thursday 11 a.m. to 8 p.m., Friday and Saturday 11 a.m. to 8:30 p.m. and Sunday 11 a.m. to 8 p.m. 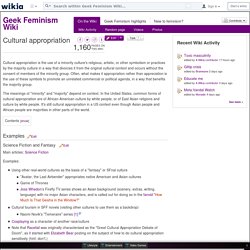 Often, what makes it appropriation rather than appreciation is the use of these symbols to promote an unrelated commercial or political agenda, in a way that benefits the majority group. 7 Culturally Appropriative Halloween Costumes To Avoid This Year. If you grew up in the United States, odds are that you've witnessed your fair share of culturally appropriative Halloween costumes. 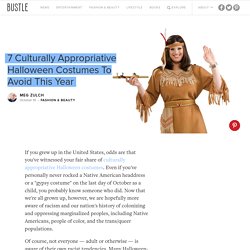 Even if you've personally never rocked a Native American headdress or a "gypsy costume" on the last day of October as a child, you probably know someone who did. Now that we're all grown up, however, we are hopefully more aware of racism and our nation's history of colonizing and oppressing marginalized peoples, including Native Americans, people of color, and the trans/queer populations. Of course, not everyone — adult or otherwise — is aware of their own racist tendencies.

Top 10 Instances of Open and Unapologetic Celebrity Cultural Appropriation in 2013! Thanks to Halloween, outdoor music festivals and the college Greek system having access to social media, people of color are constantly bombarded with acts of cultural appropriation, but with the help of rich and ignorant celebrities, 2013 had to be cultural appropriations’ most visible year yet! 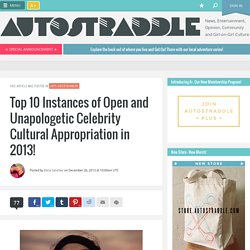 So, to those who attempt to add an entire race’s marginalized dress, dance or religious adornments to their own personal walk-in closets for the sake of ‘fashion’ and more importantly, to all the people of color/allies who haven’t been able to enjoy a moment’s peace on Facebook or YouTube this year without having to shout ‘REALLY?!” At your computer screens (be sure you have a pillow to scream into handy), I bring you my Top Ten Instances of Open and Unapologetic Celebrity Cultural Appropriation in 2013! 10. Selena Gomez Refuses to Research the Backstory of the Bindi. Cultural (Mis)Appropriation. Can we ever honorably use resources from diverse cultures in Unitarian Universalist practice? 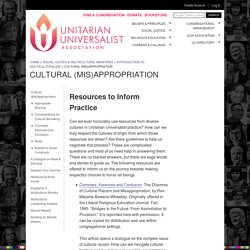 How can we truly respect the cultures of origin from which those resources are drawn? Are there guidelines to help us negotiate that process? These are complicated questions and most of us need help in answering them. There are no blanket answers, but there are sage words and stories to guide us. The following resources are offered to inform us on the journey towards making respectful choices to honor all beings. 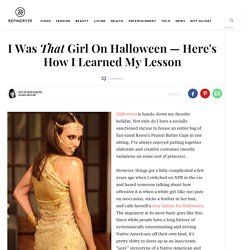 Halloween is hands-down my favorite holiday. Not only do I have a socially sanctioned excuse to house an entire bag of fun-sized Reese’s Peanut Butter Cups in one sitting, I’ve always enjoyed putting together elaborate and creative costumes (mostly variations on some sort of princess). However, things got a little complicated a few years ago when I switched on NPR in the car and heard someone talking about how offensive it is when a white girl (like me) puts on moccasins, sticks a feather in her hair, and calls herself a sexy Indian for Halloween. The argument at its most basic goes like this: Since white people have a long history of systematically exterminating and driving Native Americans off their own land, it’s pretty shitty to dress up as an inaccurate, “sexy” stereotype of a Native American and get wasted.

So I crossed Native American Princess off my list of potential cute costumes. Cornrows and Cultural Appropriation: The Truth About Racial Identity Theft. TIME columnist Abdul-Jabbar is a six-time NBA champion and league Most Valuable Player. 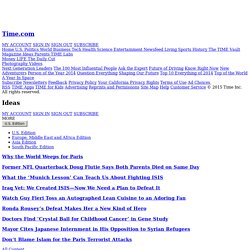 He is also a celebrated author, filmmaker and education ambassador whose life and career are the subject of Minority of One, a new documentary on HBO Sports. Is the current cornrow controversy much hairdo about nothing? Or a gateway crime against black culture that includes stealing everything from music to art to clothes to language? Cornrows are just the tip of the follicle, but because so many white celebrities have adopted this hairstyle, it has become the public platform to discuss the broader topic of cultural appropriation. 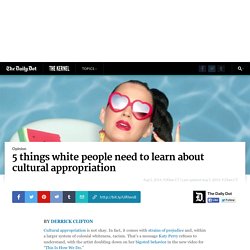 In fact, it comes with strains of prejudice and, within a larger system of colonial whiteness, racism. That’s a message Katy Perry refuses to understand, with the artist doubling down on her bigoted behavior in the new video for “This Is How We Do.” If you’re Katy Perry, for example, you believe it’s A-OK to don corn rows and gel down your baby hair, put on some long fingernails and so-called sassy mannerisms with a “blaccent” and slang to portray how you believe certain black women behave and speak. But when you do it, as a white artist, you perpetuate a long legacy of white cultural theft—in addition to bypassing all the racist and misogynist insults those black women must contend with on a daily basis. That includes being called “ghetto” by white (and other) people, typecast as a welfare queen or otherwise told that your natural hairstyles and expressions are inferior and unwelcome. Culture or costume: Cultural appropriation on Halloween - The Panther Online.

Picture an aerospace engineer who was born and raised on the Navajo Reservation, reduced to a sexy Indian princess Halloween costume for anyone to wear. That is what Leti Romo, assistant director for the Cross-Cultural Engagement, sees when she witnesses the cultural appropriation of her Native American culture. “Naturally, I think, people don’t look at a costume and they’re like, ‘Wow, that oppresses a lot of people,’ – it’s not generally your first instinct,” said Mani Woodley, a sophomore political science and history major and director of publicity for the Black Student Union. Woodley and Romo both feel strongly about how offensive cultural appropriation is in everyday life, especially when they see people disrespecting their cultures by wearing inappropriate Halloween costumes. Romo and Woodley both strive to make a difference on campus and make students more aware about this issue.

Woodley identifies as primarily Black, and also African American. Comments. The week in music: Nicki Minaj on cultural appropriation, Stewart Lee's ATP 2.0 and more. Sam Smith’s Spectre became the first Bond theme No 1 Sam Smith loves to talk about how little time he spends writing music. First he told the NME that Tom Petty-esque hit single Stay With Me took between 30 and 40 minutes to rustle up. Then he happily told BBC Radio 1’s Nick Grimshaw that he put together the Spectre theme in about 20 minutes. The hard graft appears to have more than paid off, with Writing’s on the Wall topping the UK singles chart last week, making it the first Bond theme to do so. Sorry about that No 2 with Skyfall, Adele. White People Accuse Beyonce Of Cultural Appropriation. I knew it would only be a matter of time before some white people tried to even the score with all the cultural appropriation accusations being herded their way these days, but I had no clue they’d use Beyoncé to do it (on Beyday no less).

Yesterday, the DailyMail ran a story on Beyoncé debuting new bangs for her 34th birthday — a simple post that should’ve conjured up no more than a quick commentary on the singer’s hair choice. Instead, some of the site’s readers tried to come for the queen in the worst way possible: accusing her of appropriating white women. Kerry Washington Was Accused Of Cultural Appropriation And Reacted In The Best Way.

People need to think about cultural appropriation when choosing Halloween costumes - The Breeze: Opinion. When we think of culture, we immediately think of norms and traditions that apply to us, whether through familial relations, friendships, clubs or the like. Rarely do we think of or appreciate cultures besides our own. Opinion: Cultural appropriation ruined Halloween – HS Insider. Let's Pick Costumes. Not Cultures: Cultural Appropriation in Fraternity & Sorority Communities - North American Interfraternity Conference.

Cultural appropriation done by many, understood by few - The State Press. With all of the attention in the media surrounding social issues, cultural appropriation has become a hot button topic, dividing friends and retrenching enemies alike. This is a subject I've wanted to tackle for a while but, for some reason, the words just wouldn't come. Well, guess what? They're here now, so let me break it down for you. From African American corn rows and Japanese kimonos to Cinco De Mayo parties and Indian or South Asian henna tattoos, we have all been a little bit responsible for appropriating cultures that are not our own. With Halloween quickly approaching, it's even more important to be sensitive to the cultures of others. ​ADAMES: Halloween is no excuse for cultural appropriation.

7 Ways to Make Your Wedding More Socially Conscious (And Feminist!) Soft Grunge: Mental Illness Is Not a Style. It’s Not Just Kylie: 7 Reasons Why White People Should Not Wear Black Hairstyles. Scathing Poetry on Why Racist College Parties Are So Disturbing. Epic Takedown of Racist Halloween Costumes (In the Form of a Baking Tutorial!) How Racism Shows Up When White People Dismiss People of Color's Reality.

What We Can All Learn From Nicki Minaj Schooling Miley Cyrus on Tone Policing. Is Your Halloween Costume Racist? 6 Steps to Dealing With a Friend Who Dressed Up as an 'Indian' for Halloween.