2014 - NERDGIRLS - herstory of electronic music. 10 Female Electronic Music Pioneers You Should Know. Magneticmag. EDM culture is a competitive one--with wannabes left and right--fighting tooth and nail to be "top dog" on the scene. 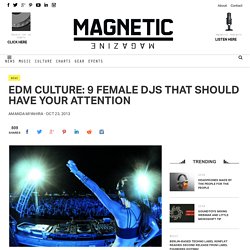 At worst, the genre is a depraved contest of who has the biggest proverbial dick in the industry. But there is one talented group that is often neglected when it comes to music blogs and Top 100 lists--WHERE MY GIRLS AT? MAGNETIC RECOMMENDS:Interview With Sandra Collins From sheer quantity alone, EDM culture may seem like a "boys club", so we wanted to highlight the best emerging female talent in the game. Mind your boners, Gentlemen, these female DJs can show you how it's done. 1.

Maya Jane Coles is an unprecedented talent with a deep understanding of how to make really good music. Check out "Everything" by Maya Jane Coles featuring Karin Park Follow Maya Jane Coles on Facebook | Twitter 2. Tokimonsta is an LA-based DJ and electronic music producer. Check out "Go With It" by Tokimonsta featuring MNDR. Follow Tokimonsta on Facebook | Twitter 3. 4. 5. 7. 8. Trap and Bass - Name as many female trap artists as you can! Why Don't Female EDM Artists Get The Recognition They Deserve? - the Lala. When it comes to the music industry, the attitude towards females can be just as exclusive as it is within the tech industry. 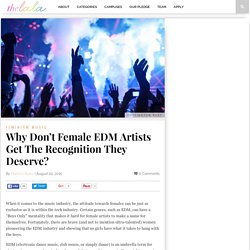 Certain genres, such as EDM, can have a “Boys Only” mentality that makes it hard for female artists to make a name for themselves. Fortunately, there are brave (and not to mention ultra-talented) women pioneering the EDM industry and showing that us girls have what it takes to hang with the boys. EDM (electronic dance music, club music, or simply dance) is an umbrella term for electronic genres such as techno, house, dubstep, and trap music. You might recognize names such as Calvin Harris, Afrojack, Diplo, or Swedish House Mafia — some big commercial acts in EDM. This style of music requires producers and artists to spend long, tedious hours in the studio. This wild fame and fortune is merely a dream for many; it is especially elusive, however, for the hundreds of female EDM vocalists and DJs struggling to get the credit they undoubtedly deserve. 17 Female Famous Music Producers In Bass Music. If you’re keen to learn who the most talented female famous music producers are in the world of bass music, look no further. 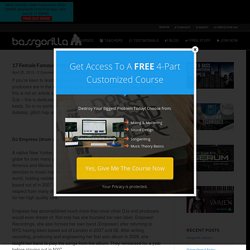 Please note that this is not an article about all females in bass music including vocalists and DJs – this is dedicated to the women who actually produce block rockin’ beats. So in no particular order, here are the top women of drum & bass, dubstep, glitch hop and global bass. DJ Empress (drum and bass, trap, dubstep, electro & metal electro) A native New Yorker, DJ Empress has been smashing clubs around the globe for over many years, from all over Europe to Asia and across North America and Mexico. She’s a veteran DJ, Producer & Vocalist who’s devotion to music has seen her build an esteemed reputation around the world, holding residences in NYC, San Francisco, London (where she was based out of in 2007 and 2008) and Orlando. Get Access To A FREE 4-Part Customized Course Destroy Your Biggest Problem Today!

Mixing & MasteringSound Design Ikonika (dubstep) Sitting Down With Dani Deahl, The Biggest Female Trap Artist in The Game. When it comes to filthy trap music, DANI DEAHL is a rising sensation. 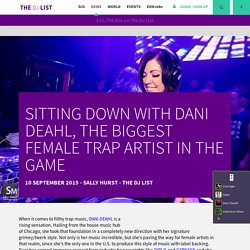 Hailing from the house music hub of Chicago, she took that foundation in a completely new direction with her signature grimey/twerk style. Not only is her music incredible, but she’s paving the way for female artists in that realm, since she’s the only one in the U.S. to produce this style of music with label backing. Dani has earned immense respect from industry heavyweights like DIPLO and CARNAGE and she has worked with powerhouse labels such as Dim Mak, Monstercat, Armada and Flamingo. As if that recognition weren’t enough, both MTV and Mountain Dew have dubbed her one of the industry’s top female producers (which is no surprise after hearing her music). Not only is Dani wildly successful in her music career, she’s also a really, really dope girl. At the moment Dani has a lot going on: a huge release called “SMYK” to go along with her massive ‘Show Me Your Kitties’ Tour currently sweeping through the U.S. 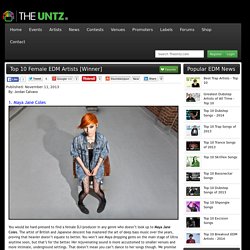 Maya Jane Coles You would be hard-pressed to find a female DJ/producer in any genre who doesn’t look up to Maya Jane Coles. The artist of British and Japanese descent has mastered the art of deep bass music over the years, proving that heavier doesn’t equate to better. You won’t see Maya dropping gems on the main stage of Ultra anytime soon, but that’s for the better. Honorable Mentions: Kito | Natasha Kmeto | Alison Wonderland | Josie Martin (Candyland) | Audrey Napoleon | Rena Jones Previous.