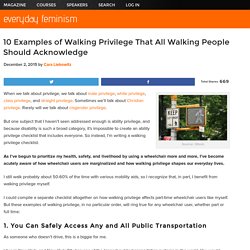 Sometimes we’ll talk about Christian privilege. Rarely will we talk about cisgender privilege. But one subject that I haven’t seen addressed enough is ability privilege, and because disability is such a broad category, it’s impossible to create an ability privilege checklist that includes everyone. So instead, I’m writing a walking privilege checklist. As I’ve begun to prioritize my health, safety, and livelihood by using a wheelchair more and more, I’ve become acutely aware of how wheelchair users are marginalized and how walking privilege shapes our everyday lives.

I still walk probably about 50-60% of the time with various mobility aids, so I recognize that, in part, I benefit from walking privilege myself. I could compile a separate checklist altogether on how walking privilege affects part-time wheelchair users like myself. 1. “But wait!” 2. 3. Washington's Horrible Mental Health Legislation  There is no question that America's mental health care system is in dire need of an overhaul. 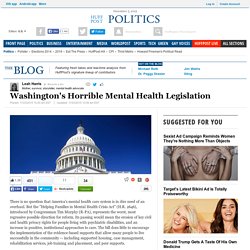 But the "Helping Families in Mental Health Crisis Act" (H.R. 2646), introduced by Congressman Tim Murphy (R-PA), represents the worst, most regressive possible direction for reform. Its passing would mean the erosion of key civil and health privacy rights for people living with psychiatric disabilities, and an increase in punitive, institutional approaches to care.

The bill does little to encourage the implementation of the evidence-based supports that allow many people to live successfully in the community -- including supported housing, case management, rehabilitation services, job training and placement, and peer supports. H.R. 2646 passed out of the Energy and Commerce Health Subcommittee earlier this month after a marathon ten-hour markup process. When People Say I’m Being a Victim for Experiencing My Mental Illness. I have a mental illness. 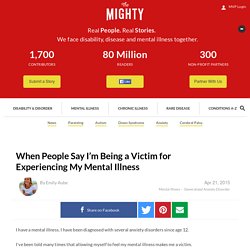 I have been diagnosed with several anxiety disorders since age 12. TEN ACCESS BLUNDERS THAT THE NONDISABLED MAKE. By: Emily Beitiks Well, it happened again. 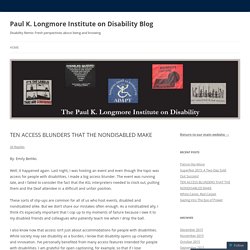 Last night, I was hosting an event and even though the topic was access for people with disabilities, I made a big access blunder. The event was running late, and I failed to consider the fact that the ASL interpreters needed to clock out, putting them and the Deaf attendee in a difficult and unfair position. These sorts of slip-ups are common for all of us who host events, disabled and nondisabled alike. Ableism Online: Virtually Passing While Disabled. Among people in marginalized communities, you’ll often hear talk of “passing.” 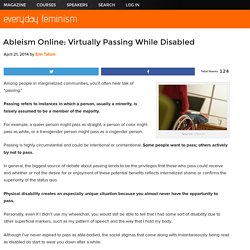 Passing refers to instances in which a person, usually a minority, is falsely assumed to be a member of the majority. For example, a queer person might pass as straight, a person of color might pass as white, or a transgender person might pass as a cisgender person. Passing is highly circumstantial and could be intentional or unintentional. Some people want to pass; others actively try not to pass. In general, the biggest source of debate about passing tends to be the privileges that those who pass could receive and whether or not the desire for or enjoyment of these potential benefits reflects internalized shame or confirms the superiority of the status quo.

Physical disability creates an especially unique situation because you almost never have the opportunity to pass. 5 Things to Do (And Not Do) to Support Someone With Depression. Depression is a drag. 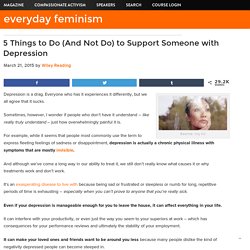 Everyone who has it experiences it differently, but we all agree that it sucks. Sometimes, however, I wonder if people who don’t have it understand – like really truly understand – just how overwhelmingly painful it is. For example, while it seems that people most commonly use the term to express fleeting feelings of sadness or disappointment, depression is actually a chronic physical illness with symptoms that are mostly invisible. And although we’ve come a long way in our ability to treat it, we still don’t really know what causes it or why treatments work and don’t work. It’s an exasperating disease to live with because being sad or frustrated or sleepless or numb for long, repetitive periods of time is exhausting – especially when you can’t prove to anyone that you’re really sick.

Even if your depression is manageable enough for you to leave the house, it can affect everything in your life. In its worst form, depression can lead to death. The Neurotypicals’ Guide to Adults with Sensory Processing Disorder. Originally published on The Body Is Not an Apology and the author’s blog Coming to My Senses and republished here with their permission. 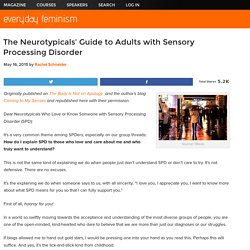 Dear Neurotypicals Who Love or Know Someone with Sensory Processing Disorder (SPD): It’s a very common theme among SPDers, especially on our group threads: How do I explain SPD to those who love and care about me and who truly want to understand? This is not the same kind of explaining we do when people just don’t understand SPD or don’t care to try.

It’s not defensive. There are no excuses. 7 Ways to Actively Support Suicide Attempt Survivors. Content warning: references to suicide and suicide attempts. 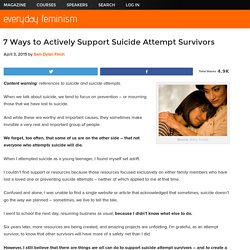 When we talk about suicide, we tend to focus on prevention – or mourning those that we have lost to suicide. And while these are worthy and important causes, they sometimes make invisible a very real and important group of people. We forget, too often, that some of us are on the other side – that not everyone who attempts suicide will die. 9 Affirmations You Deserve to Receive If You Have a Mental Illness. I remember the first time my therapist told me, “Sam, you’re doing a good job.” 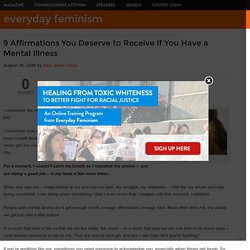