MOOC How to make a comic book

Making Comics Gutter Talk Episode 49 - Eric Shanower - MakingComics.com. As we enter December, the last month of Year One of not just the Gutter Talk podcast but the site as a whole, we pause a little to reflect on just how much we’ve accomplished in that time. 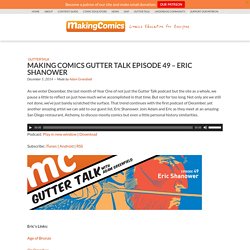 But not for too long. Not only are we still not done, we’ve just barely scratched the surface. That trend continues with the first podcast of December, yet another amazing artist we can add to our guest list, Eric Shanower. Join Adam and Eric as they meet at an amazing San Diego restaurant, Alchemy, to discuss mostly comics but even a little personal history similarities. Podcast: Play in new window | Download. Making Comics Gutter Talk Episode 49 - Eric Shanower - MakingComics.com. Digital Coloring for Comics - GIMP Edition - MakingComics.com. I still remember feeling awe the first time I super-imposed text, with effects, over a picture downloaded from the internet. 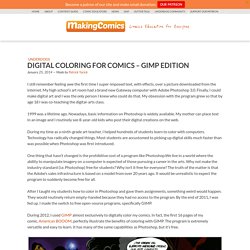 My high school’s art room had a brand new Gateway computer with Adobe Photoshop 3.0. Finally, I could make digital art and I was the only person I knew who could do that. My obsession with the program grew so that by age 18 I was co-teaching the digital-arts class. 1999 was a lifetime ago. Nowadays, basic information on Photoshop is widely available. During my time as a ninth-grade art teacher, I helped hundreds of students learn to color with computers. One thing that hasn’t changed is the prohibitive cost of a program like Photoshop.We live in a world where the ability to manipulate imagery on a computer is expected of those pursuing a career in the arts. After I taught my students how to color in Photoshop and gave them assignments, something weird would happen. During 2012, I used GIMP almost exclusively to digitally color my comics. Daily Challenge - MakingComics.com. Home Page - Drawing Words Writing Pictures. ComixTribe. Lettering Comic Books with Illustrator. 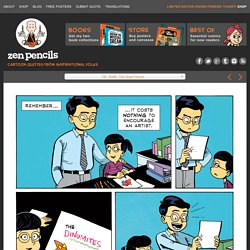 Stanley Kubrick Answers a Question. Neil Gaiman – Make Good Art. Shonda Rhimes – A Screenwriter’s Advice. Ira Glass – Advice for Beginners. John Green – Make Gifts for People. Kevin Smith is a filmmaker, writer, podcast mogul and professional babbler. I was also in peak comic book-collecting form when Smith exploded onto the comics scene, writing the Marvel Knights Daredevil series. Smith was 24 when Clerks was released, which he funded himself for $27,000, using many of his friends as actors and filming it at the convenience store he worked at.

The main thing I enjoy about Smith’s podcasts and gabfests is his encouragement to aspiring artists and creatives. “Don’t be afraid to do weird stuff, so long as you do it cheaply and cover everyone’s bets. "The Humility Of The Artist" by Seth Godin (comic by Patrick Yurick) - MakingComics.com. MakingComics GutterTalk Ep. 19 - Get a Grasp! MOOC Panel. The Get A Grasp! 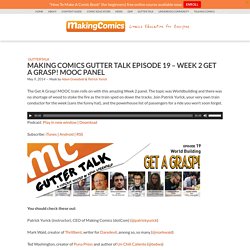 MOOC train rolls on with this amazing Week 2 panel. The topic was Worldbuilding and there was no shortage of wood to stoke the fire as the train sped on down the tracks. Join Patrick Yurick, your very own train conductor for the week (sans the funny hat), and the powerhouse list of passengers for a ride you won’t soon forget. Podcast: Play in new window | Download Subscribe: iTunes | Android | You should check these out: Patrick Yurick (instructor), CEO of Making Comics (dotCom) (@patrickyurick) Mark Waid, creator of Thrillbent, writer for Daredevil, among so, so many (@markwaid) Ted Washington, creator of Puna Press and author of Un Chili Caliente (@tedwa) Bizhan Khodabendah, author of The Little Black Fish (@MendedArrow) And check out Bizhan’s Kickstarter project he’s co-piloting with Making Comics’ very own, Mark Luetke, called OUTDOOR/INDOOR: A New Infinite Canvas Comic System Lee Cherolis, writer of Little Guardians (@LeeCherolis) And these, too: Intro & Outro Song:

GutterTalk Ep. 19 - Get a Grasp! MOOC Panel. Be Friends with Failure. Sources cited! 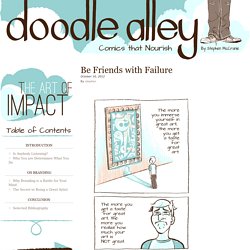 I discovered the baby concept on AJATT.com– a blog devoted to language acquisition. Check it out! Would you like to have this comic as a 18 by 24 inch poster? CLICK HERE! You VS You. Do you find yourself in conflict with yourself? 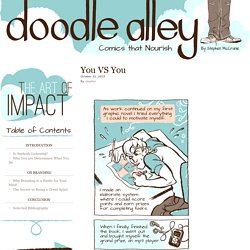 How have you dealt with that? I wrote this essay to make people aware of an important aspect of self motivation– that there are two distinct parts of you involved– the self, and the motivator. Facilitating a healthy relationship with yourself– that is to say, treating yourself with grace and compassion is key to a sustainable and motivated creative practice. GUESS WHAT GUYS! The kickstarter has funded! And of course, if you missed it– here’s the video for the kickstarter below: Brick by Brick. [...] 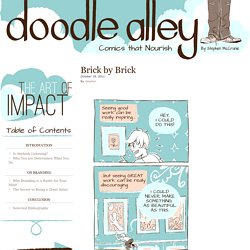 Yep, I'm going to second Ne's comments- sharing our rough times and being raw and personal and honest, that's what these forums are for. If you can't do it here, where can you? This is an online support community– that's what it's for, Accel! So, I'd say there is a difference between sharing raw, tough stuff and "whining like a pansy".