17 Ways You Can Work For Social Justice by Nina Flores. If you're feeling inspired by the Supreme Court's historic same-sex marriage decision, then do your part to help build and sustain forward momentum toward justice for all. 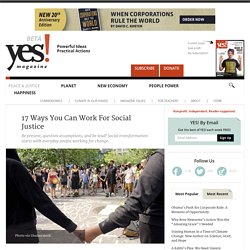 Legalizing same-sex marriage is a huge victory, but it is not the finish line of justice. Inequality takes many forms, and people are still waiting on their ability to live freely, safely, or, just to live. 1. Organize Support community and issue-based organizations. 2. Justice for all can't happen without building solidarity across issues, communities, and movements.

Epidemiologe Wilkinson: "Die Antwort ist simpel: Ungleichheit bringt uns um" - Gesundheitspolitik. The responsibility of privilege. Linguist and political activist Noam Chomsky remains as vigorous as ever at the age of 84. 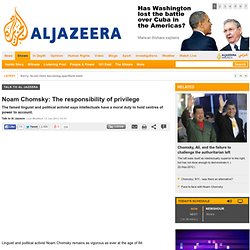 His popularity - or notoriety as some would say - endures because he is still criticising politicians, business leaders and other powerful figures for not acting in the public’s best interest. At the heart of Chomsky’s work is examining the ways elites use their power to control millions of people, and pushing the public to resist. In this episode of Talk to Al Jazeera, Noam Chomsky sits down with Rosiland Jordan to talk about the two main tracks of his life: research and political activism. The Unselfish Gene. The Idea in Brief Executives, like most other people, have long believed that human beings are interested only in advancing their material interests.

However, recent research in evolutionary biology, psychology, sociology, political science, and experimental economics suggests that people behave far less selfishly than most assume. Evolutionary biologists and psychologists have even found neural and, possibly, genetic evidence of a human predisposition to cooperate. These findings suggest that instead of using controls or carrots and sticks to motivate people, companies should use systems that rely on engagement and a sense of common purpose. 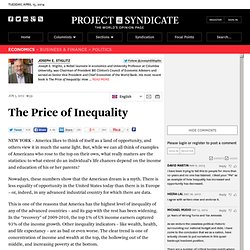 Click to hide this space NEW YORK – America likes to think of itself as a land of opportunity, and others view it in much the same light. But, while we can all think of examples of Americans who rose to the top on their own, what really matters are the statistics: to what extent do an individual’s life chances depend on the income and education of his or her parents? Nowadays, these numbers show that the American dream is a myth. There is less equality of opportunity in the United States today than there is in Europe – or, indeed, in any advanced industrial country for which there are data. This is one of the reasons that America has the highest level of inequality of any of the advanced countries – and its gap with the rest has been widening. Likewise, part of the wealth of those in finance comes from exploiting the poor, through predatory lending and abusive credit-card practices. But growing inequality is not inevitable. Top-Ökonomen: Joseph Stiglitz - Amerikas hoher Preis der Ungleichheit.

How income inequality contributed to the Great Recession. A house in Denver lies empty and under foreclosure as the sub-prime crisis hits the US in 2007. 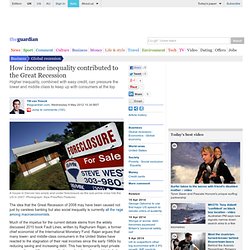 Photograph: Sipa Pres/Rex Features The idea that the Great Recession of 2008 may have been caused not just by careless banking but also social inequality is currently all the rage among macroeconomists. Much of the impetus for the current debate stems from the widely discussed 2010 book Fault Lines, written by Raghuram Rajan, a former chief economist of the International Monetary Fund. Rajan argues that many lower- and middle-class consumers in the United States have reacted to the stagnation of their real incomes since the early 1980s by reducing saving and increasing debt.

This has temporarily kept private consumption and thus aggregate demand and employment high, but also contributed to the creation of the credit bubble which eventually burst. In Rajan's view, a large portion of the blame for this falls on misguided government policies, which promoted the expansion of credit to households. EqualityTrust.

Want to end poverty? Brazil’s answer: Give people money. Here is a brilliant idea for how to help poor people: give them money. 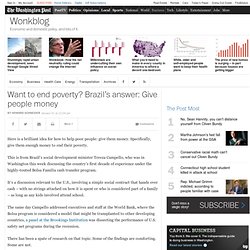 Specifically, give them enough money to end their poverty. This is from Brazil’s social development minister Tereza Campello, who was in Washington this week discussing the country’s first decade of experience under the highly-touted Bolsa Familia cash transfer program. It’s a discussion relevant to the U.S., involving a simple social contract that hands over cash – with no strings attached on how it is spent or who is considered part of a family – as long as any kids involved attend school.

The same day Campello addressed executives and staff at the World Bank, where the Bolsa program is considered a model that might be transplanted to other developing countries, a panel at the Brookings Institution was dissecting the performance of U.S. safety net programs during the recession.