Part 2 – Agile UX: Designing the User Experience in an Agile World - SAP User Experience Community. In part 1 of this article, I summarized the background and basics of agile user experience (UX). 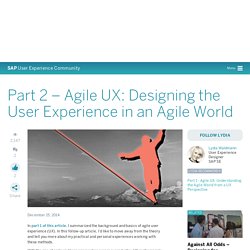 In this follow-up article, I’d like to move away from the theory and tell you more about my practical and personal experiences working with these methods. With the rise of agile and lean approaches across our industry, UX professionals are more likely than ever to find themselves supporting agile projects. Yet, many of us seem stymied by the challenge of effectively integrating UX within an agile development framework. As did I. Six Sigma. The common Six Sigma symbol Six Sigma is a set of techniques and tools for process improvement. 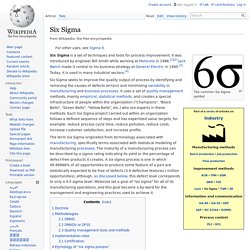 It was introduced by engineer Bill Smith while working at Motorola in 1986.[1][2] Jack Welch made it central to his business strategy at General Electric in 1995.[3] Today, it is used in many industrial sectors.[4] Six Sigma seeks to improve the quality output of process by identifying and removing the causes of defects (errors) and minimizing variability in manufacturing and business processes. It uses a set of quality management methods, mainly empirical, statistical methods, and creates a special infrastructure of people within the organization ("Champions", "Black Belts", "Green Belts", "Yellow Belts", etc.) who are experts in these methods. The term Six Sigma originated from terminology associated with manufacturing, specifically terms associated with statistical modeling of manufacturing processes. 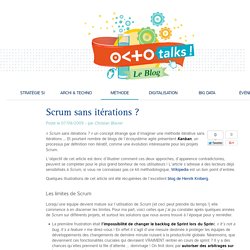 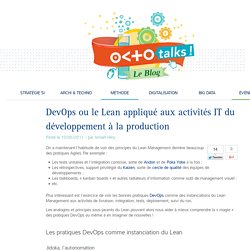 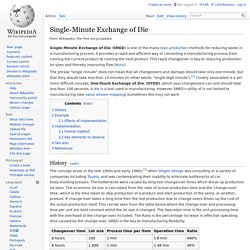 This can be seen from the table below where the change-over and processing time per unit are held constant whilst the lot size is changed. Lean IT. Lean integration. Matrix management. Strictly speaking, matrix management is the practice of managing individuals with more than one reporting line (in a matrix organization structure), but it is also commonly used to describe managing cross functional, cross business group and other forms of working that cross the traditional vertical business units – often silos - of function and geography. 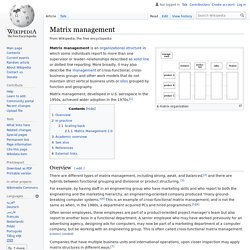 What is it? [edit] It is a type of organizational structure in which people with similar skills are pooled for work assignments, resulting in more than one manager (sometimes referred to as solid line and dotted line reports, in reference to traditional business organization charts). For example, all engineers may be in one engineering department and report to an engineering manager, but these same engineers may be assigned to different projects and report to a different engineering manager or a project manager while working on that project.

Therefore, each engineer may have to work under several managers to get his or her job done. R. Kanban (development) This article is about the process management and improvement method. 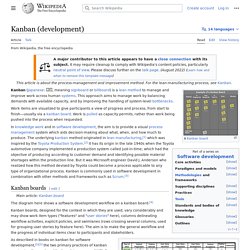 For the lean manufacturing process, see Kanban. Kanban is a method for managing knowledge work with an emphasis on just-in-time delivery while not overloading the team members. In this approach, the process, from definition of a task to its delivery to the customer, is displayed for participants to see. Scrum (software development) Agile software development framework Many of the terms used in Scrum are typically written with leading capitals (e.g., Scrum Master, Daily Scrum). 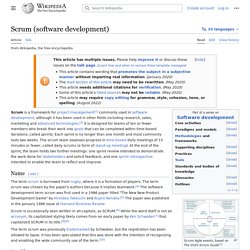 However, to maintain an encyclopedic tone, this article uses normal sentence case for these terms (e.g., scrum master, daily scrum) – unless they are recognized marks (such as Certified Scrum Master and Professional Scrum Master). As such, Scrum adopts an evidence-based empirical approach – accepting that the problem cannot be fully understood or defined up front, and instead focusing on how to maximize the team's ability to deliver quickly, to respond to emerging requirements, and to adapt to evolving technologies and changes in market conditions. The Scrum framework was based on research by Schwaber with Tunde Babatunde at DuPont Research Station and University of Delaware. Lean software development. Lean software development (LSD) is a translation of lean manufacturing and lean IT principles and practices to the software development domain. 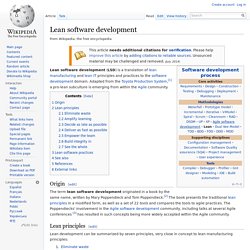 Adapted from the Toyota Production System,[1] a pro-lean subculture is emerging from within the Agile community. Origin[edit] The term lean software development originated in a book by the same name, written by Mary Poppendieck and Tom Poppendieck.[2] The book presents the traditional lean principles in a modified form, as well as a set of 22 tools and compares the tools to agile practices.