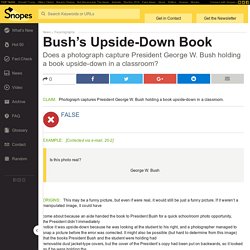 Bush holding a book upside-down in a classroom. Example: [Collected via e-mail, 20-2] Is this photo real? Origins: This may be a funny picture, but even if were real, it would still be just a funny picture. File:OJ Simpson Newsweek TIME.jpg - Wikipedia. Mashable. Fake Hurricane Sandy photos flew around Twitter and Facebook on Monday, as users shared jaw-dropping images. 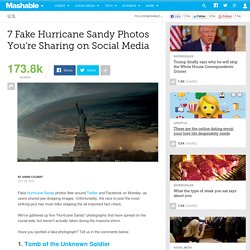 Unfortunately, the race to post the most striking pics has most folks skipping the all-important fact check. We've gathered up five "Hurricane Sandy" photographs that have spread on the social web, but weren't actually taken during the massive storm. Have you spotted a fake photograph? Tell us in the comments below. 1.