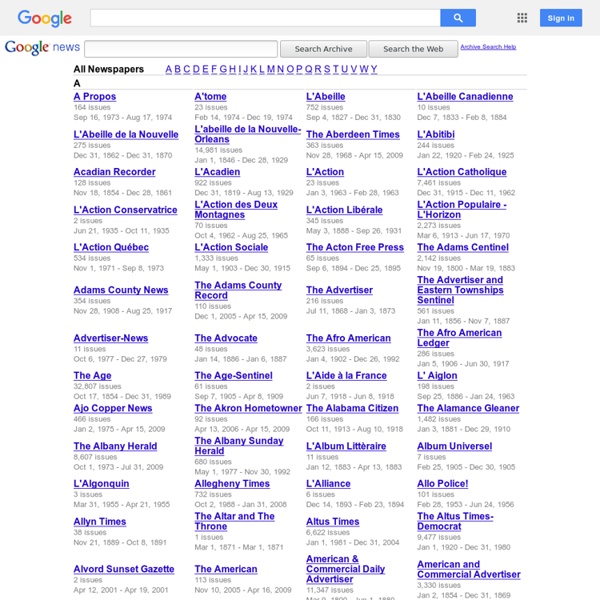 Papua New Guinea Patrol Reports Reports from government patrols are a major source of primary information on Papua New Guinea’s colonial-era history. Patrol officers and other officials wrote detailed documents reporting on all aspects of the work carried out by the patrols. The reports give first-hand accounts on many topics, from first contact with remote Highland villages, to census counts, tax collection, health care, justice, labor recruiting, plantations, missionaries, anthropological descriptions, tribal warfare, languages, and more. The reports in this collection date primarily from the post-World War II era of Papua New Guinea, up through 1975, when PNG gained independence from Australia; a few pre-War reports are also included.

How To Search GenealogyBank Newspaper Records Websites now make it easy to search through millions of old newspaper pages. GenealogyBank has one of the largest collections of digitized US newspapers: more than 7,000 titles from all 50 states, dating from 1690 to the present. They’re in two collections: Refine web searches - Google Search Help You can use symbols or words in your search to make your search results more precise. Google Search usually ignores punctuation that isn’t part of a search operator. Don’t put spaces between the symbol or word and your search term. A search for site:nytimes.com will work, but site: nytimes.com won’t. Refine image searches Overall Advanced Search

Creative Warm-Up: the Industrial Revolution After a few days of studying the Industrial Revolution, I gave students a warm-up activity to get them using primary sources creatively and putting themselves into that time period. In this activity, students were given a sheet containing two primary sources. There were several different sheets, and students could trade with their neighbors if they didn’t like the one they received. They contained photographs, quotes or maps from the period. They were then asked to write between a half a page and a page in the first person about what life would be like for the people the photo, quote or map describe. They were encouraged to combine the information from the two sources they received.

About The Library of Congress Yes. We really are THE Library of Congress. We invited your tags and comments and you responded. Wow, did you respond! Thank You. Grondahl: Russian hackers no match for digital archivist When a ransomware cryptovirus that originated in Russia struck the Fulton History newspaper website Sept. 7 in Oswego County, it caused one of the world's most extensive newspaper digitization projects, more than 44 million pages worth, to crash. In an instant, Tom Tryniski's astonishing accomplishment — homegrown and hand-built across 20 years of relentless toil and an investment of tens of thousands of dollars – seemed to have been obliterated by rogue hackers. It was a vicious attack that locked up with sophisticated encryption all his hard drives containing more than 50 terabytes of data. He anticipated an ultimatum by the hackers: Pay a hefty ransom or watch his passion project get destroyed. There was one hitch. The hackers did not realize who they were up against: a 69-year-old self-taught computer expert and retired IT engineer.