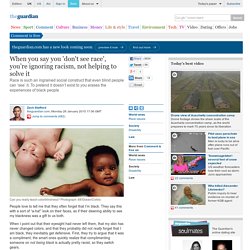 They say this with a sort of “a-ha!” Look on their faces, as if their dawning ability to see my blackness was a gift to us both. When I point out that their eyesight had never left them, that my skin has never changed colors, and that they probably did not really forget that I am black, they inevitably get defensive. First, they try to argue that it was a compliment; the smart ones quickly realize that complimenting someone on not being black is actually pretty racist, so they switch gears.

I don’t see race! This ideology is very popular – like a racial utopic version of the Golden Rule – but it’s actually quite racist. Still, the idea of “colorblindness” is incredibly popular, especially with young people who believe racism is a problem for the older generation and will soon die out. But that ideology does present a very interesting question: If you were truly unable to see people’s skin color, could you still be racist?

Los Angeles school suspensions drop as students talk out their problems. LOS ANGELES — Two times in the last three years, Marcquees Banks has been taken out of class for getting into fights. 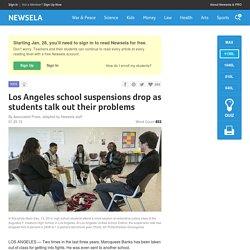 He was even sent to another school. The third time he got into a scuffle, something different happened: A counselor at Augustus Hawkins High School in South Los Angeles pulled Banks and the other teen aside and told them they needed to talk. With the teens seated face to face, Joseph Luciani asked them to explain why they had fought and how they felt. Restorative Justice Policy The school's new approach to discipline, which is known as restorative justice, is catching on in other school districts as well.

"I realized we had a lot of similarities," said Banks, 17, talking of the student he had been fighting with. At Los Angeles Unified School District, the nation's second largest, the shift has been major. Freddie mercury. SocialJustice. BOOKS - Cracking the Teenage Code. Stupidity and Tears: Essays on Teaching and Learning Under Pressure. 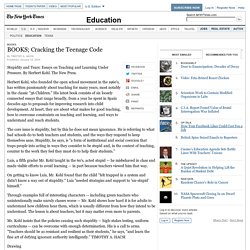 By Herbert Kohl. The New Press. Herbert Kohl, who founded the open school movement in the 1960's, has written passionately about teaching for many years, most notably in the classic ''36 Children.'' His latest book consists of six loosely connected essays that range broadly, from a year he spent in Spain decades ago to proposals for improving research into child development. At heart, they are about what makes for good teaching, how to overcome constraints on teaching and learning, and ways to understand and reach students. The core issue is stupidity, but by this he does not mean ignorance.

Luis, a fifth grader Mr. On getting to know Luis, Mr. Through examples full of interesting characters -- including green teachers who unintentionally make unruly classes worse -- Mr. Mr. Drawing. Critical pedagogy. Educational Leadership:What Schools Can Do About What Students Don't Know. Author of Essay in Standardized Test Can't Answer The Questions - I Speak of Dreams. In 2014, Students Around The Country Stood Up For Their Beliefs. Students around the country have clearly been paying attention in civics class. 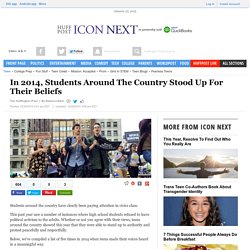 This past year saw a number of instances where high school students refused to leave political activism to the adults. Whether or not you agree with their views, teens around the country showed this year that they were able to stand up to authority and protest peacefully and respectfully. Below, we've compiled a list of five times in 2014 when teens made their voices heard in a meaningful way. 1. Protests for Michael Brown Demonstrations broke out around the country in November after a grand jury decided not to indict Darren Wilson, the police officer who shot and killed 18-year-old Michael Brown in Ferguson, Missouri, this summer. Below are photos of some of the protests. Brookline, Massachusetts.

Mister Rogers defending PBS to the US Senate. Jennifer Niven's top 10 teen books to save your life. What I love most about books is they remind us we’re not alone. 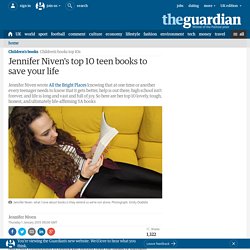 When I was an only child transplanted to landlocked Indiana from the shores of southern Maryland in the United States – a torture akin to, say, moving to Mars – I discovered Judy Blume. In Maryland, I had danced and painted and written stories. I didn’t play team sports and I wasn’t blond and petite and a cheerleader like the girls at my Indiana school.

I never learned to cartwheel because I didn’t like being upside down. Judy Blume’s characters, more than my own parents, knew how I felt, what I thought, what I feared. Books reach into the darkest, loneliest parts of us and remind us it’s okay. Here are ten lovely, tough, honest, and ultimately life-affirming books: 1. Jude and Noah are twins. 2. This classic, first published in 1967, is the bestselling young adult book of all time. 3. When we first meet Troy Billings, he is standing on the edge of a New York City subway platform contemplating suicide.