Informed Comment: Thoughts on the Middle East, History and Religion 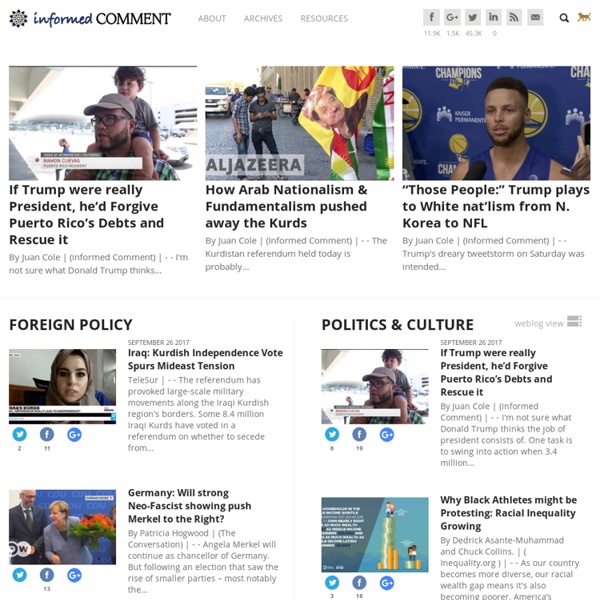 How PIPA and SOPA Violate White House Principles Supporting Free Speech and Innovation Over the weekend, the Obama administration issued a potentially game-changing statement on the blacklist bills, saying it would oppose PIPA and SOPA as written, and drew an important line in the sand by emphasizing that it “will not support” any bill “that reduces freedom of expression, increases cybersecurity risk, or undermines the dynamic, innovative global Internet." Yet, the fight is still far from over. Even though the New York Times reported that the White House statement "all but kill[s] current versions of the legislation," the Senate is still poised to bring PIPA to the floor next week, and we can expect SOPA proponents in the House to try to revive the legislation—unless they get the message that these initiatives must stop, now. So let’s take a look at the dangerous provisions in the blacklist bills that would violate the White House’s own principles by damaging free speech, Internet security, and online innovation: The Anti-Circumvention Provision The “Vigilante” Provision

U.S. Reduces Troops Involved in Joint Military Exercise with Israel Seven months ago, Israel and the U.S. postponed a massive joint military exercise that was originally set to go forward just as concerns were brimming that Israel would launch a strike on Iran’s nuclear facilities. The exercise was rescheduled for late October and appears likely to go forward on the cusp of the U.S. presidential election. But it won’t be nearly the same exercise. Well-placed sources in both countries have told TIME that Washington has greatly reduced the scale of U.S. participation, slashing by more than two-thirds the number of American troops going to Israel and reducing both the number and potency of missile-interception systems at the core of the joint exercise.

Juan Cole, Contributor Juan Coleby Mr. Fish Juan R.I. Cole is the Richard P. Mitchell Collegiate Professor of History at the University of Michigan. He has written extensively on modern Islamic movements in Egypt, the Persian Gulf and South Asia and has given numerous media interviews on the war on terrorism and the Iraq War. Controversial Copyright Bills Would Violate First Amendment–Letters to Congress by Laurence Tribe and Me « Marvin Ammori Today, both Professor Laurence Tribe and I submitted letters and legal memoranda to Congress explaining that proposed copyright legislation would violate the First Amendment and be struck down in court. (His letter is available here, and mine is available here.) Who Else Opposes the Bills?

Mofaz slams Netanyahu's Iran saber rattling "You are headed for a rash confrontation at an unnecessary cost while abandoning the home front," opposition leader Kadima chairman Shaul Mofaz said at the Knesset dais, in response to remarks by Prime Minister Benjamin Netanyahu and talk about an attack on Iran. "Over the past few months, Israel has waged an extensive and relentless PR campaign with the sole objective of preparing the ground for a premature military adventure." Mofaz continued, "This PR campaign has deeply penetrated the 'zone of immunity' of our national security, threatens to weaken our deterrence, and our relations with our best friends. Mr. prime minister, you want a crude, rude, unprecedented, reckless, and risky intervention in the US elections. Tell us who you serve and for what?

Meet Professor Juan Cole, Consultant to the CIA Juan Cole is a brand name that is no longer trusted. And that has been the case for some time for the Professor from Michigan. After warning of the “difficulties” with the Iraq War, Cole swung over to ply it with burning kisses on the day of the U.S. invasion of Iraq. His fervor was not based on Saddam Hussein’s fictional possession of weapons of mass destruction but on the virtues of “humanitarian imperialism.” Thus on March 19, 2003, as the imperial invasion commenced, Cole enthused on his blog: “I remain (Emphasis mine.) convinced that, for all the concerns one might have about the aftermath, the removal of Saddam Hussein and the murderous Baath regime from power will be worth the sacrifices that are about to be made on all sides.”

The Definitive Post On Why SOPA And Protect IP Are Bad, Bad Ideas There's been plenty of talk (and a ton of posts here on Techdirt) discussing both SOPA (originally E-PARASITE) and PROTECT IP (aka PIPA), but it seemed like it would be useful to create a single, "definitive" post to highlight why both of these bills are extremely problematic and won't do much (if anything) to deal with the issues they're supposed to deal with, but will have massive unintended consequences. I also think it's important to highlight how PIPA is almost as bad as SOPA. Tragically, because SOPA was so bad, some in the entertainment industry have seen it as an opportunity to present PIPA as a "compromise." It is not. Both bills have tremendous problems, and they start with the fact that neither bill will help deal with the actual issues being raised. That main issue, we're told over and over again, is "piracy" and specifically "rogue" websites.