Do Inmates Have Rights? If So, What Are They? A person's rights while imprisoned vary slightly depending on where they are incarcerated and at what stage of the criminal process their case may be. 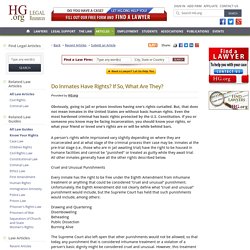 Inmates at the pre-trial stage (i.e., those who are in jail awaiting trial) have the right to be housed in humane facilities and cannot be "punished" or treated as guilty while they await trial. All other inmates generally have all the other rights described below. Cruel and Unusual Punishments Every inmate has the right to be free under the Eighth Amendment from inhumane treatment or anything that could be considered “cruel and unusual” punishment. Unfortunately, the Eighth Amendment did not clearly define what “cruel and unusual” punishment would include, but the Supreme Court has held that such punishments would include, among others:

Ethical Dilemmas In Prison And Jail Health Care. Editor’s note: This post is published in conjunction with the March issue of Health Affairs, which features a cluster of articles on jails and health. 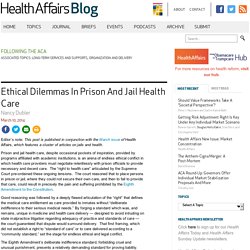 Prison and jail health care, despite occasional pockets of inspiration, provided by programs affiliated with academic institutions, is an arena of endless ethical conflict in which health care providers must negotiate relentlessly with prison officials to provide necessary and decent care. The “right to health care” articulated by the Supreme Court pre-ordained these ongoing tensions. The court reasoned that to place persons in prison or jail, where they could not secure their own care, and then to fail to provide that care, could result in precisely the pain and suffering prohibited by the Eighth Amendment to the Constitution. Good reasoning was followed by a deeply flawed articulation of the “right” that defines the medical care entitlement as care provided to inmates without “deliberate indifference to their serious medical needs.”

The Health and Health Care of US Prisoners: Results of a Nationwide Survey. Bureau of Justice Statistics Medical Problems of Prisoners. Laura M. 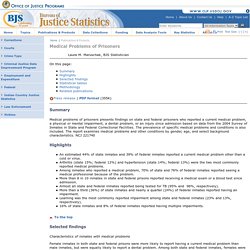 Maruschak, BJS Statistician On this page: Press release | PDF format (355K) Summary Medical problems of prisoners presents findings on state and federal prisoners who reported a current medical problem, a physical or mental impairment, a dental problem, or an injury since admission based on data from the 2004 Survey of Inmates in State and Federal Correctional Facilities. Highlights An estimated 44% of state inmates and 39% of federal inmates reported a current medical problem other than a cold or virus.

To the top Selected findings Characteristics of inmates with medical problems Female inmates in both state and federal prisons were more likely to report having a current medical problem than male inmates, but were equally likely to report a dental problem. Characteristics of inmates with impairments. Object moved. Browse Search Tips A-Z: Click on a letter to limit results to entries beginning with the selected letter. 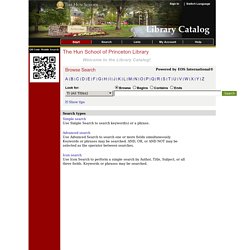 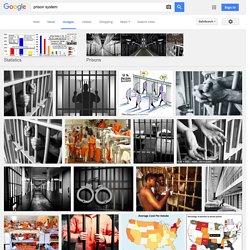 FAQs - Questions about Charges, Sentencing and Prison. Examining Two Fundamental Ethical Issues in U.S. Corrections. As 2013 draws to a close and we consider the year in corrections, issues like budgets and healthcare have been the main concerns for correctional administrators and staffs across the country. 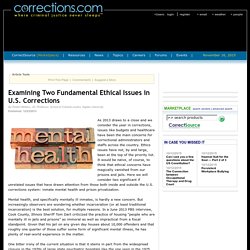 Ethics issues have not, by and large, been at the top of the priority list. It would be naïve, of course, to think that ethical concerns have magically vanished from our prisons and jails. Here we will consider two significant if unrelated issues that have drawn attention from those both inside and outside the U.S. corrections system: inmate mental health and prison privatization.

Mental health, and specifically mentally ill inmates, is hardly a new concern. But increasingly observers are wondering whether incarceration (or at least traditional incarceration) is the best solution, for multiple reasons. The problem arose when no system to replace them was created at the local level. One model program is Washington, D.C. The new year is likely to bring new challenges on all fronts. About the author: Justice Department set to free 6,000 prisoners, largest one-time release. The Justice Department is set to release about 6,000 inmates early from prison — the largest one-time release of federal prisoners — in an effort to reduce overcrowding and provide relief to drug offenders who received harsh sentences over the past three decades, according to U.S. officials. 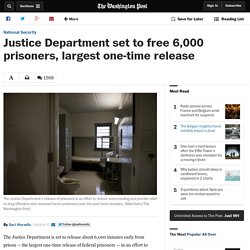 The inmates from federal prisons nationwide will be set free by the department’s Bureau of Prisons between Oct. 30 and Nov. 2. About two-thirds of them will go to halfway houses and home confinement before being put on supervised release. About one-third are foreign citizens who will be quickly deported, officials said. The early releases follow action by the U.S. Sentencing Commission — an independent agency that sets sentencing policies for federal crimes — that reduced the potential punishment for future drug offenders last year and then made that change retroactive. CQ Press Library. Prison Health Care: CQR. 212621. Prison System.