Detox: How Fashion Is Cleaning Up Its Act. Find out how many vegans are in Great Britain. There are over half a million vegans in Britain - at least 1.05% of the 15 and over population* - new research commissioned by The Vegan Society in partnership with Vegan Life magazine, has found. 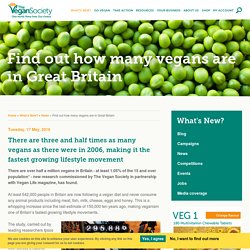 At least 542,000 people in Britain are now following a vegan diet and never consume any animal products including meat, fish, milk, cheese, eggs and honey. This is a whopping increase since the last estimate of 150,000 ten years ago, making veganism one of Britain’s fastest growing lifestyle movements. The study, carried out by leading researchers Ipsos MORI, surveyed almost 10,000 people aged 15 or over across England, Scotland and Wales – the biggest ever poll quantifying the vegan community. “To have over half a million vegans in Britain is fantastic. The results make encouraging reading for those who care about animals and the planet. The study also found that 3.25% of the population, around 1.68 million people, are either vegetarian or vegan. Vegan - Explore - Google Trends.

Ethical Christmas Gift Ideas 2016. 2016: The Biggest Ever Year for Vegans? Consumer-Goods' Brands That Demonstrate Commitment to Sustainability Outperform Those That Don’t. 66% of Global Consumers Say They’re Willing to Pay More for Sustainable Brands—Up 55% From 2014. 73% of Global Millennials Are Willing to Pay Extra for Sustainable Offerings—Up From 50% in 2014 New York – Oct. 12, 2015 – Committing to sustainability might just pay off for consumer brands, according to the 2015 Nielsen Global Corporate Sustainability Report. 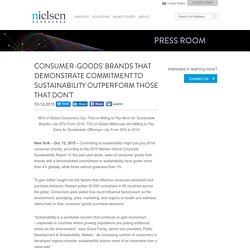 In the past year alone, sales of consumer goods from brands with a demonstrated commitment to sustainability have grown more than 4% globally, while those without grew less than 1%. To gain better insight into the factors that influence consumer sentiment and purchase behavior, Nielsen polled 30,000 consumers in 60 countries across the globe. Consumers were asked how much influence factors such as the environment, packaging, price, marketing, and organic or health and wellness claims had on their consumer-goods’ purchase decisions.

“Consumer brands that haven’t embraced sustainability are at risk on many fronts,” says Gstalder. OpenLabel. Be An Unfucker. How to Engage with Ethical Fashion. Clothing Knowledge Hub. The Centre for Sustainable Fashion provokes, challenges and questions the fashion status quo. Through collaboration we design transforming solutions that. The TEN « Textiles Environment Design. The TEN. 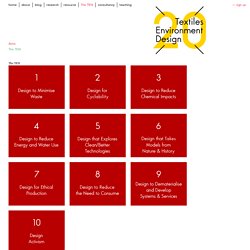 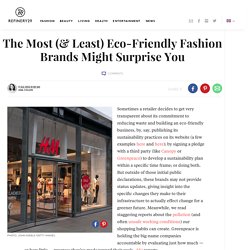 Sometimes a retailer decides to get very transparent about its commitment to reducing waste and building an eco-friendly business, by, say, publishing its sustainability practices on its website (a few examples here and here); by signing a pledge with a third party (like Canopy or Greenpeace) to develop a sustainability plan within a specific time frame; or doing both. But outside of those initial public declarations, these brands may not provide status updates, giving insight into the specific changes they make to their infrastructure to actually effect change for a greener future. Stella McCartney Canopy Style Fashion Sustainability. Stella McCartney has long distinguished herself in the luxury fashion space for building a proudly ethical company. 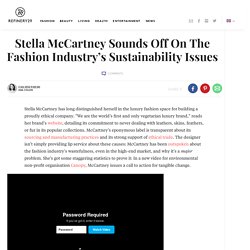 The environmental cost of your online shopping habit. It won't come as a huge surprise that fashion and beauty sales account for a significant proportion of the multi-billion dollar online shopping industry. 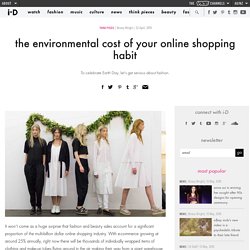 With e-commerce growing at around 25% annually, right now there will be thousands of individually wrapped items of clothing and make-up tubes flying around in the air making their way from a giant warehouse to the home of whoever happened to log onto the internet and click 'buy now'. Earth Day - AG Jeans, Ethical Shopping, Eco Friendly. Photo: Courtesy of AG Jeans. 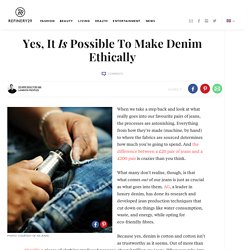 When we take a step back and look at what really goes into our favourite pairs of jeans, the processes are astonishing. Everything from how they're made (machine, by hand) to where the fabrics are sourced determines how much you're going to spend. And the difference between a £20 pair of jeans and a £200 pair is crazier than you think. What many don't realise, though, is that what comes out of our jeans is just as crucial as what goes into them. Sustainable or Superficial? M.I.A stars in "Rewear It," the campaign video for H&M's World Recycle Week 2016 | Source: H&M LONDON, United Kingdom — April 24 marks three years since one of the world’s worst industrial disasters, when 1,134 people — predominantly female garment workers — lost their lives in the collapse of the Rana Paza complex in the Savar region of Dhaka, Bangladesh. 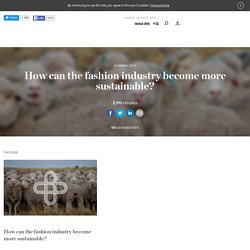 As we edge toward that grim anniversary, the question I keep being asked is: “What has changed?” I wish I had a better answer than “not much.” I suspect what most of us mean by that question is “Which brands are now sufficiently clean for me to buy without feeling guilty?” Taking a week off social media can make you happier. Pencil & Chalk Illustrations Depicting My Humiliation At Being The Only Species That Destroys Earth. This is a series of illustrations I created using mostly prismacolor pencils and a little chalk pastel with some acrylic paint. 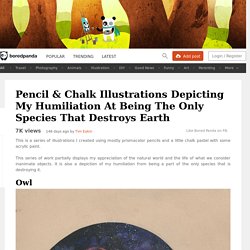 This series of work partially displays my appreciation of the natural world and the life of what we consider inanimate objects. It is also a depiction of my humiliation from being a part of the only species that is destroying it. Owl Prismacolor on stonehenge paper. Save the Bees. Burning all fossil fuels will melt entire Antarctic ice-sheet, study shows. Burning all the world’s coal, oil and gas would melt the entire Antarctic ice-sheet and cause the oceans to rise by over 50m, a transformation unprecedented in human history. 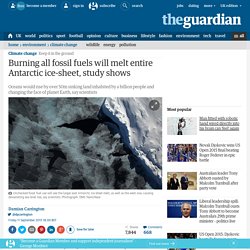 The conclusion of a new scientific study shows that, over the course of centuries, land currently inhabited by a billion people would be lost below water. Fashion Week hits New York, but what about the industry's toll on workers and the environment? A few years ago I was sitting at a meeting discussing the state of “ethical fashion” with a group of very influential fashionistas. One of them scornfully commented, scrunching up her Botox-injected face, “Oh, but this saving the planet thing is so worthy.” Help refugees in calais out with your old kicks. No doubt you will have seen images and heard stories about the appalling conditions faced by refugees and migrants currently living in an encampment dubbed 'The Jungle' close to the French port, and Eurostar train station, just across the English Channel in Calais.

The issues faced by this vulnerable population can seem overwhelming, with global politicians scrambling to put new policies together whilst the death toll climbs, and David Cameron callously describing these human beings, who happen to be in a desperate situation, as a "swarm" as if they're some kind of insect pest. But there are some very simple things you can do to make life more bearable for the people living in the camp. i-D was contacted by French non-profit organisation The Auberge des Migrants with one simple request: please send trainers. In particular men's trainers and walking shoes/boots, as the men in the camp face long walks each day from the camp to the centre to apply for asylum, and back again. #helpCalais. 20 clothing hacks that will save you a fortune. Recycled, 'sustainable' swimwear is a hot new fashion trend. The fashion industry has been criticized for how it produces clothing quickly and cheaply.

And the category of swimwear is no different — tags in bathing suits typically say “made in China,” or Thailand, or Vietnam — countries known for using sweatshop labor. But as the ethical and sustainable fashion movements gain steam, many startups are producing swimwear in nontraditional ways– sweatshop free and using what they say are more ecologically sound materials. Even a legacy brand as massive as Speedo is beginning to sell sustainable swimwear made from recycled materials. Plastic bag use down 71% since 5p charge was introduced - BBC News. Image copyright Getty Images The number of single-use carrier bags handed out by shops in Wales has fallen by 71% since charges were introduced in 2011, according to a report.

The review, for Welsh ministers, estimates between £17m and £22m raised by the 5p charge has been donated to good causes by retailers. Natural Resources Minister Carl Sargeant said the levy had produced a significant shift in consumer habits. Carrier bag charges begin in England next month, for large retailers only. India bars Greenpeace unit from receiving foreign funds - BBC News. Image copyright AP India has cancelled a licence allowing Greenpeace's local unit to receive donations from abroad, the environmental group says. Greenpeace called it "another attempt to silence criticism". In April, the government blocked the group's bank accounts, accusing it of violating tax laws and working against India's economic interests. 99% Of All Seabird Species Will Likely Be Eating Plastic By 2050. We’ve known for at least half a century that plastic debris in the ocean poses risks to wildlife. And now, according to researchers modeling debris exposure, 99% of all seabird species are likely to ingest plastic by 2050.

The findings were published in Proceedings of the National Academy of Sciences this week. I Capture The Beauty Of Abandoned Places Before Nature Reclaims Them Forever. H&M Debuts New Denim Styles Made From Recycled Garments. A better way of doing it could be a game changer for the industry. Planet fashion: on how consumers demand ethics to match their aesthetics. Few things can bring on dismissive eye-rolling in a sophisticated consumer like a luxury-goods giant talking about social responsibility and sustainable production. 20+ Shocking Photos Showing How Bad Pollution In China Has Become. China has some stunningly beautiful natural landscapes, but they may not count for much when, in other parts of the country, pollution runs totally unchecked.

These shocking photos show what severe pollution people have to deal with in some parts of China. Beijing and other parts of China have already become notorious for their incessant clouds of smog, which present very real health risks to anyone not wearing dust masks. Unregulated dumping in various rivers throughout China is fairly common, as many of the photos in this series help illustrate. Chinese leaders have vowed to get serious on air pollution, but change will be difficult in a country whose industry has expanded so rapidly.

Diy Waste Fabric Curtain That Can Become A Dress. Grow Your Own Microbial "Leather" in Your Kitchen (DIY Tutorial) Photos from The Next Black. H&M Launches €1 Million Prize to Promote Recycling. Adidas, Parley Create World's First Sneakers Made From Ocean Trash. Queensland kills 621 sharks in a year under protection program. 21+ Brilliant DIY Ideas How To Recycle Your Old CD’s. Air pollution in China is killing 4,000 people every day, a new study finds. Humans have already used up 2015's supply of Earth's resources – analysis. Capsule Wardrobe — The Note Passer.