Most Popular and Featured Picks

Postcards from Mars show rover's key science targets. The InMail That Landed Me a Book Deal. Ever since my book, Found in Translation, came out this past October, people have been asking me how I landed a major publisher. 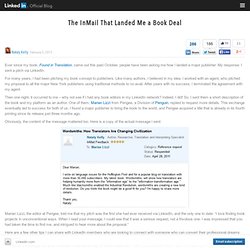 My response: I sent a pitch via LinkedIn. On Purpose Magazine Stories Trending High on Trendspottr.com. Getting sites with decent link authority is not always easy, but it is important when you are trying to build traffic and credibility so I was checking my out links back to my site and found that I was not only on www.trendspottr.com but also that two of my stories were trending number 3 and 5. 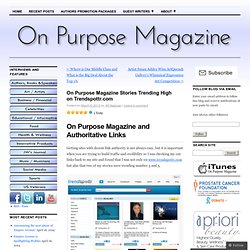 I highlighted the two stories on Trendspottr in yellow. Wow! Not to shabby. Our traffic here at On Purpose Magazine is growing month over month steadily and we are getting better and better interviews and stories to share with you. We are announcing formally our partnership with www.ArtQuench.com an Art Gallery and Online Magazine to add to our already cool content… Tell your friends and help us grow more. Inis’ World Top 20 most inspiring women. The Curfew.

Why does vinegar dissolve pearls. First-century historian Pliny popularized the idea of vinegar "melting" a pearl when he told the tale of Cleopatra dropping a large, expensive pearl earring into a goblet of wine vinegar to win a bet with Mark Antony. 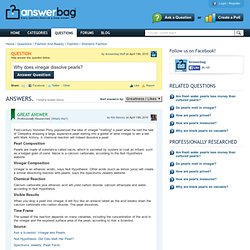 A chemical reaction will indeed dissolve a pearl. Pearl Composition Pearls are made of substance called nacre, which is secreted by oysters to coat an irritant, such as a lodged grain of sand. Nacre is a calcium carbonate, according to the Null Hypothesis website. Great Pyramids of Giza in Egypt. 'Leap second' adds extra moment for first time since 2008. CTVNews.ca Staff Published Friday, Jun. 29, 2012 11:01AM EDT Last Updated Friday, Jun. 29, 2012 10:44PM EDT The Canada Day long weekend just got a little longer – only by one second unfortunately. 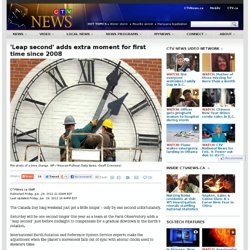 Saturday will be one second longer this year as a team at the Paris Observatory adds a “leap second” just before midnight to compensate for a gradual slowdown in the Earth’s rotation. International Earth Rotation and Reference System Service experts make the adjustment when the planet’s movement falls out of sync with atomic clocks used to measure time. A total of 24 seconds have been added to atomic clocks since 1972.

But that doesn’t mean that days are 24 seconds longer, only that the days on which the leap second are added have 86,401 instead of the usual 86,400 seconds. A second can be added or removed as needed every six months, but it typically happens only every 1.5 years. Who's Who scam. A Who's Who scam is a fraudulent Who's Who biographical directory.[1] While there are many legitimate Who's Who directories, Who's Who scams involve the selling of "memberships" in fraudulent directories that are created online or through instant publishing services.[1] These fraudulent directories represent thinly veiled moneymaking scams. 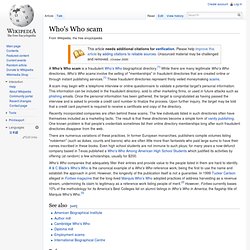 A scam may begin with a telephone interview or online questionnaire to validate a potential target's personal information. This information can be included in the fraudulent directory, sold to other marketing firms, or used in future attacks such as phishing emails. Once the personal information has been gathered, the target is congratulated as having passed the interview and is asked to provide a credit card number to finalize the process.

Upon further inquiry, the target may be told that a credit card payment is required to receive a certificate and copy of the directory. Recently incorporated companies are often behind these scams. See also[edit] International Who's Who. WorldWide Telescope. The Scale of the Universe. The Scale of the Universe 2. Amazing picture of the southern lights as seen from the International Space Station. Brain scans support findings that IQ can rise or fall significantly during adolescence. IQ, the standard measure of intelligence, can increase or fall significantly during our teenage years, according to research funded by the Wellcome Trust, and these changes are associated with changes to the structure of our brains. 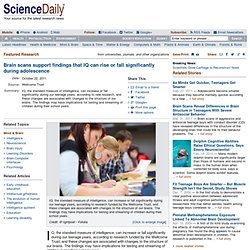 The findings may have implications for testing and streaming of children during their school years. Across our lifetime, our intellectual ability is considered to be stable, with intelligence quotient (IQ) scores taken at one point in time used to predict educational achievement and employment prospects later in life. However, in a study published October 20 in the journal Nature, researchers at the Wellcome Trust Centre for Neuroimaging at UCL (University College London) and the Centre for Educational Neuroscience show for the first time that, in fact, our IQ is not constant.

The researchers, led by Professor Cathy Price, tested 33 healthy adolescents in 2004 when they were between the ages of 12 and 16 years. Talented Actress needs a hand up by Actress Heather Ogden Brooks. USTREAM, You're On. Free LIVE VIDEO Streaming, Online Broadcasts. Create webcasts, live stream videos on the Internet. Live streaming videos, TV shows.

Vimeo, Video Sharing For You. A.A. Milne Quotes (Author of Winnie-the-Pooh) Sharon Lechter on Napoleon Hill and Outwitting The Devil. Co-Author of one of the longest number one best sellers ever; Rich Dad Poor Dad and author or co-author of 19 other books mainly about personal finance and investing sat down with me to talk about her newest project. 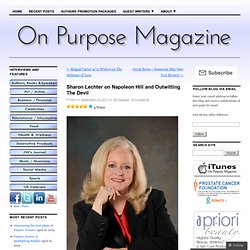