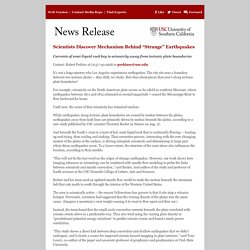 The city sits near a boundary between two tectonic plates — they shift, we shake. But what about places that aren’t along tectonic plate boundaries? For example, seismicity on the North American plate occurs as far afield as southern Missouri, where earthquakes between 1811 and 1812 estimated at around magnitude 7 caused the Mississippi River to flow backward for hours. Until now, the cause of that seismicity has remained unclear. While earthquakes along tectonic plate boundaries are caused by motion between the plates, earthquakes away from fault lines are primarily driven by motion beneath the plates, according to a new study published by USC scientist Thorsten Becker in Nature on Aug. 27. “This will not be the last word on the origin of strange earthquakes. Gmail. Faking quakes at full scale: Giant shake tables simulate earthquakes to make buildings safer. 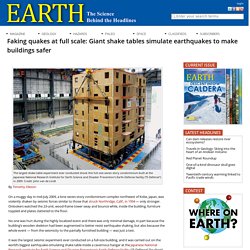 Credit: John van de Lindt By Timothy Oleson On a muggy day in mid-July 2009, a lone seven-story condominium complex northwest of Kobe, Japan, was violently shaken by seismic forces similar to those that struck Northridge, Calif., in 1994 — only stronger. Onlookers watched the 23-unit, wood-frame tower sway and bounce while, inside the building, furniture toppled and plates clattered to the floor. No one was hurt during the highly localized event and there was only minimal damage, in part because the building’s wooden skeleton had been augmented to better resist earthquake shaking, but also because the whole event — from the seismicity to the partially furnished building — was just a test. In 1994, real seismic waves wreaked havoc on the Los Angeles area. Shake It Up! Engineering for Seismic Waves. Summary Students learn about how engineers design and build shake tables to test the ability of buildings to withstand the various types of seismic waves generated by earthquakes. 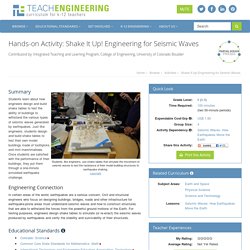 Just like engineers, students design and build shake tables to test their own model buildings made of toothpicks and mini marshmallows. Once students are satisfied with the performance of their buildings, they put them through a one-minute simulated earthquake challenge. Engineering Connection In certain areas of the world, earthquakes are a serious concern. Educational Standards Each TeachEngineering lesson or activity is correlated to one or more K-12 science, technology, engineering or math (STEM) educational standards.

SHAKE TABLE. A shake table can be used to test the resistance of structures to seismic shaking. 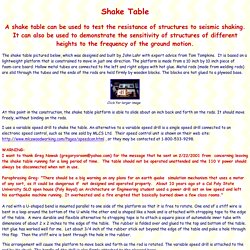 It can also be used to demonstrate the sensitivity of structures of different heights to the frequency of the ground motion. The shake table pictured below, which was designed and built by John Lahr with expert advice from Tom Tompkins. It is based on a lightweight platform that is constrained to move in just one direction. The platform is made from a 10 inch by 10 inch piece of foam-core board. Hollow metal tubes are connected to the left and right edges with hot glue. Teacher Enrichment Lesson 5: Engineering Application. RAFT Bay Area - Resource Area For Teaching. RAFT Needs Your Support Join RAFT and Silicon Valley Community Foundation for Silicon Valley Gives, a one-day event to bring community and nonprofits together in a big way. 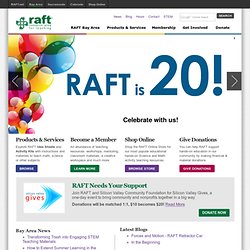 Donations will be matched 1:1, $10 becomes $20! Read More It’s a day of unprecedented online giving on May 6th. An Interactive Earthquake Engineering Resource for Middle Grade Students. Student at computer This Web site was developed to provide middle school teachers with a comprehensive, single source education tool. 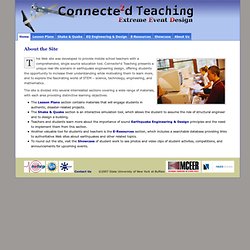 Connecte²d Teaching presents a unique real-life scenario in earthquake engineering design, offering students the opportunity to increase their understanding while motivating them to learn more, and to explore the fascinating world of STEM – science, technology, engineering, and mathematics. The site is divided into several interrelated sections covering a wide range of materials, with each area providing distinctive learning objectives. The Lesson Plans section contains materials that will engage students in authentic, disaster-related projects.

The Shake & Quake section is an interactive simulation tool, which allows the student to assume the role of structural engineer and to design a building.