How To Be Persuasive. What Is Persuasion? 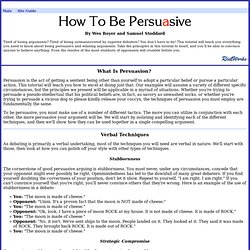 Persuasion is the act of getting a sentient being other than yourself to adopt a particular belief or pursue a particular action. This tutorial will teach you how to excel at doing just that. Our examples will assume a variety of different specific circumstances, but the principles we present will be applicable in a myriad of situations. Whether you're trying to persuade a pseudo-intellectual that his political beliefs are, in fact, as savory as unwashed socks, or whether you're trying to persuade a vicious dog to please kindly release your coccyx, the techniques of persuasion you must employ are fundamentally the same. To be persuasive, you must make use of a number of different tactics. Verbal Techniques As debating is primarily a verbal undertaking, most of the techniques you will need are verbal in nature. Stubbornness The cornerstone of good persuasive arguing is stubbornness.

You: "The moon is made of cheese. " Strategic Compromise Big Words Forgetfulness Interruption. Jokes - Arguing effectively. How to Argue Effectively I argue very well. 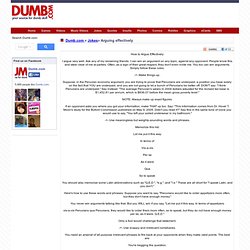 Ask any of my remaining friends. I can win an argument on any topic, against any opponent. People know this and steer clear of me at parties. Often, as a sign of their great respect, they don't even invite me. -=- Make things up. Suppose, in the Peruvian economy argument, you are trying to prove that Peruvians are underpaid, a position you base solely on the fact that YOU are underpaid, and you are not going to let a bunch of Peruvians be better off.

NOTE: Always make up exact figures. If an opponent asks you where you got your information, make THAT up too. -=- Use meaningless but weighty-sounding words and phrases. Memorize this list: Let me put it this way In terms of Vis-a-vis Per se As it were Qua So to speak. How to Argue Using the Socratic Method: 4 Steps. Edit Article Edited by MA, Krystle, GCohen, Monica and 7 others The Socratic method can be used to show someone that they are wrong, or at least imprecise, by getting them to agree with statements that contradict their original assertion. 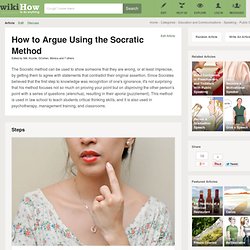 Since Socrates believed that the first step to knowledge was recognition of one's ignorance, it's not surprising that his method focuses not so much on proving your point but on disproving the other person's point with a series of questions (elenchus), resulting in their aporia (puzzlement). This method is used in law school to teach students critical thinking skills, and it is also used in psychotherapy, management training, and classrooms. Ad Steps 1Locate the statement that sums up their argument. 4Challenge the new statement with another question. Tips The Socratic Method is not about proving people wrong, but challenging assumptions. Warnings. Twelve Things Debaters Should Know About Law. This is a list of twelve things (actually, twelve sets of things) that well-informed debaters should know about law and the legal system. 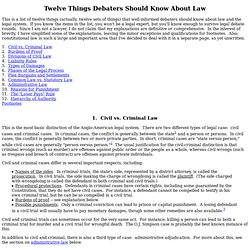 If you know the items in the list, you won't be a legal expert, but you'll know enough to survive legal debate rounds. Since I am not a lawyer, I do not claim that my explanations are definitive or comprehensive. In the interest of brevity, I have simplified some of the explanations, leaving the minor exceptions and qualifications for footnotes. Also, constitutional law is such a large and important area that I've decided to deal with it in a separate page, as yet unwritten. 1. 1. This is the most basic distinction of the Anglo-American legal system. Civil and criminal cases differ in several important respects, including: Names of the sides. Civil and criminal trials can sometimes occur for the very same act. SCHOPENHAUER'S 38 STRATAGEMS, OR 38 WAYS TO WIN AN ARGUMENT. Arthur Schopenhauer (1788-1860), was a brilliant German philosopher.

These 38 Stratagems are excerpts from "The Art of Controversy", first translated into English and published in 1896. Carry your opponent's proposition beyond its natural limits; exaggerate it. The more general your opponent's statement becomes, the more objections you can find against it. The more restricted and narrow his or her propositions remain, the easier they are to defend by him or her. Use different meanings of your opponent's words to refute his or her argument. (abstracted from the book:Numerical Lists You Never Knew or Once Knew and Probably Forget, by: John Boswell and Dan Starer) Ten Things Debaters Should Know About Economics. This is a list of ten things that debaters should know about economics. 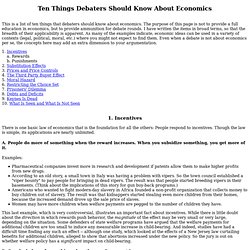 The purpose of this page is not to provide a full education in economics, but to provide ammunition for debate rounds. I have written the items in broad terms, so that the breadth of their applicability is apparent. As many of the examples indicate, economic ideas can be used in a variety of contexts (legal, political, moral, etc.) where you might not expect to find them. Even when a debate is not about economics per se, the concepts here may add an extra dimension to your argumentation. 1. 1. There is one basic law of economics that is the foundation for all the others: People respond to incentives. A. Examples: Pharmaceutical companies invest more in research and development if patents allow them to make higher profits from new drugs.