Customize. Benghazi suspect, now on U.S. soil and in federal custody, could face judge Saturday. WASHINGTON – Ahmed Abu Khatallah, the Libyan militant charged in the 2012 Benghazi attacks, is in federal law enforcement custody and could face a judge as early as Saturday, authorities said. 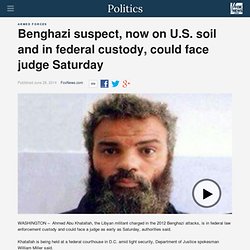 Khatallah is being held at a federal courthouse in D.C. amid tight security, Department of Justice spokesman William Miller said. He was flown to Washington by helicopter shortly after sunrise from a navy warship, where he had been held since his capture nearly two weeks ago. Khatallah is accused of being involved in the Sept. 11, 2012 attack in Libya that led to the deaths of former U.S. Ambassador Chris Stevens, information officer Sean Smith, and former navy SEALs Tyrone Woods and Glen Doherty. Stevens, 52, was the first U.S. ambassador to be killed in the line of duty since 1979. There’s a possibility that Khatallah could face a federal judge Saturday afternoon for an initial court appearance at which the government would outline the charges against him. Are These Images Proof Of Real Time Travel?

Ladies and gentlemen, we have a problem. 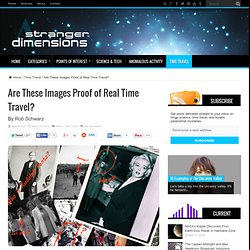 Apparently, no one is willing to follow proper time travel etiquette. Time travelers are leaving proof of their escapades everywhere! Well, the best I can do is keep track of these temporal anomalies. What follows are a series of images that many claim are evidence that time travel has already occurred, and that visitors from the future have mingled with cultures throughout history. Join me as I explore these temporal tears in the fabric of the universe. Our first stop on this temporal disaster is China. In December 2008, Chinese archaeologists allegedly removed the opening of a giant coffin within what was believed to be an undisturbed, 400-year old Si Qing tomb in Shangsi County.

Pitstop (Racing Games » Pimp My Ride Games) - MyGame.co.uk. Viral Nova - Trending Stories and Pictures Around the Web. Oklahoma Earthquake Caught on Live Television. Oklahoma has seen a swarm of earthquake activity in recent years, a trend that has been linked to oil and gas drilling operations across the state. 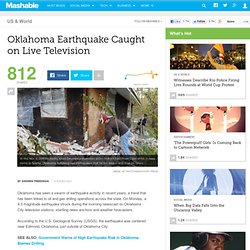 If the anchors seem spooked, but not entirely surprised by the tremors, there's a good reason for that. In early May, the USGS and the Oklahoma Geological Survey issued a warning to Oklahoma residents, informing them of a dramatically higher risk of a damaging magnitude 5.5 or greater earthquake than previously assumed. Have something to add to this story? Memphis man faces death penalty after conviction in shooting deaths of girlfriend, her parents. MEMPHIS, Tennessee — A Memphis man could face the death penalty after a jury convicted him Saturday of killing his girlfriend and her parents in a shooting rampage more than two years ago. 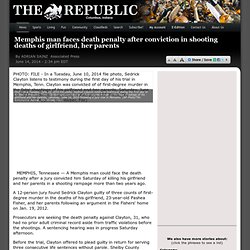 A 12-person jury found Sedrick Clayton guilty of three counts of first-degree murder in the deaths of his girlfriend, 23-year-old Pashea Fisher, and her parents following an argument in the Fishers' home on Jan. 19, 2012. Prosecutors are seeking the death penalty against Clayton, 31, who had no prior adult criminal record aside from traffic violations before the shootings. A sentencing hearing was in progress Saturday afternoon. Before the trial, Clayton offered to plead guilty in return for serving three consecutive life sentences without parole. Shelby County District Attorney Amy Weirich rejected the offer. Authorities say Clayton got into an argument with Fisher before shooting her parents, Arithio and Patricia Fisher, and then her. "We knew it was an uphill battle all the time," Skahan said. Digg - What the Internet is talking about right now. 3 Sisters With Unique Talents Sing A Rendition Of “Pilot Me” That Will Uplift You!

Daily Christian Inspiration. The 13 Disciples. The Thirteen Disciples (Not Twelve?) 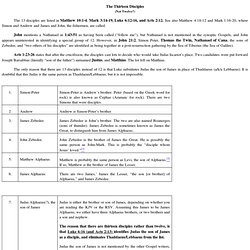 However, in John 21:2, Simon Peter, Thomas the Twin, Nathanael of Cana, the sons of Zebedee, and “two others of his disciples” are identified as being together in a post-resurrection gathering by the Sea of Tiberius (the Sea of Galilee). Acts 1:23-26 states that after the crucifixion, the disciples cast lots to decide who would take Judas Iscariot’s place. The only reason that there are 13 disciples instead of 12 is that Luke substitutes Judas the son of James in place of Thaddaeus (a/k/a Lebbaeus).

A+ Stories & Products. The Mighty. UberConference.

Related:  TRENDING   -  veille   -  barbarabusby2   -  Are These Images Proof Of Real Time Travel?   -  Viral Nova - Trending Stories and Pictures Around the Web   -  Digg - What the Internet is talking about right now   -  Education   -  Enterprise