Latinos in Hollywood: Few Roles, Frequent Stereotypes, New Study Finds. Latinos may be the most avid movie goers in the country, but chances are they won't be seeing many Hispanics on screen. 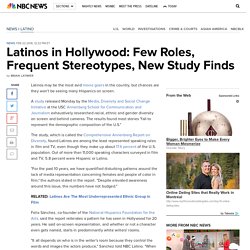 A study released Monday by the Media, Diversity and Social Change Initiative at the USC Annenberg School for Communication and Journalism exhaustively researched racial, ethnic and gender diversity on screen and behind cameras. The results found most stories "fail to represent the demographic composition of the U.S. " The study, which is called the Comprehensive Annenberg Report on Diversity, found Latinos are among the least represented speaking roles in film and TV, even though they make up about 17.4 percent of the U.S. population.

Latinos Are Biggest Moviegoers, Yet Few Roles In Top Movies. Recent surveys consistently show Latino families are the most avid movie theater goers, yet when it comes to Latino actors in top roles, the numbers are very low. 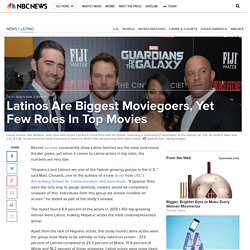 “Hispanics and Latinos are one of the fastest-growing groups in the U.S.,” said Marc Choueiti, one of the authors of a new study from USC's Annenberg School for Communication and Journalism. “If popular films were the only way to gauge diversity, viewers would be completely unaware of this. Individuals from this group are almost invisible on screen,” he stated as part of the study's release. Wheres the Representation?: The Impact of White Washing on Black. Out of 30,000 Hollywood film characters, here's how many weren't white. Actress Viola Davis holds the award for Outstanding Lead Actress In A Drama Series for her role in ABC’s “How To Get Away With Murder” during the 67th Primetime Emmy Awards in Los Angeles, California. 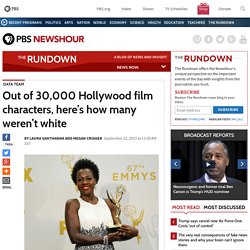 REUTERS/Mike Blake – Viola Davis’s historic Emmy win served as an important milestone for African American actresses this week, but data suggest that the entertainment industry could do far more to achieve greater diversity in film. For Nearly a Decade, Diversity in Film Remain Largely UnchangedPercent of Characters by Race/Ethnicity in Top-Grossing Films: 2007-2014 White. Study: White and black children biased toward lighter skin. 'Why do you want that skin color? 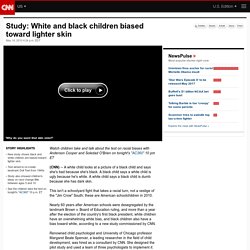 ' New study shows black and white children are biased toward lighter skinTest aimed to re-create landmark Doll Test from 1940sStudy also showed children's ideas on race change little between ages 5 and 10 See the children take the test on tonight's "AC360" 10 p.m. ET Watch children take and talk about the test on racial biases with Anderson Cooper and Soledad O'Brien on tonight's "AC360" 10 pm ET. The Pygmalion Effect. The work of Rosenthal and Jacobsen (1968), among others, shows that teacher expectations influence student performance.

Fact check - why representation matters in the long run – jenniferay1 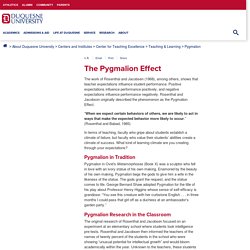 Rosenthal and Jacobson originally described the phenomenon as the Pygmalion Effect. “When we expect certain behaviors of others, we are likely to act in ways that make the expected behavior more likely to occur.” (Rosenthal and Babad, 1985) In terms of teaching, faculty who gripe about students establish a climate of failure, but faculty who value their students’ abilities create a climate of success. Brown at 60: The Doll Test. Doctors Kenneth and Mamie Clark and "The Doll Test" In the 1940s, psychologists Kenneth and Mamie Clark designed and conducted a series of experiments known colloquially as “the doll tests” to study the psychological effects of segregation on African-American children. 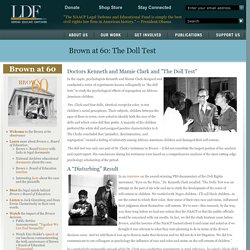 Drs. Clark used four dolls, identical except for color, to test children’s racial perceptions. Their subjects, children between the ages of three to seven, were asked to identify both the race of the dolls and which color doll they prefer. Exploring Racism in Overlooked Objects. Children’s toys: offensive or not?

In a moderated discussion on Feb. 8, professor Robin Bernstein posited that racism often exists in unlikely objects and concepts of a culture. 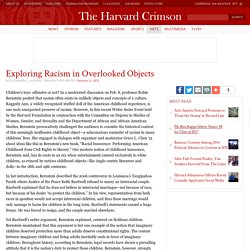 Raggedy Ann, a widely recognized stuffed doll of the American childhood experience, is one such unexpected preserve of racism. However, in this recent Writer Series Event held by the Harvard Foundation in conjunction with the Committee on Degrees in Studies of Women, Gender, and Sexuality and the Department of African and African American Studies, Bernstein provocatively challenged the audience to consider the historical context of this seemingly inoffensive childhood object—a subconscious reminder of racism in many childrens’ lives. 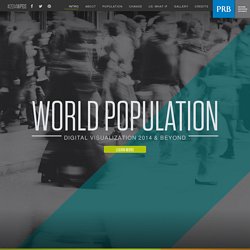 Census Bureau, Current Population Reports, P60-245, Table B-2. Projections graphs: PRB analysis of data on rates by race/ethnicity from the U.S. MLA In-Text Citation Guide: How to Use Parenthetical Citations. Why we use parenthetical / in-text citations Researchers place brief parenthetical descriptions to acknowledge which parts of their paper reference particular sources. 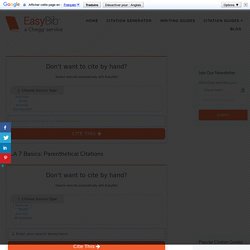