SQL Server Connection Strings for ASP_NET Web Applications – ASP.NET and Web Tools Developer Content Team. [Note: This post is a preliminary version of a document that has been published on MSDN. 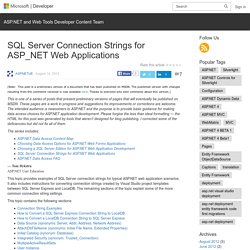 The published version with changes resulting from the comments received is now available here. Thanks to everyone who sent comments about this version.] This is one of a series of posts that present preliminary versions of pages that will eventually be published on MSDN. These pages are a work in progress and suggestions for improvements or corrections are welcome. 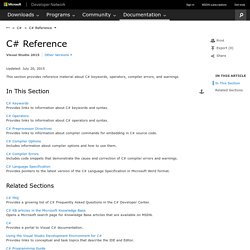 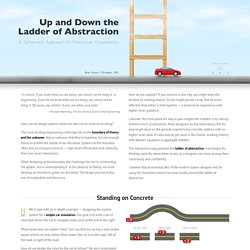 Likewise, when creating abstractions, stepping down is as important as stepping up. Here, we take the abstraction from the previous section, and overlay a concrete representation on top of it. That is, we draw the trajectory that represents all time, but we also draw the car at some particular time. How do we select which particular time to show? The Nature of Code. “Pathological monsters! 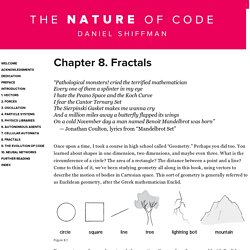 Cried the terrified mathematician Every one of them a splinter in my eye I hate the Peano Space and the Koch Curve I fear the Cantor Ternary Set The Sierpinski Gasket makes me wanna cry And a million miles away a butterfly flapped its wings On a cold November day a man named Benoit Mandelbrot was born” — Jonathan Coulton, lyrics from “Mandelbrot Set” Once upon a time, I took a course in high school called “Geometry.” Perhaps you did too. You learned about shapes in one dimension, two dimensions, and maybe even three. What is the circumference of a circle? Particle effects in Edge Animate. One of the most exciting perks of using Adobe’s Edge Animate is the seamless integration with new, exciting CSS features that I didn’t even know existed until exploring Edge Animate further. 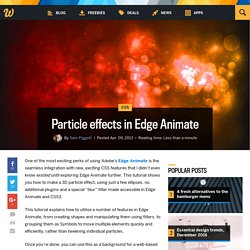 This tutorial shows you how to make a 3D particle effect, using just a few ellipses, no additional plugins and a special “blur” filter made accessible in Edge Animate and CSS3. This tutorial explains how to utilise a number of features in Edge Animate, from creating shapes and manipulating them using filters, to grouping them as Symbols to move multiple elements quickly and efficiently, rather than tweening individual particles.

Once you’re done, you can use this as a background for a web-based gallery banner, and perhaps layer content between your new particles; or even as a full-screen background for your website, constantly moving slowly to give your design a really subtle yet dynamic feel! What effects have you created in Edge Animate? What would you like to be able to build? Space Invaders RPG. Building a Game in Adobe Edge Animate — bmanderscheid. First we create a variable that will hold a reference to the current screen symbol on the stage. 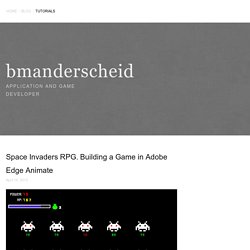 Next, we write a simple global object where we can store various things that we may need throughout the game. In this case, we only need to know if the player won or lost when our GameOver screen loads - game.GLOBALS.win. Our init function does a few things to kick off the game. Hacking for Artists. Kurt Vonnegut graphed the world’s most popular stories. This post comes via Know More, Wonkblog's social media site. 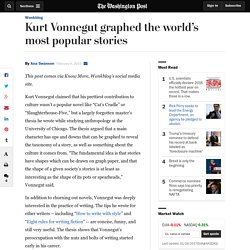 Kurt Vonnegut claimed that his prettiest contribution to culture wasn’t a popular novel like “Cat’s Cradle” or “Slaughterhouse-Five,” but a largely forgotten master’s thesis he wrote while studying anthropology at the University of Chicago. The thesis argued that a main character has ups and downs that can be graphed to reveal the taxonomy of a story, as well as something about the culture it comes from. “The fundamental idea is that stories have shapes which can be drawn on graph paper, and that the shape of a given society’s stories is at least as interesting as the shape of its pots or spearheads,” Vonnegut said. A Young Person’s Guide to C# Bond. Bond is an extensible framework for working with schematized data. 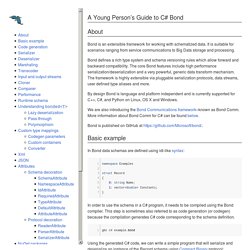 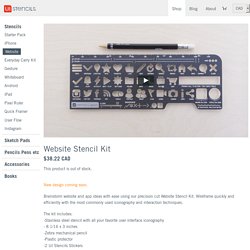 Wireframe quickly and efficiently with the most commonly used iconography and interaction techniques. The kit includes:-Stainless steel stencil with all your favorite user interface iconography- 8 1/16 x 3 inches-Zebra mechanical pencil-Plastic protector-2 UI Stencils Stickers-Downloadable .PDF letter or A4 paper template This kit works precisely with our Responsive Sketch Pad or our Browser Sketch pad.