The Whitewashing of the American Farmer: Dodge Ram Super Bowl Ad Edition - Alexis C. Madrigal. Maybe God did make farmers, but why'd Dodge only show us the white ones? 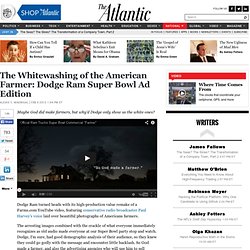 Dodge Ram turned heads with its high-production value remake of a Farms.com YouTube video, featuring conservative radio broadcaster Paul Harvey's voice laid over beautiful photographs of Americans farmers. The arresting images combined with the crackle of what everyone immediately recognizes as old audio made everyone at our Super Bowl party stop and watch. Dodge, I'm sure, had good demographic analysis of their audience, so they knew they could go godly with the message and encounter little backlash. So God made a farmer, and also the advertising agencies who will use him to sell trucks. Quibbles aside, I'd rather have this kind of Americana than GoDaddy's bizarre antics. But there's a problem. Stipulating that visual inspection is a rough measure for the complex genealogical histories of people, I decided to count the race and ethnicity of the people in Dodge's ad.

Ever wondered how so many of your friends on. New-aesthetic: To Catch A Suspect — On... Newsweek: nwkarchivist: The Historical Jesus? Slide Show: Obama on The New Yorker's Cover. In the past four years, the covers that feature President Obama, his family, and his political foes have taken many forms. 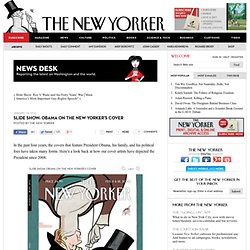 Here’s a look back at how our cover artists have depicted the President since 2008. “Eustace Tillarobama,” by Ria Irvin and Seth. February 11 & 18, 2008. “I’ll Get It! ,” by Barry Blitt. “Herding Cats,” by Barry Blitt. Advertisement Sign up for email newsletters. One Dad's Ill-Fated Battle Against the Princesses - Andy Hinds. He tried to keep Cinderella and Rapunzel away from his daughters, but the girls found them anyway. 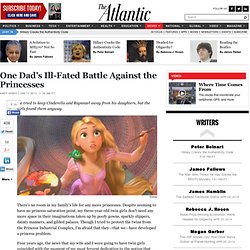 Disney There's no room in my family's life for any more princesses. Despite seeming to have no princess saturation point, my three-year-old twin girls don't need any more space in their imaginations taken up by poofy gowns, sparkly slippers, dainty manners, and gilded palaces. Though I tried to protect the twins from the Princess Industrial Complex, I'm afraid that they—that we—have developed a princess problem. Four years ago, the news that my wife and I were going to have twin girls coincided with the moment of my most fervent dedication to the notion that gender is, for the most part, socially constructed.

Before the twins were born, friends and family inundated us with hand-me-down "girl clothes. " During the first two years of parenthood, I was able to maintain the princess blockade in our home with very few breaches. "Um... " Sometime after my daughters' third birthday, I gave up. How movies can teach manhood: Colin Stokes. Speaking of appealing to various beer drinkers. Super Bowl Media Literacy Questions. The Persuaders. FRONTLINE takes an in-depth look at the multibillion-dollar "persuasion industries" of advertising and public relations and how marketers have developed new ways of integrating their messages deeper into the fabric of our lives. 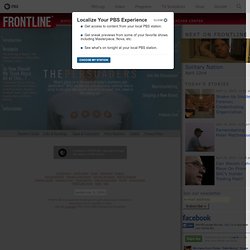 Through sophisticated market research methods to better understand consumers and by turning to the little-understood techniques of public relations to make sure their messages come from sources we trust, marketers are crafting messages that resonate with an increasingly cynical public. In this documentary essay, correspondent Douglas Rushkoff (correspondent for FRONTLINE's "The Merchants of Cool") also explores how the culture of marketing has come to shape the way Americans understand the world and themselves and how the techniques of the persuasion industries have migrated to politics, shaping the way our leaders formulate policy, influence public opinion, make decisions, and stay in power.

Behold, the First Video-Game About the Millennials - Joseph Bernstein. In Far Cry 3, a stalling man-boy graduates from "first-world problems" to real-world problems. 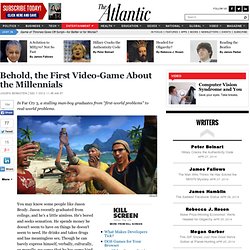 Ubisoft You may know some people like Jason Brody. Jason recently graduated from college, and he's a little aimless. He's bored and seeks sensation. He spends money he doesn't seem to have on things he doesn't seem to need. Brody, the hero of Ubisoft's commendable new shooting game Far Cry 3, is unmistakably a Millennial, that subject of a thousand unsatisfying think pieces in a hundred magazines. The game begins with a montage of Jason and friends flitting dilettantishly about some Southeast Asian sin den, in the manner of good, debauched Millennials.

Because we are in video-game land, the answer is: very easily, thanks. Rook Island is technically in the South Pacific, but it is really a surreal microcosm of the "Third World" as seen by the "First World. " When Jason first arrives on the island, he can't compete. "He is back from the dead! " Far Cry 3 is a "sandbox" game.