Mummification. Egyptian Mummies. Ancient Egyptian Games To understand Egyptian mummies you have to first know about their religious beliefs. 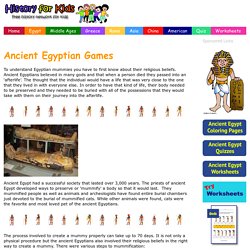 Ancient Egyptians believed in many gods and that when a person died they passed into an ‘afterlife’. The thought that the individual would have a life that was very close to the one that they lived in with everyone else. In order to have that kind of life, their body needed to be preserved and they needed to be buried with all of the possessions that they would take with them on their journey into the afterlife. How to Make a Mummy! - National Geographic Kids. Want to make sure a body gets reunited with its spirit in the afterlife? 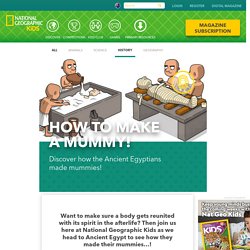 Then join us here at National Geographic Kids as we head to Ancient Egypt to see how they made their mummies…! 1. First wash the dead body in wine and Nile water. Make a cut in the side and take out the organs. Ancient Egypt for Kids and Teachers. Sequence Chain: Mummification. Ceremony: Ceremony by 4 priests, one dressed as Anubis. 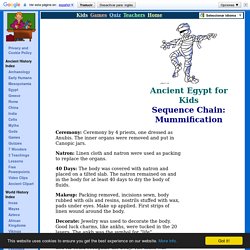 The inner organs were removed and put in Canopic jars. Natron: Linen cloth and natron were used as packing to replace the organs. Horrible Histories The Pharoh Report. Ancient Egypt For Kids. Egyptian boats Egyptian boats The Ancient Egyptians built boats out of wood and reeds to travel up and down the River Nile. 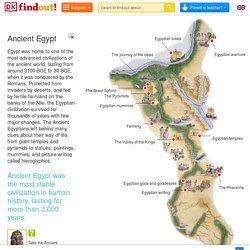 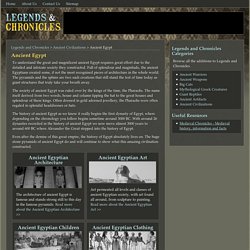 Full of splendour and magnitude, the ancient Egyptians created some, if not the most recognised pieces of architecture in the whole world. The pyramids and the sphinx are two such creations that still stand the test of time today as giant structures that truly take your breath away. The society of ancient Egypt was ruled over by the kings of the time, the Pharaohs. The name itself derived from two words, house and column tipping the hat to the great houses and splendour of these kings. Often dressed in gold adorned jewellery, the Pharaohs were often regaled in splendid headdresses or hats. In the Land of the Pyramids Quiz. Ancient Egypt for Kids - History Games and Videos. Ancient Egypt for Kids Ancient Egypt was a civilization that thrived for over 3000 years along the Nile River in northeastern Africa. 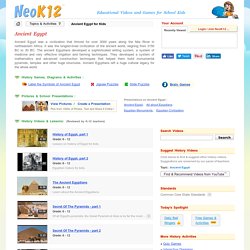 It was the longest-lived civilization of the ancient world, reigning from 3150 BC to 30 BC. Search Results (Egypt, page 1) World History: Ancient Egypt for Kids. Back to History Ancient Egypt was one of the greatest and most powerful civilizations in the history of the world. 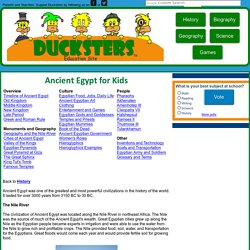 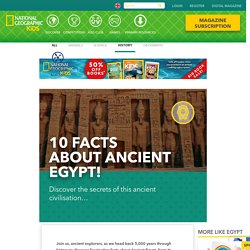 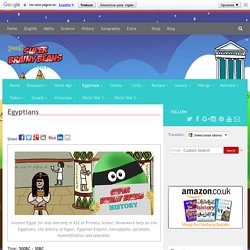 Homework help on the Egyptians, the history of Egypt, Egyptian Empire, hieroglyphs, pyramids, mummification and pharaohs. Time: 500BC – 30BC. Ancient Egyptian Schools for Kids - Fun Facts. Egyptian School Formal education in ancient Egypt was mostly reserved for the boys of wealthier families. 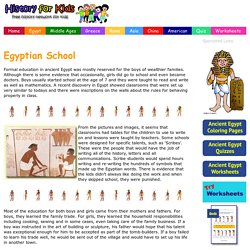 Although there is some evidence that occasionally, girls did go to school and even became doctors. Boys usually started school at the age of 7 and they were taught to read and write as well as mathematics.