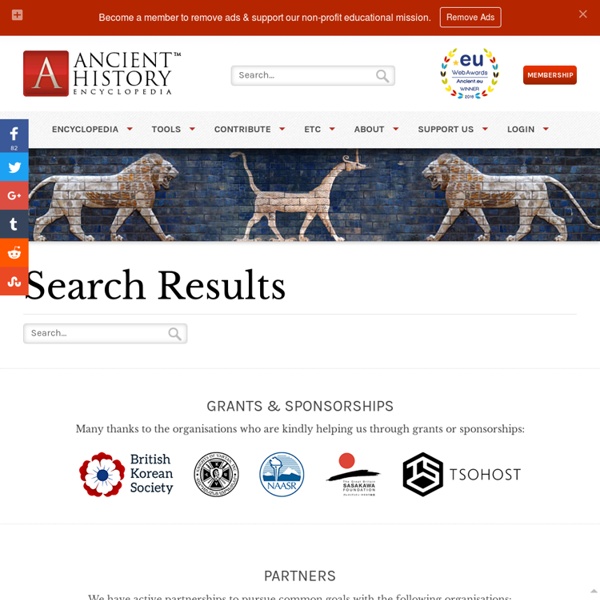 The Incas for Kids - Terrace Farming Nobody went hungry in the Inca empire. The commoners ate little meat, but all people ate well. The Inca were the first to grow potatoes. There were many crops. History: Ancient Greece for Kids Ancient Greece was a civilization that dominated much of the Mediterranean thousands of years ago. At its peak under Alexander the Great, Ancient Greece ruled much of Europe and Western Asia. The Greeks came before the Romans and much of the Roman culture was influenced by the Greeks. Ancient Greece formed the foundation of much of Western culture today. Everything from government, philosophy, science, mathematics, art, literature, and even sports was impacted by the Ancient Greeks. The Acropolis of Athens by Salonica84

History for Kids: Aztecs, Maya, and Inca Back to History The three most dominant and advanced civilizations that developed in the Americas prior to the arrival of the Europeans were the Aztecs, the Maya, and the Inca. Map of Aztec, Mayan, and Incan Civilizations by Ducksters 10 Facts About the Vikings - National Geographic Kids After the Anglo-Saxons, came the vicious Vikings! Join the National Geographic Kids gang as we learn to live like a Scandinavian sea-warrior, in our ten fierce facts about the Vikings… 1. The Vikings were famous for sailing huge distances from their home in Scandinavia between AD 800 and 1066 to raid and plunder, but they also traded with people from other countries.

Inca Art Home - Inca Civilization - Inca Art The Legacy of Incan Pottery and Art The legendary Incas of Peru have been likened to the Romans for the innovations they created during their reign, especially when it comes to agriculture, architecture and construction. However, outside of the marvel that is Machu Picchu, the major ruins left behind after their near extinction at the hands of the explorer Pizarro, Incan art is the most recognizable trace left to us of their remarkable foresight and skills. Inca Art - Background

Ancient Greece for Kids - History Games and Videos Ancient Greece for Kids The ancient Greek civilization thrived around the Mediterranean Sea from the 1100 BC to 146 BC. Known for its advances in philosophy, politics, religion, architecture, arts, government, and science, it is considered to have laid the foundation of the Western civilization and had a powerful influence throughout Southwest Asia and North Africa.

Maya Civilization for Kids - History Games and Videos Maya Civilization for Kids The Maya civilization was one of the most advanced ancient civilizations in the Central and South America before arrival of Europeans. They had an estimated reign of over 2000 years. The Vikings The Vikings hailed from the north of Europe in what is now known as Scandinavia. Interestingly enough the term Viking itself can be translated to 'man of the bay' of course describing the home of the old Norse. The country of origin in Scandanavia mattered not however, whether it was Norway, Denmark or Sweden the term Viking was associated with pirates and raiders, this was a way of life for the adventurous Viking people. Another definition of a Viking is one who spoke Old Norse the language of the Viking people. 10 facts about the Ancient Greeks - National Geographic Kids Ready for an adventure back in time, gang? Then join us as we discover ten fascinating facts about Ancient Greece! And once you’ve had your fill of Ancient Greek facts, be sure to scroll down to learn more about Greece today… Article continues below… Facts about Ancient Greece

Satellite images hint at lost Mayan city - National Geographic Kids Did a 15-year-old boy really discover the remains of a Mayan city? Recently it was reported that William Gadoury, a teenager from Quebec, Canada, might have discovered an ancient settlement, hidden in the depths of the Mexican jungle. Using maps and charts, William spotted a link between the ancient civilisation’s settlements and the stars – they lined up! Checking locations against a map of Maya constellations, he discovered one city was missing from a constellation of three stars. After studying satellite images from the Canadian Space Agency and Google Earth, he noticed some strange shapes lying beneath the jungle canopy – wow! However, critics are undecided as to whether the teen really has made an ancient discovery.