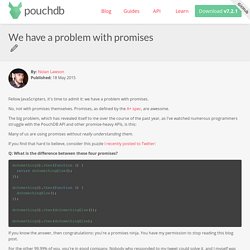 For the other 99.99% of you, you're in good company. Git hg rosetta stone · sympy/sympy Wiki. The sympy git server is at . 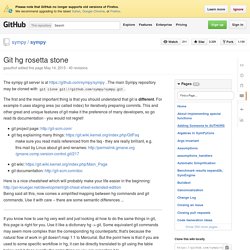 The main Sympy repository may be cloned with git clone The first and the most important thing is that you should understand that git is different. For example it uses staging area (so called index) for iteratively preparing commits. This and other great and unique features of git make it the preference of many developers, so go read its documentation - you would not regret! Here is a nice cheatsheet which will probably make your life easier in the beginning: Flat-Fee Brokers, FSBO Offer Options for Sellers. This article originally ran on May 18, 2004. 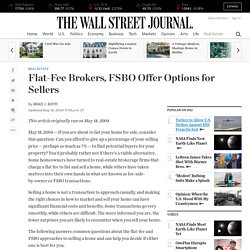 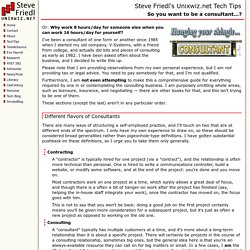 I've been a consultant of one form or another since 1985 when I started my old company, V-Systems, with a friend from college, and actually did bits and pieces of consulting as early as 1982. I have been asked often about the business, and I decided to write this up. Please note that I am providing observations from my own personal experience, but I am not providing tax or legal advice. You need to pay somebody for that, and I'm not qualified. Furthermore, I am not even attempting to make this a comprehensive guide for everything required by one in or contemplating the consulting business.

These sections (except the last) aren't in any particular order. When To Leave Your Programming Job. I am often approached by programmers that are thinking about leaving their job but want to discuss to see if they are making a wise move. 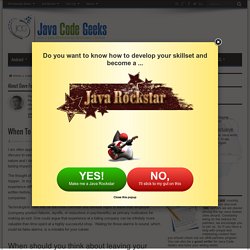 These conversations are quite sensitive in nature and I do not take them lightly, as the decision is rarely easy to make and will have a lasting impact on the programmer’s career and livelihood. The thought of potentially leaving a job is often accompanied by the fear of being labeled a job hopper. In my experience, far more programmers tend to overstay their welcome and later experience difficulty with limited career prospects than those that move jobs too often. As I’ve written before, some positive flow in career moves is expected and even desired by hiring companies.

Technologists often rely on the more common and obvious signs to leave their employer (company product failures, layoffs, or reductions in pay/benefits) as primary motivators for making an exit. My thoughts about Build, Windows 8, WinRT, XAML and Silverlight. Porting Silverlight or WPF XAML/code to a Windows Store app. If you're familiar with other XAML-based platforms such as Windows Presentation Foundation (WPF), Microsoft Silverlight or Silverlight for Windows Phone, then you can re-use these skills to create Windows Store apps. 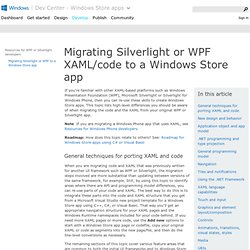 This topic lists high-level differences you should be aware of when migrating the code and the XAML from your original WPF or Silverlight app. Note If you are migrating a Windows Phone app that uses XAML, see Resources for Windows Phone developers. Porting a Silverlight App to a Metro-Style App. In-Depth Porting a Silverlight App to a Metro-Style App Next, I needed to add in our event handler for the HyperlinkButton and copy/paste the existing Close Button event handler: void HyperlinkButton_Click(object sender, RoutedEventArgs e) { Windows.System.Launcher.LaunchDefaultProgram( new Uri(hlbStoryTitle.Tag.ToString(), UriKind.RelativeOrAbsolute)); } void CloseBtn_Click(object sender, RoutedEventArgs e) { Visibility = Visibility.Collapsed; } By using Windows.System.Launcher.LaunchDefaultProgram, I was able to pass it a URI so it automatically launches the default browser. 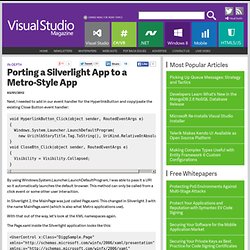 This method can only be called from a click event or some other user interaction. In Silverlight 2, the MainPage was just called Page.xaml. With that out of the way, let's look at the XML namespaces again. The Page.xaml inside the Silverlight application looks like this: I was able to copy and paste the entire Page.xaml inside of my MainPage.xaml file and fix the following namespaces for the Metro application: Turning to the past to power Windows’ future: An in-depth look at WinRT. With its new tablet-friendly user interface, Windows 8 is going to be a revolution for both desktop users and tablet users alike. 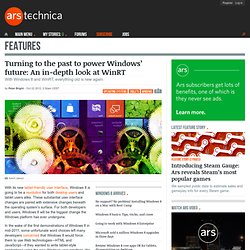 These substantial user interface changes are paired with extensive changes beneath the operating system's surface. For both developers and users, Windows 8 will be the biggest change the Windows platform has ever undergone. In the wake of the first demonstrations of Windows 8 in mid-2011, some unfortunate word choices left many developers concerned that Windows 8 would force them to use Web technologies—HTML and JavaScript—if they wanted to write tablet-style applications using the new Windows user interface. We thought something altogether more exciting was in the cards: we felt Windows 8 would be a platform as ambitious in its scale as the (abandoned) Windows "Longhorn" project once was.

At its BUILD conference in September 2011, Microsoft unveiled Windows 8 for real and talked about application development on the new operating system.