Oscar%20Wilde%20and%20Postmodern%20Thought. Secret Selves: Confession and Same-sex Desire in Victorian Autobiography - Oliver S. Buckton. Modernism and the Theater of Censorship - Department of English University of Georgia Adam Parkes Assistant Professor. What is "bunburying,"and its significance, and how does it relate to Wilde's critique of Victorian earnestness? - Homework Help. Bunburying has several connotations: It was said by Aliester Crowley, according to Neil McKenna, that Oscar Wilde once "took the coach to Banbury, met a Public School boy there, and the agreed to meet in Sunbury" for a secret meeting. 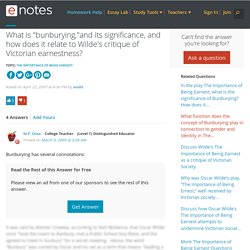 Hence, the word "Bunbury" was coined by Oscar and his set as a term that means "leading a double life" or "hiding certain secrets". Bunbury was then the name Oscar chose to name the non-existent character of the invalid that Algy goes to visit each time he also wants to go somewhere else and do whatever it is that he does. Hence, the connotation is double, as most of the symbols, names, and epigrams said in Earnest are also double entendres for Oscar's own tribulations. Earnestness, also according to McKenna might be a Victorian code name that is a bad translation from the French of the term "Uraniste" or Uranian (homosexual) Earnest/Uraniste.

Yet, if we use the term "as is", bunburying would be the antithesis of earnestness, that is, lies vs. truth. What function does the concept of Bunburying play in connection to gender and identity in The Importance of Being... - Homework Help. The central conflict of the this great play comes about because of Bunburying. 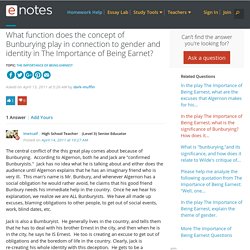 According to Algernon, both he and Jack are "confirmed Bunburyists. " Jack has no idea what he is talking about and either does the audience until Algernon explains that he has an imaginary friend who is very ill. This man's name is Mr. Bunbury, and whenever Algernon has a social obligation he would rather avoid, he claims that his good friend Bunbury needs his immediate help in the country. Once he we hear his explanation, we realize we are ALL Bunburyists. Jack is also a Bumburyist. Bunburying - The Literature Network Forum. No Subject Bunburying is a system in which Algernon invented and uses to escape from unwanted social obligations. 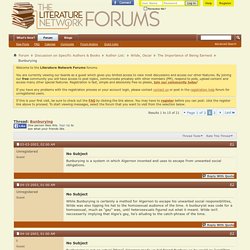 No Subject While Bunburying is certainly a method for Algernon to escape his unwanted social responsibilities, Wilde was also tipping his hat to the homosexual audience of the time. A bunburyist was code for a homosexual, much as "gay" was, until heterosexuals figured out what it meant. Wilde isn't neccessarily implying that Algie's gay, he's alluding to the catch-phrase of the time. No Subject Bunburying is not an actual "thing".Algernon made up hid friend Bunbury so he could go "visit"him when he did not want to visit relatives.Hence the phrase "Bunburying" No Subject If you have read the play, you should know what bunburying is. Are you sure you're an English teacher? Posting Permissions You may not post new threadsYou may not post repliesYou may not post attachmentsYou may not edit your posts Forum Rules. How do puns and paradoxes contribute to the satirical tone in Oscar Wilde's The Importance of Being Earnest. - Homework Help.

The main contribution of puns and paradoxes to the satirical tone of the play is the fact that they intensify the humor of the satire by presenting contrasting ideas that are both ridiculous and almost impossible to concede in everyday situations. 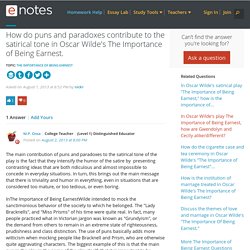 In turn, this brings out the main message that there is triviality and humor in everything, even in situations that are considered too mature, or too tedious, or even boring. Uranian. The term "Uranian" was quickly adopted by English-language advocates of homosexual emancipation in the Victorian era, such as Edward Carpenter and John Addington Symonds, who used it to describe a comradely love that would bring about true democracy, uniting the "estranged ranks of society" and breaking down class and gender barriers. 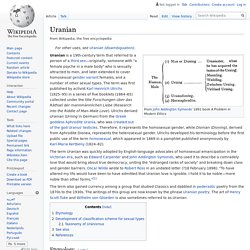 Oscar Wilde wrote to Robert Ross in an undated letter (? 18 February 1898): "To have altered my life would have been to have admitted that Uranian love is ignoble. I hold it to be noble - more noble than other forms. " Victorian era. Queen Victoria, after whom the era is named. 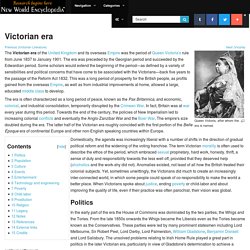 The Victorian era of the United Kingdom and its overseas Empire was the period of Queen Victoria's rule from June 1837 to January 1901. The era was preceded by the Georgian period and succeeded by the Edwardian period. Some scholars would extend the beginning of the period—as defined by a variety of sensibilities and political concerns that have come to be associated with the Victorians—back five years to the passage of the Reform Act 1832. This was a long period of prosperity for the British people, as profits gained from the overseas Empire, as well as from industrial improvements at home, allowed a large, educated middle class to develop. The era is often characterized as a long period of peace, known as the Pax Britannica, and economic, colonial, and industrial consolidation, temporarily disrupted by the Crimean War. Jane Austen's Anglicanism.