Mmunicate Magazine. What started as a PR battle with long-time nemesis Greenpeace has turned into a social media catastrophe for food manufacturer Nestle. 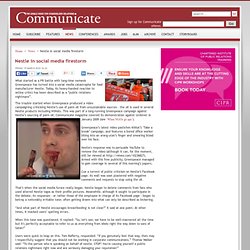 Today, its heavy-handed reaction to online critics has been described as a “public relations nightmare”. Ask Nestle to give rainforests a break. Nestle. Climate Rescue Weblog: Your Kit Kat campaigns. Nestle to stop using rain-forest palm oil, amid Facebook fracas. A new world?: Social media protest against Nestle may have longs. Protest could change the palm oil industry and wake the world up to the power of 'social media'. 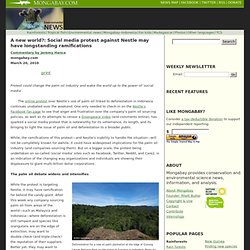 The online protest over Nestle's use of palm oil linked to deforestation in Indonesia continues unabated over the weekend. One only needed to check-in on the Nestle's Facebook fan page to see that anger and frustration over the company's palm oil sourcing policies, as well as its attempts to censor a Greenpeace video (and comments online), has sparked a social media protest that is noteworthy for its vehemence, its length, and its bringing to light the issue of palm oil and deforestation to a broader public.

While, the ramifications of this protest—and Nestle's inability to handle the situation—will not be completely known for awhile, it could have widespread implications for the palm oil industry (and companies sourcing them). The palm oil debate widens and intensifies While the protest is targeting Nestle, it may have ramification far behind the candy-giant. Social Media and Big Business. Video: Nestle's attempt to censor Greenpeace palm oil ad backfir. In a bold online video, the environmental group Greenpeace cleverly links candy-giant Nestle to oil palm-related deforestation and the deaths of orangutans. 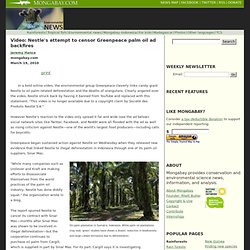 Clearly angered over the video, Nestle struck back by having it banned from YouTube and replaced with this statement: "This video is no longer available due to a copyright claim by Société des Produits Nestlé S.A. " However Nestle's reaction to the video only spread it far and wide (see the ad below): social network sites like Twitter, Facebook, and Reddit were all flooded with the ad as well as rising criticism against Nestle—one of the world's largest food producers—including calls for boycotts. Reuters.com. It’s not every day that a brand turns its most loyal followers into angry protesters. 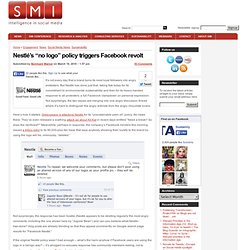 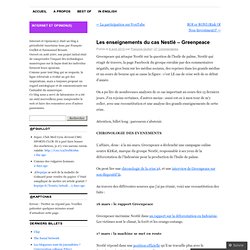 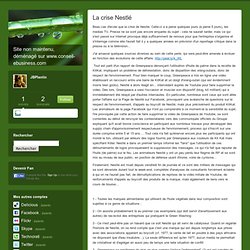 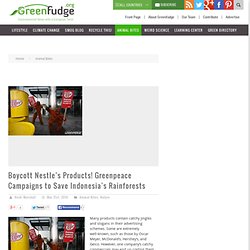 Many products contain catchy jingles and slogans in their advertising schemes. Nestle’s crash course in social media. March 20, 2010 While some companies are managing to use social media to their advantage, building their brand, connecting with customers, others are struggling. 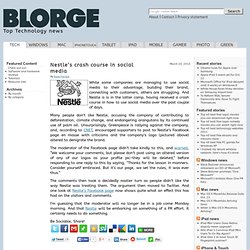 And Nestle is is in the latter camp, having received a crash course in how to use social media over the past couple of days. Many people don’t like Nestle, accusing the company of contributing to deforestation, climate change, and endangering orangutans by its continued use of palm oil. Unsurprisingly, Greenpeace is rallying against the company, and, according to CNET, encouraged supporters to post to Nestle’s Facebook page en masse with criticisms and the company’s logo (pictured above) altered to denigrate the brand. The moderator of the Facebook page didn’t take kindly to this, and warned, “We welcome your comments, but please don’t post using an altered version of any of our logos as your profile pic–they will be deleted,” before responding to one reply to this by saying, “Thanks for the lesson in manners. Nestlé boycott. A boycott was launched in the United States on July 7, 1977, against the Swiss-based Nestlé corporation. 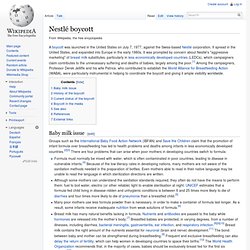 It spread in the United States, and expanded into Europe in the early 1980s. It was prompted by concern about Nestlé's "aggressive marketing" of breast milk substitutes, particularly in less economically developed countries (LEDCs), which campaigners claim contributes to the unnecessary suffering and deaths of babies, largely among the poor.[1] Among the campaigners, Professor Derek Jelliffe and his wife Patrice, who contributed to establish the World Alliance for Breastfeeding Action (WABA), were particularly instrumental in helping to coordinate the boycott and giving it ample visibility worldwide. Baby milk issue[edit] History of the boycott[edit] Nestlé's marketing strategy was first written about in New Internationalist magazine in 1973 and in a booklet called The Baby Killer, published by the British NGO War On Want in 1974. Current status of the boycott[edit] See also[edit] Nestlé. Nestlé S.A. 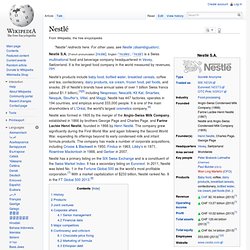 (French pronunciation: ​[nɛsle]; English /ˈnɛsleɪ/, /ˈnɛsli/) is a Swiss multinational food and beverage company headquartered in Vevey, Switzerland. It is the largest food company in the world measured by revenues.[3][4] Nestlé was formed in 1905 by the merger of the Anglo-Swiss Milk Company, established in 1866 by brothers George Page and Charles Page, and Farine Lactée Henri Nestlé, founded in 1866 by Henri Nestlé. The company grew significantly during the First World War and again following the Second World War, expanding its offerings beyond its early condensed milk and infant formula products.

Nestlé faces Facebook crisis over Greenpeace rainforest claims. Médias sociaux > Nestlé et sa page Fan Facebook : pourquoi l’éch. Greenpeace, Nestlé in battle over Kit Kat viral. Global Voices Online » Malaysia: What’s The Real Deal With Palm. Palm oil has become the target of criticism from environmentalists and green activists in recent years. In fact, just this year Nestle, Marks & Spencer's and General Mills have reacted to their use of palm oil, either dropping suppliers who are allegedly non-sustainable suppliers, or else reinforcing their stance against the destruction of primary rain forests and biodiversity hubs in South East Asia.