The Air You're Breathing? A Diatom Made That. Andrew Alverson is a biologist and expert on diatoms at the University of Arkansas in Fayetteville. 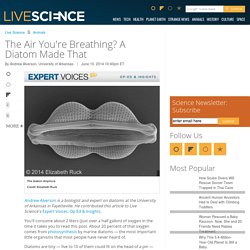 He contributed this article to Live Science's Expert Voices: Op-Ed & Insights. You'll consume about 2 liters (just over a half gallon) of oxygen in the time it takes you to read this post. About 20 percent of that oxygen comes from photosynthesis by marine diatoms — the most important little organisms that most people have never heard of.

Diatoms are tiny — five to 10 of them could fit on the head of a pin — but these single-celled algae play an immense role in keeping the planet's ecosystem working. They're important mediators of carbon and oxygen cycles, an integral component of marine food webs and the principal cyclers of silica, which constitutes about one-quarter of the Earth's crust. Diatoms incorporate that silica into their beautifully ornamented glass cell walls, whose intricate patterns have captivated researchers for centuries. So, what makes a diatom a diatom? Earth’s Oxygen Levels Continue To Decline. For the last 800,000 years, the amount of oxygen in the atmosphere has declined by about 0.7 percent. 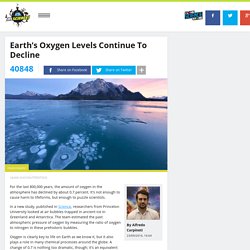 It's not enough to cause harm to lifeforms, but enough to puzzle scientists. In a new study, published in Science, researchers from Princeton University looked at air bubbles trapped in ancient ice in Greenland and Antarctica. The team estimated the past atmospheric pressure of oxygen by measuring the ratio of oxygen to nitrogen in these prehistoric bubbles. Oxygen is clearly key to life on Earth as we know it, but it also plays a role in many chemical processes around the globe.

Last Week Tonight with John Oliver: Scientific Studies (HBO) The Carrageenan Controversy. Carrageenan has been the subject of a lot of controversy and several of you have asked me to comment. 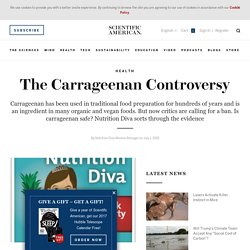 For those who may not be up to speed on the topic, let me start with a quick overview. What Is Carrageenan? Carrageenan is an extract from a red seaweed commonly known as Irish Moss. This edible seaweed is native to the British Isles, where it's been used in traditional cooking for hundreds of years. It's also widely used in the food industry, mostly as a thickener and gelling agent. Who would have thought that this ancient, natural, plant-based ingredient would become center of a swirling controversy? Continue reading on QuickAndDirtyTips.com.

Forbes Welcome. No More Carrageenan in Organic Food, Says NOSB. Carrageenan has been removed from the list of approved ingredients in organic foods, the National Organic Standards Board decided last Thursday. 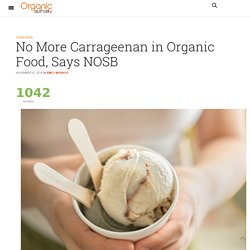 The controversial seaweed-derived substance is commonly used as an emulsifier in some food products such as ice creams, baby formula, and nut milks, despite scientific evidence that it causes digestive inflammation. Ten people on the 15-member board voted to disallow carrageenan in organic products, meeting the two-thirds vote needed; three voted to keep it on the list, and one abstained. Controversial New Research Says Carrageenan is Safe. New research funded in part by the International Food Additives Council (IFAC) seems to confirm the safety of carrageenan as a food additive. 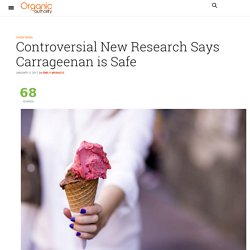 The new study, published in the journal Food and Toxicology, has failed to replicate extensive research from the University of Chicago and the University of Illinois at Chicago that suggests carrageenan causes intestinal inflammation. A member of the original Chicago research teams, however, does not believe that this research adequately replicates the methods of the original study. The new research was released just a little over a month after the U.S. National Organic Standards Board recommended removing carrageenan from the list of approved ingredients in organic foods due to its links to intestinal problems. Carrageenan’s latest five-year exemption on the national list ends in 2018. Some believe that this new information will provide ample motivation for carrageenan’s reapproval by the USDA in November 2018. However, Dr. Dr. Emily Monaco. Review of harmful gastrointestinal effects of carrageenan in animal experiments. Algae Growth. Vertical growth/closed loop production has been developed by biofuel companies to produce algae faster and more efficiently than open pond growth. 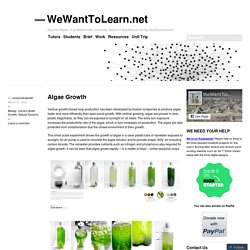 With vertical growing, algae are placed in clear plastic bags/tubes, so they can be exposed to sunlight on all sides. The extra sun exposure increases the productivity rate of the algae, which in turn increases oil production. The algae are also protected from contamination due the closed envionment of their growth. This small scale experiment shows the growth of algae in a clear plastic tube of rainwater exposed to sunlight.