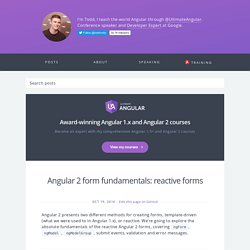 We’re going to explore the absolute fundamentals of the reactive Angular 2 forms, covering ngForm, ngModel, ngModelGroup, submit events, validation and error messages. Table of contents High-level terminology. Stephen Fluin. Angular 2 Router: Build a Navigation Menu, Nested Routes, Bootstrap 4. Getting Started with Angular 2 End To End Testing – Medium. Introduction There have been many reasons I have held out on adding automated testing to my applications in the past. 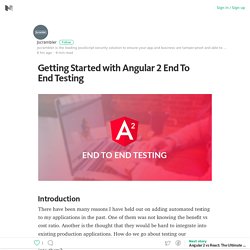 One of them was not knowing the benefit vs cost ratio. Another is the thought that they would be hard to integrate into existing production applications. How do we go about testing our applications without rewriting them from scratch just to introduce testing into them? How to write ATDD tests with cucumber-js, protractor and typescript. ATDD (Acceptance Test Driven Development) has been around for a while now. 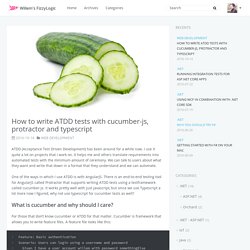 I use it quite a lot on projects that I work on. It helps me and others translate requirements into automated tests with the minimum amount of ceremony. We can talk to users about what they want and write that down in a format that they understand and we can automate. One of the ways in which I use ATDD is with AngularJS. Getting Started with Angular 2 End To End TestingJscrambler Blog. Angular 2 Router: Build a Navigation Menu, Nested Routes, Bootstrap 4. RXJS. Testing Components in Angular 2 with Jasmine - Semaphore. Dive back into Angular 2 and learn how to test components in a new tutorial in our "Test-driven Development with Angular 2 and Webpack" series. 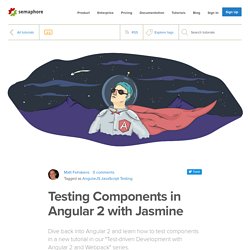 Introduction In this article, we'll look at how to unit test components built with Angular 2. Components are the centerpiece of Angular 2. They are the nucleus around which the rest of the framework is built. Building Hacker News with Angular 2 CLI, RxJS and Webpack. If you have ever built an Angular 2 application before, you’ll know that setting up and bootstrapping an application can take a significant amount of time. 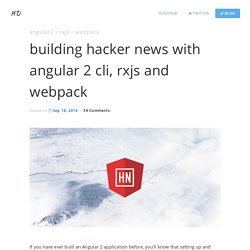 Thankfully, the Angular team have rolled out Angular CLI, a command line interface that makes creating and scaffolding an application significantly easier. In this post, we’ll build an entire Hacker News client using Angular CLI, RxJS Observables and Webpack as our module loader. We’ll go through building the entire application step by step. Throughout this post, I’ll try my best to explain my thought process as well as some of the mistakes I’ve made and what I did to fix them. Here’s a rundown of what we’ll be doing. Testing Components in Angular 2 with Jasmine - Semaphore. E2E Testing In Angular 2 From Zero To Hero (Final Part) - JavaScript Screencasts And Tutorials. Dear future Masters of Angular 2 E2E Testing. 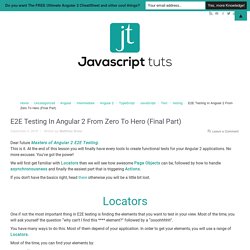 This is it. At the end of this lesson you will finally have every tools to create functional tests for your Angular 2 applications. Three Ways to Test Angular 2 Components – Angular 2. Learning Angular 2: Adding a Master Guild List Component to My Sandbox Application.