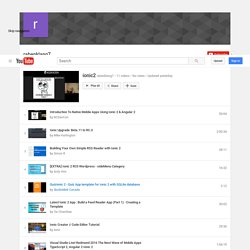 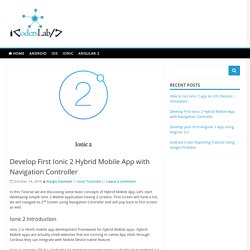 First screen will have a list, we will navigate to 2nd Screen using Navigation Controller and will pop back to first screen as well. Ionic 2 Introduction. Creating Role Based Authentication with Passport in Ionic 2 – Part 2. In this tutorial series, we are walking through how to create a role-based authentication system with Ionic 2 using Passport. 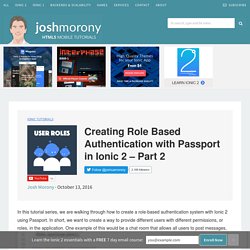 In short, we want to create a way to provide different users with different permissions, or roles, in the application. One example of this would be a chat room that allows all users to post messages, but only some users (moderators) are allowed to kick other users out. Review. Getting Started with Ionic 2 RC0, Firebase 3 + AngularFire 2. Let's start building an Ionic 2 RC0 app using Firebase 3 and AngularFire 2! 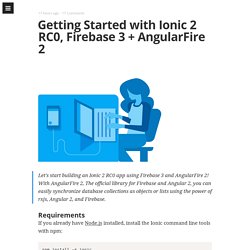 With AngularFire 2, The official library for Firebase and Angular 2, you can easily synchronize database collections as objects or lists using the power of rxjs, Angular 2, and Firebase. Requirements If you already have Node.js installed, install the Ionic command line tools with npm: npm install -g ionic. Ionic Creator Tutorials // Ionic Auth Part 2 // Integrating with Ionic Auth & Gravatar. Aa. Joshmorony - Build Mobile Apps with HTML5. Most applications rely heavily on data, so it’s important that we know how best to manipulate that data in order to make it do what we want. 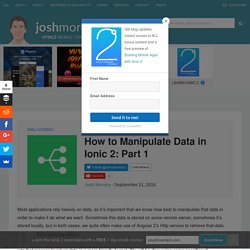 Sometimes this data is stored on some remote server, sometimes it’s stored locally, but in both cases, we quite often make use of Angular 2’s Http service to retrieve that data. In this tutorial, we are going to discuss how exactly the http.get() method works, and how we can hook into that process to return data in a more friendly format. We will be discussing some specifics of observables, and also introduce the concept of mapping. We will expand on these concepts in a more general sense in Part 2 of this tutorial series, and we will also introduce two more ways to manipulate data in your applications: filtering and reducing. Multi-Page Applications with Native Features using Ionic 2.

Not too long ago I wrote about getting started with Ionic 2. 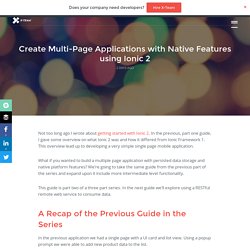 In the previous, part one guide, I gave some overview on what Ionic 2 was and how it differed from Ionic Framework 1. This overview lead up to developing a very simple single page mobile application. What if you wanted to build a multiple page application with persisted data storage and native platform features? We’re going to take the same guide from the previous part of the series and expand upon it include more intermediate level functionality. Joshmorony - Build Mobile Apps with HTML5. Ionic 2: Build a Todo List Application from Scratch. Ionic 2 Quickstart Tutorial 2016. Mastering the Ionic Framework: Learn to Build & Deploy Native Speed HTML5 Based Apps. Web development technologies have evolved at an incredible clip over the past few years. 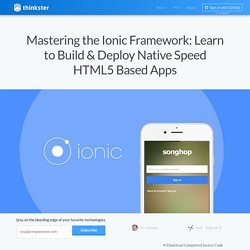 We've gone from rudimentary DOM manipulation with libraries like jQuery to supercharged web applications organized & powered by elegant MV* based frameworks like AngularJS. Pair this with significant increases in browser rendering speeds, and it is now easier than ever before to build production quality applications on top of Javascript, HTML5, and CSS3. Build a Mobile App with Angular 2 and Ionic 2. The Ionic Framework enables the creation of cross platform mobile applications with HTML, CSS and JavaScript(Angular).

Ionic 1 was built with Angular 1.*, and with the upcoming release of Angular 2, the second major version of Ionic is also imminent. Ionic 2 is still in beta, but if you are looking to build cross-platform apps quickly, and you already know Angluar 2 or JavaScript, this guide will get you up to speed. Ionic Framework Tutorial. In this tutorial, you learn how to build a native-like mobile application with Ionic and AngularJS. 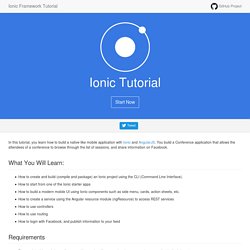 You build a Conference application that allows the attendees of a conference to browse through the list of sessions, and share information on Facebook. What You Will Learn: How to create and build (compile and package) an Ionic project using the CLI (Command Line Interface).How to start from one of the Ionic starter appsHow to build a modern mobile UI using Ionic components such as side menu, cards, action sheets, etc.

How to create a service using the Angular resource module (ngResource) to access REST servicesHow to use controllersHow to use routingHow to login with Facebook, and publish information to your feed Requirements. Create Your First Mobile App with AngularJS and Ionic. The Scotchmas Day 4 giveaway can be found at the end of this article. 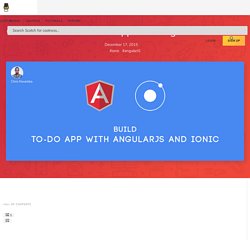 In the past years, making a mobile app involved being good with the native language you are creating an app for. That means Objective C for iOS, Java for Android, and C# for Windows Phone. That is so demoralizing to have to learn all those technologies. My dreams of being a mobile app developer became a reality after I realized I could actually create mobile apps using the skills I had that were web technologies. Create Your First Mobile App with AngularJS and Ionic. Build Your First Mobile App With Ionic 2 & Angular 2 - Part 1. A year ago I wrote a series of posts on how to build a mobile app with Ionic. 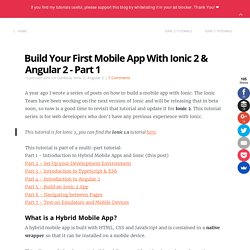 The Ionic Team have been working on the next version of Ionic and will be releasing that in beta soon, so now is a good time to revisit that tutorial and update it for Ionic 2. This tutorial series is for web developers who don't have any previous experience with Ionic. This tutorial is for Ionic 2, you can find the Ionic 1.x tutorial here. Ionic Framework Tutorial 1: Create Mobile Apps Using Ionic (Intro)

Angular 2 Series: Components. Welcome to the second post in our series on Angular 2. If you missed the first post, check out the quick Intro to Angular 2. In this post, we are going to talk about Components, which elegantly replace the mix of controllers, scopes, and directives from Angular 1. The death of scope If you missed Igor and Tobias’ great talk at ngEurope in October, they quite dramatically proclaimed the death of a variety of Angular 1 concepts, including controllers and $scope. I was there, I and remember the gasps and nervous laughter from the crowd as a series of ominous gravestones flashed on the screen:

A Beginners Guide to Ionic 2 Mobile Applications. When it comes to mobile application development, there are many different routes you can choose. You can choose a native solution, using the Android SDK and Java or iOS with Objective-C, but in both these scenarios there is a multiple language requirement. A more efficient and possibly cheaper solution would be to use a cross platform framework that lets you deploy to various platforms using a single set of code. There are numerous cross platform frameworks available, but one of the more popular is Ionic Framework. It first made an appearance a few years back, and in my personal opinion, helped make AngularJS as successful as it’s been. Building an Ionic App with Offline Support, Part 2. In the previous post, we added basic offline support to a weather app by storing data locally with SQLStorage.

However, even this can fail. There are times where we may not be able to retrieve data from the database or from the network. Generator-M-Ionic - JS fatigue and transitioning to Typescript, Angular 2 & Ionic 2. This is a guest post by Jonathan Grupp Generator-M-Ionic is an open source collection of advanced workflows for building cross-platform HTML5 mobile apps with Ionic. This article gives a quick introduction into the generator's capabilities and refers to more elaborate resources for those willing to work with it. As we're transitioning to the next generation technology stack with Typescript, Angular 2 and Ionic 2, we're trying to overcome JS fatigue and JS tooling fatigue and bring the development of the different tools closer together.

You can help us by joining the discussion! What's Generator-M-Ionic for? Build a Mobile App with Angular 2 and Ionic 2. An Introduction to Ionic 2, Typescript, and the WP-API.