How to create your own TypeScript type definition files (.d.ts) and contribute to DefinitelyTyped on GitHub. It is Saturday evening and it’s raining a lot in Ireland. 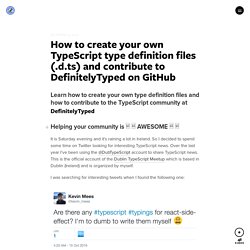 So I decided to spend some time on Twitter looking for interesting TypeScript news. Over the last year I’ve been using the @DubTypeScript account to share TypeScript news. This is the official account of the Dublin TypeScript Meetup which is based in Dublin (Ireland) and is organized by myself. I was searching for interesting tweets when I found the following one: When I saw this tweet I was automatically thrilled because it is AWESOME when you find an opportunity to help the community like this.

I really think it is sad that only a small percentage of all the software engineers out there contribute to open source. Hoodie aims to be one of open source’s most diverse and inclusive communities - opensource.com And the “Your First PR” initiative: Your First PR helps you get started contributing to Open Source by showcasing great starter issues on Github and elsewhere. - Your First PR Head to the main file to see its source code. TypeScript Tutorial. How to create your own TypeScript type definition files (.d.ts) and contribute to DefinitelyTyped on GitHub.

Learn TypeScript for beginners. TypeScript 2.0 Awesomeness. Over the past few years, TypeScript has iterated and greatly improved developer ergonomics. 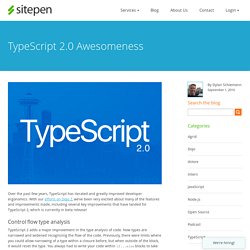 With our efforts on Dojo 2, we’ve been very excited about many of the features and improvements made, including several key improvements that have landed for TypeScript 2, which is currently in beta release! Control flow type analysis TypeScript 2 adds a major improvement in the type analysis of code. Now types are narrowed and widened recognizing the flow of the code. Previously, there were limits where you could allow narrowing of a type within a closure before, but when outside of the block, it would reset the type. With TypeScript 2.0, the code is statically analyzed and types are narrowed, widened or changed in line with the logic of the code. ES2015 (ES6) + Typescript Tutorial - 24 - Introduction to Modules. ES2015 (ES6) + Typescript Tutorial - 27 - Default Exports. Developing An Angular 2 Application With TypeScript. Download source - 9.4 MB Introduction This article is part 2 and a follow up to the previous article Developing And Deploying An Angular 2 Application with Visual Studio 2015 which discussed how to configure Visual Studio Professional 2015 for Angular 2 development and production deployment. 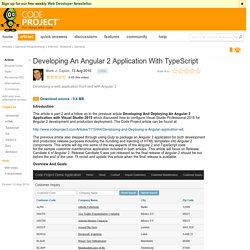 The Code Project article can be found at: The previous article also stepped through using Gulp to package an Angular 2 application for both development and production release purposes including the bundling and injecting of HTML templates into Angular 2 components. This article will dig into some of the key aspects of the Angular 2 and TypeScript code for the sample customer maintenance application included in both articles. Get started with writing TypeScript today! Tabs vs. spaces isn’t the only big discussion point in the world of programming. 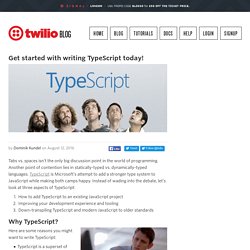 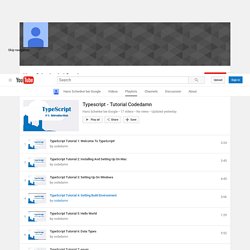 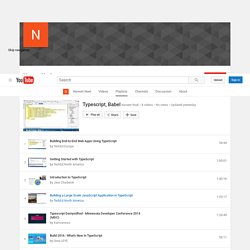 Working... TypeScript Tutorial 11: Function Overloading. Configuring Webpack with Typescript ← David Barreto. In a previous post, “A Gentle Introduction to Webpack“, we explore how to setup a very basic Webpack build to transpile ES6 code to ES5. 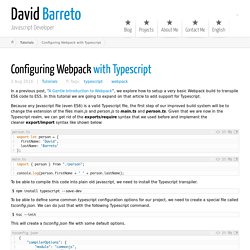 In this tutorial we are going to expand on that article to add support for Typescript. Because any Javascript file (even ES6) is a valid Typescript file, the first step of our improved build system will be to change the extension of the files main.js and person.js to main.ts and person.ts. Given that we are now in the Typescript realm, we can get rid of the exports/require syntax that we used before and implement the cleaner export/import syntax like shown below: import { person } from ". 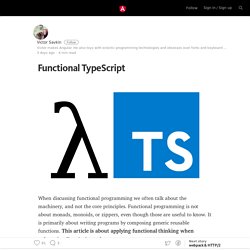 Functional programming is not about monads, monoids, or zippers, even though those are useful to know. It is primarily about writing programs by composing generic reusable functions. Learn TypeScript in 30 Minutes. Danny Markov Today we’re going to take a look at TypeScript, a compile-to-JavaScript language designed for developers who build large and complex apps. 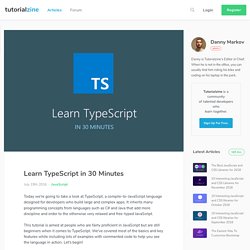 It inherits many programming concepts from languages such as C# and Java that add more discipline and order to the otherwise very relaxed and free-typed JavaScript. This tutorial is aimed at people who are fairly proficient in JavaScript but are still beginners when it comes to TypeScript. We’ve covered most of the basics and key features while including lots of examples with commented code to help you see the language in action. Thinkshout. An Introduction to TypeScript: Static Typing for the Web. “Oh, I’m using Gulp because of reason A” or “Oh, I’m using Redux because of reason B”. 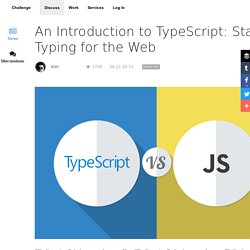 You hear these sorts of things from front-end developers all the time. It’s become fashionable to use new ways of improving on JavaScript’s old faults and that’s not a bad thing; even ES2015 has been a pretty determined attempt at righting those wrongs and it’s currently the official version of the language. One of those attempts at creating a better experience with JavaScript, which we’ll dive into here, is TypeScript. It’s a promising change to our favorite language that’s likely to make a bigger splash in JavaScript’s future. Introduction to TypeScript. Intro to Immutable Record with TypeScript. TypeScript Deep Dive. I've been looking at the issues that turn up commonly when people start using TypeScript.

This is based on the lessons from StackOverflow / DefinitelyTyped and general engagement with the TypeScript community. Typescript debugging inside Chrome browser. Angular 2 and TypeScript: Development Tool Selection. By now, there is a growing number of .NET developers that are considering frameworks like Angular 2 for their next project. I’m assuming if you’re reading this, you are one of them. It is likely you are new to front-end development using only JavaScript (or TypeScript). You may be used to bundling JavaScript with an existing ASP.NET project. You may have seen the success of Angular 1 and heard some of the hype surrounding that framework. Now, with the impending release of Angular 2 it seems like a good time to take the leap and try your first web project that doesn’t use C# or VB.NET. Setting Up a Basic Typescript Environment ← David Barreto.

In this blog post we are going to cover a basic setup for working with Typescript and Typings in a Node environment. This is the starting point of many other post on this blog. The first step in the process is to create a working directory. We are going to use the generic name project-name but feel free to use a more meaningful name for your own project. TypeScript – Is It Worth Using? Easily build powerful user management, authentication, and authorization into your web and mobile applications.Download this Forrester report on the new landscape of Customer Identity and Access Management, brought to you in partnership with Stormpath. CoffeeScript was the first compiler that appeared on my radar a few years back, and after spending a bit of time playing around with it, I wasn’t convinced.

Yes, it has some niceties that make working in JavaScript easier, but unlike JavaScript, it’s not something that the majority of developers have dealt with. It’s not a syntax most developers have dealt with. And the learning curve is arguably bigger than just jumping into JavaScript. Now this isn’t an attack on CoffeeScript at all; it’s an observation on all the various “languages” and abstractions that require some form of “compiler” to turn them into something the browser understands. I was wrong about TypeScript. Here is why. My initial thoughts after TypeScript was announced When Anders Hejlsberg is working on something, that project automatically has my full attention. He has close to 30 years of experience in building compilers and designing programming languages.

You can read more about his involvement in various programming languages on his Wikipedia page. When I heard he was working on a language that is transpiled (aka source-to-source compiled) to JavaScript, I initially felt disappointed. Microsoft is going the Dart/CoffeeScript route and rejecting the ECMAScript standard. The JAX London Conference is a three-day conference for cutting-edge software engineers and enterprise-level professionals. How To Understand TypeScript. An Introduction to TypeScript: Static Typing for the Web. This article was peer reviewed by Julian Motz and Ryan Chenkie. Thanks to all of SitePoint’s peer reviewers for making SitePoint content the best it can be!

“Oh, I’m using Gulp because of reason A” or “Oh, I’m using Redux because of reason B”. You hear these sorts of things from front-end developers all the time. It’s become fashionable to use new ways of improving on JavaScript’s old faults and that’s not a bad thing; even ES2015 has been a pretty determined attempt at righting those wrongs and it’s currently the official version of the language. One of those attempts at creating a better experience with JavaScript, which we’ll dive into here, is TypeScript. TypeScript Compilation: Getting Started. Writing a Log4J alternative in TypeScript - Gary Sieling. TypeScript Generator Maven Plugin – typescript-generator:generate.

An Introduction to TypeScript: Static Typing for the Web. Migrating a 10,000-line legacy JavaScript codebase to TypeScript. Summary I recount my experiences migrating the 6.5-year-old, 10,000-line codebase of Python Tutor from “old-school” HTML/CSS/JavaScript to a modern 2016-era development workflow using Webpack and TypeScript. I started working on Python Tutor in January 2010, about 6.5 years ago. Since then, its web-based frontend has grown to around 10,000 lines of JavaScript code (the vast majority written by me) spread throughout multiple files, interfacing with several versions of third-party libraries, and imported in idiosyncratic orders by different HTML files with a tangle of script tags.

Even though the system works well and is now supporting thousands of daily active users from around the world, its codebase has gotten to a point where its complexity is too much for me to stand. The Future of Declaration Files. Declaration files (.d.ts files) are a fundamental part of using existing JavaScript libraries in TypeScript, but getting them has always been a place where we’ve known there was room for improvement. TWC9: Build & Edge on Demand, VS Code 1.0, React Native UWP, Windows 10 Updates and more... Bits and Bytes: Getting Started with TypeScript. Using TypeScript to write your JavaScript app. AngularJS is a great framework for writing JavaScript apps! However, it's still JavaScript you're writing, so it isn't (strictly) typed.

Episode 65: TypeScript with Jonathan Turner. TypeScript, WTF?! If you hang around in the JavaScript community, along with left-pad you almost have certainly heard of TypeScript. Having large frameworks, like Angular 2 and EmberJS embrace it have given it a lot of focus. Static typing: the good parts - Jos de Jong. Tl;dr So far I’ve been hesitant to embrace static type checkers like TypeScript. It’s because I associated static type checking with the restrictions and interoperability issues that I know from Java and C++. Anders Hejlsberg, Steve Lucco, and Luke Hoban: Inside TypeScript.