How to make a horizontal paging UIScrollView with Auto Layout in Storyboards [Swift] Update August 2016: Fully updated for Xcode 8 and Swift 3 Since Auto Layout came to life, the task of making adaptive user interfaces that support all screen sizes, has become a piece of cake. 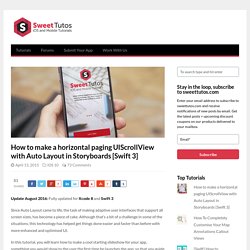 Although that’s a bit of a challenge in some of the situations, this technology has helped get things done easier and faster than before with more enhanced and optimised UI. In this tutorial, you will learn how to make a cool starting slideshow for your app, something you would show to the user the first time he launches the app, so that you guide him over the main features of your app. These kind of slideshows are famous and are implemented in many apps with different fancy layouts and animations. Without further ado, let’s slide in Open up Xcode, select “File\New\Project” from the menu, choose the “Single View Application” template and make sure the default language is Swift. Select ‘Main.storyboard’ from the ‘Project navigator’ view, then choose one of the device sizes from the “View as” panel. Putting a UICollectionView in a UITableViewCell in Swift - Ash Furrow. A few years ago, I wrote this post on putting a collection view inside a table view cell. 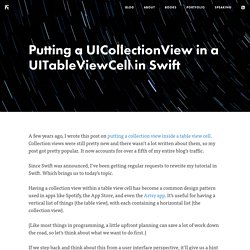 Collection views were still pretty new and there wasn’t a lot written about them, so my post got pretty popular. It now accounts for over a fifth of my entire blog’s traffic. Since Swift was announced, I’ve been getting regular requests to rewrite my tutorial in Swift. Which brings us to today’s topic. Having a collection view within a table view cell has become a common design pattern used in apps like Spotify, the App Store, and even the Artsy app.

(Like most things in programming, a little upfront planning can save a lot of work down the road, so let’s think about what we want to do first.) If we step back and think about this from a user interface perspective, it’ll give us a hint at how we can structure our code, too. So the collection view cells sit within the collection view (just like they normally do). OK, cool. There are two basic approaches here. Vsouza/awesome-ios. Objective-C & Cocoa Dev Блог. Learn to Code iOS Apps with Swift Tutorial 1: Welcome to Programming. If you're new here, you may want to subscribe to my RSS feed or follow me on Twitter. 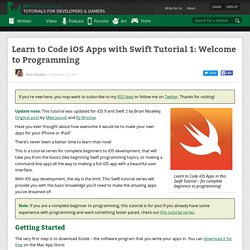 Thanks for visiting! Learn to Code iOS Apps in this Swift Tutorial – for complete beginners to programming! Update note: This tutorial was updated for iOS 9 and Swift 2 by Brian Moakley. Original post by Mike Jaoudi and Ry Bristow. Have you ever thought about how awesome it would be to make your own apps for your iPhone or iPad? There’s never been a better time to learn than now! This is a tutorial series for complete beginners to iOS development, that will take you from the basics (like beginning Swift programming topics, or making a command-line app) all the way to making a full iOS app with a beautiful user interface. With iOS app development, the sky is the limit. Note: If you are a complete beginner to programming, this tutorial is for you! Getting Started The very first step is to download Xcode – the software program that you write your apps in.

Introduction to Playgrounds Victory is yours! Url?sa=t&rct=j&q=&esrc=s&source=web&cd=5&ved=0ahUKEwj21czUjZ3KAhXUc44KHRQsBMMQFgg9MAQ&url= Building an Instagram-Like App with Parse and Swift. Parse, the mobile app platform, has one particularly interesting product: Parse Core. 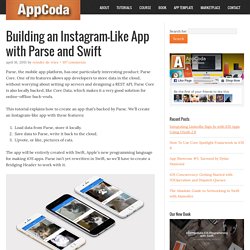 One of its features allows app developers to store data in the cloud, without worrying about setting up servers and designing a REST API. Parse Core is also locally backed, like Core Data, which makes it a very good solution for online-offline back-ends. This tutorial explains how to create an app that’s backed by Parse. We’ll create an Instagram-like app with these features: Load data from Parse, store it locally.Save data to Parse, write it back to the cloud.Upvote, or like, pictures of cats. 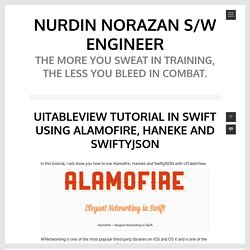