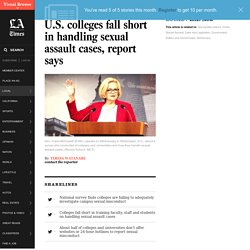 The survey, which yielded responses from 319 four-year, public and private campuses, was conducted by U.S. Sen. Claire McCaskill (D-Mo.). The former sex crimes prosecutor has helped lead growing federal efforts to crack down on campus sexual assault. "Unfortunately, the disturbing bottom line of this unprecedented, nationwide survey, is that many institutions continually violate the law and fail to follow best practices in how they handle sexual violence," she said in a statement. At least four California campuses are under investigation by the U.S. Among the findings: How Campus Sexual Assaults Came To Command New Attention. The Debate: How Should College Campuses Handle Sexual Assault?

In 2011, Gwen Florio, a dogged reporter for Missoula, Montana’s local paper, reported on a number of rapes involving University of Montana football players that had gone unpunished by school or local authorities. 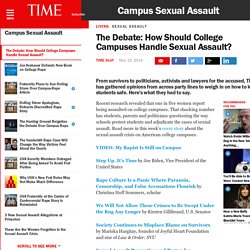 Her stories eventually led to a Justice Department investigation into the alleged mishandling of 80 reported rapes in Missoula over a period of three years; the investigation resulted in settlements between the federal government, local law enforcement and university officials. But the circumstances led Missoula — a laid-back, academic town of only 70,000 — to be referred to in the ensuing national press America’s “rape capital.” Now synonymous with its recent legacy, “Missoula” has become the title for a new book by best-selling author Jon Krakauer. Krakauer said in an interview that his working title was What Happened in Missoula, but he ended up preferring the one-word title his publisher and editor gave the book because it was “non-sensational” and “almost academic.”

How One College Handled a Sexual Assault Complaint. GENEVA, N.Y. — She was 18 years old, a freshman, and had been on campus for just two weeks when one Saturday night last September her friends grew worried because she had been drinking and suddenly disappeared. 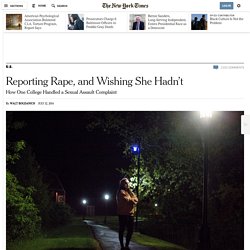 Around midnight, the missing girl texted a friend, saying she was frightened by a student she had met that evening. “Idk what to do,” she wrote. “I’m scared.” When she did not answer a call, the friend began searching for her. In the early-morning hours on the campus of Hobart and William Smith Colleges in central New York, the friend said, he found her — bent over a pool table as a football player appeared to be sexually assaulting her from behind in a darkened dance hall with six or seven people watching and laughing. Sexual Assault Under-Reported on U.S. College Campuses: Study. 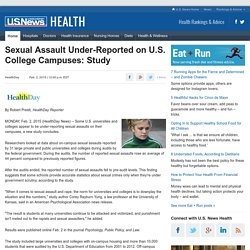 Researchers looked at data about on-campus sexual assaults reported by 31 large private and public universities and colleges during audits by the federal government. During the audits, the number of reported sexual assaults rose an average of 44 percent compared to previously reported figures. After the audits ended, the reported number of sexual assaults fell to pre-audit levels. This finding suggests that some schools provide accurate statistics about sexual crimes only when they're under government scrutiny, according to the study. "The result is students at many universities continue to be attacked and victimized, and punishment isn't meted out to the rapists and sexual assaulters," he added. Results were published online Feb. 2 in the journal Psychology, Public Policy, and Law. How College Health Centers Help Students Succeed. Study: 6 percent of college presidents say sexual assault is common on their campus. After a string of high profile sexual assault cases in the last year, like that of Emma Sulkowicz at Columbia University, national discussion about the handling and prevalence of sexual assault has made universities reevaluate how they tackle allegations. 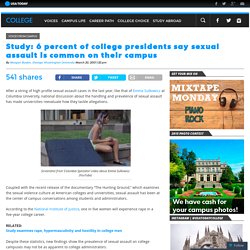 Screenshot from ‘Columbia Spectator’ video about Emma Sulkowicz (YouTube) Coupled with the recent release of the documentary “The Hunting Ground,” which examines the sexual violence culture at American colleges and universities, sexual assault has been at the center of campus conversations among students and administrators. According to the National Institute of Justice, one in five women will experience rape in a five-year college career. Campus Sexual Assault. University Survey Highlights Role of ‘Verbal Coercion’ in Sexual Assault A Controversial Proposal to Fix Fraternities: Keep the Women Out This Is the New Frontier in the Fight Against Campus Rape. 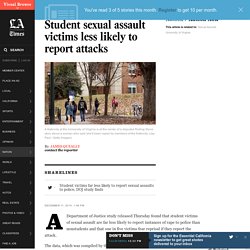 The data, which was compiled by the Bureau of Justice Statistics and based on information collected through the National Crime Victimization Survey, focused on 100,000 sexual assault victims between the ages of 18 and 24 who were attacked between 1995 and 2013. The data showed nonstudents in that age group were twice as likely to be victims of sexual assault; 32% of them reported their attacks to police, but only 20% of students did.

The report only accounted for victims who reported sexual assaults to police and did not include data on reports made to school officials or family members. The entire report can be viewed here. The U.S. Follow @JamesQueallyLAT for breaking news Copyright © 2015, Los Angeles Times.